The Curse of Scotland: The Nine of Diamonds’ Dark History

Gamblers have managed to invent nicknames for pretty much every card and card combination in the pack. The number, suit, color, game, and card combination all make a difference and there is slang to cover pretty much every eventuality. Some of these names are pretty ominous sounding. A pair of black aces combined with a pair of black eights makes up the dead man’s hand; the king of hearts is sometimes known as the suicide king; the two of spades can be called the Curse of Mexico. It is not always clear where these cards got their names, but there are usually some pretty interesting stories surrounding them. In this article, we are going to take a look at a card with a particularly worrying nickname: The Curse of Scotland. Although no one can ever be completely sure how the card got its name, there are some interesting real-life events in British history during the seventeenth and eighteenth centuries that are intertwined with the card’s dark past.

If you have ever played at one of the best casino poker sites, you’ll almost certainly have been dealt the nine of diamonds. What you may not know is that the card has a dark reputation. The nine of diamonds is commonly called The Curse of Scotland, or The Scourge of Scotland. There are numerous theories on how the card got its name, but they all seem to agree that if it is based on any real-life event, it must be around the Restoration period and Georgian era in Britain. Unbelievably, there are actually six top theories on how this fascinating card got stuck with such a dark name. Some people dismiss them as myths, but a nickname has to come from somewhere! We will take a closer look at the six legends and you can make up your own mind about which you think is the most likely source of The Curse of Scotland.

John Dalrymple and the Glencoe Massacre

Our first theory behind the nine of diamond’s nickname revolves around Sir John Dalrymple, 1st Earl of Stair. He was a Scottish politician and lawyer, living between 1648 and 1707. He was a powerful man and held a number of important offices, including Joint Secretary of State in Scotland from 1691 until 1695. He supported and pursued the unification of Scotland and England, which was an extremely unpopular stance with many of the general public. He was actually one of the main driving forces behind passing the Acts of Union that created the Kingdom of Great Britain. Unfortunately for him, he passed away before he was able to see the results of all his hard work. The treaty was agreed upon through a vote in the Scottish Parliament just a few days after Dalrymple’s death in January 1707.

Although his political contributions were of great importance, Dalrymple is often remembered for a far darker reason. He was closely involved with the Glencoe Massacre, and allegedly gave the authorization for the attack. After the Jacobite uprising of 1689-92 failed to put James II of England and VII of Scotland back on the throne, William III of England and II of Scotland – the new monarch – issued a royal pardon to the Scottish clans who agreed to pledge allegiance to him. Since Scotland had stood against the English monarchy for so long, and true Scottish loyalty was under question, it was decided that an example should be made of one of the clans. The Glencoe McDonalds were chosen for this example as they had a history of particular lawlessness. During the night on 13th February 1692, army forces attacked the clan and murdered over 30 members. Some managed to escape to the mountains but due to severe weather, more died whilst hiding out. The army force that attacked the McDonald clan had a conveniently large number of members of the Campbell clan in it, who were known for their strong rivalry with the McDonalds. This meant that at first it was believed that it was a clan-on-clan attack, rather than a government sanctioned massacre, supposedly signed off on by Dalrymple. He was forced to resign from his position as Secretary of State after the truth about the massacre came out due to public outcry.

This is an interesting history lesson, but where does the nine of diamonds fit into the story? Some believed that Dalrymple wrote the order for the Glencoe massacre on a playing card: the nine of diamonds. Apart from seeming like a fairly odd thing to do, there is actually proof that this is not the case. The actual written order still exists and is not written on a card! A more believable link between Dalrymple and the nine of diamonds is that his coat of arms has a blue saltire with nine yellow diamonds laid out in a cross shape, greatly resembling the appearance of the diamonds on the card. This is apparently where the card got its name – so this story goes.

The Duke of Cumberland and the Battle of Culloden

There is another historical figure who some believe is linked to the nickname The Curse of Scotland. Prince William, Duke of Cumberland (1721-1765) is remembered for his vital role in the Battle of Culloden in 1746. This battle effectively ended the Jacobite uprising known as Forty-Five Rebellion (as it took place in 1745) and the Duke and his troops were instrumental in the victory. He instructed his troops to show the rebels no mercy and earned himself the nickname Butcher Cumberland for his violent leadership. In a similar story to Dalrymple’s, there is a myth that the Duke of Cumberland’s order to show no mercy was written on a playing card, which was, of course, the nine of diamonds. However, the dates of these two occurrences make this version of the story impossible. The Curse of Scotland is first mentioned in 1708, written in The British Apollo. The Battle of Culloden took place 38 years later, so it cannot have been the inspiration for the nickname.

The British Apollo – the book in which the Curse of Scotland nickname can first be seen – states that royal regalia was decorated with precious stones; a fact which we know is true. It also says that “for Scotland’s Kings for many Ages, were observed, each Ninth to be a Tyrant”. While many would argue that many more monarchs than every ninth (or fewer, depending on how generous you are in your judgment) were a scourge to their people, others believe that these two quotes hold the true origin of the Curse of Scotland name. The diamond suit to link it to royalty, and the number nine for every ninth monarch who was a curse on the land.

Diamonds on a Crown 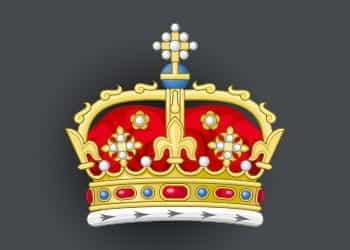 There are other stories that would have you believe that the diamonds on the playing card must link to royalty. There is a myth that nine diamonds were stolen from the Scottish crown, which resulted in a harsh tax on the people to raise funds to replace the missing stones. We know that the entire set of royal regalia went missing for over a century but there is no suggestion that some of the stones were taken out, and no record of this raised tax to replace them.

Another myth concerning royal jewels claims that most monarchs had ten diamonds in their crowns, but Scotland was only able to afford nine. This would have been a source of great shame to the proud Scottish people, but, again, there has been no evidence found to support this claim.

The book Brewer’s Dictionary of Phrase and Fable, published in 1870, has its own theories on where the phrase originated. Brewer suggests looking at past popular card games to find the source of the name. His first guess is linked to a nineteenth-century game called Pope John, which was particularly popular in Scotland. The nine of diamonds in this game was called The Pope, referring to Pope John VIII. Many Scottish reformers called Pope John VIII the antichrist, so it is plausible that they would also view him as the Curse of Scotland.

Another game which Brewer refers to is called Comette. The game was introduced to the Scottish court by Mary of Lorraine in the sixteenth century and became notorious for bankrupting numerous noblemen. The nine of diamonds was the winning card in the game, which also made it the card that caused various men’s ruin when they lost to it.

It’s All a Misinterpretation

Brewer’s Dictionary of Phrase and Fable has another suggestion for how the nine of diamonds got its name. It proposes that the word “curse” has been misinterpreted and should actually be the word “cross”, resulting in the nine of diamonds being called The Cross of Scotland instead. The author toys with the idea that this is a plausible theory since the layout of the diamonds on the card bear a strong resemblance to the St Andrews saltire on the Scottish flag.

Of course, if this was the case – as Brewer himself concludes – then really any playing card of the number nine could have the same name since there is no reason why the nine of diamonds would match the shape better than any other suit.

As you can see, none of these theories are perfect. Let’s have a quick glance over each one again:

John Dalrymple and the Glencoe Massacre: this theory suggests that Dalrymple wrote his order for the Glencoe massacre on a playing card. Not only is this unlikely, there is irrefutable proof that it is untrue, since the written order has been rediscovered. There is also the suggestion that the Dalrymple coat of arms – belonging to a man despised for his part in the massacre – is the inspiration behind the name.

The Duke of Cumberland and the Battle of Culloden: again, this theory can be easily disproven. The Curse of Scotland could not have originated from the Duke writing merciless orders on the nine of diamonds, because the events took place almost four decades after the card’s nickname was already being used.

Royal Symbolism: some of the Scottish monarchs may have been severely dislike, but it is still a bit of a stretch to say that every ninth (and only every ninth) monarch was a scourge on Scotland.

Diamonds on a Crown: while there are some interesting stories surrounding royalty and their jewels, none of them have a shred of evidence to support the theory that they had anything to do with the naming of the playing card.

Brewer’s Games: Brewer’s theory that the nine of diamonds took the name The Curse of Scotland due to its ruinous appearance in older games is certainly interesting. It does make you wonder why the name The Pope did not stick if that is who the card is still named after, but it is impossible to say whether or not these games had anything to do with the long-standing nickname.

It’s All a Misinterpretation: while it can be argued that the nine of diamonds resembles the Scottish saltire, this theory offers no explanation as to why it is only the nine of diamonds holding the title, when all three other suits look just as similar, or dissimilar, to the cross.

It is quite clear that we will never know for sure where the nine of diamonds got its name, The Curse of Scotland. However, there are certainly some interesting and entertaining stories to consider. There are plenty of dark moments in Scotland’s history which could have inspired the name, but it is also possible that it wasn’t taken from real-life events at all. The Curse of Scotland will remain a mystery, at least for the time being.

Gambling Quotes: Cool Casino Sayings We Could Learn From

The Story of Poker Genius - Nick ‘the Greek’ Dandolos