How Gamblers Try to Get Good Luck

The richest gamblers have attained success by formulating effective strategies, remaining calm under pressure, and honing their skills to a fine point. Other capable individuals have utilized sophisticated software, mathematical knowledge and the theory of probability to ensure that, more often than not, they come out ahead. Even so, there are still those who swear by lady luck and abide by a smorgasbord of superstitious behaviors in hopes that the outcome will be affected by such weird and wonderful rituals. Let’s look at the most popular ways that gamblers have attempted to curry favor with the Fates.

Humans are pretty inclined towards mysticism and the ethereal; look at the extent of religious faith around the globe. While we have, thankfully, ceased sacrificing virgins and burning people suspected of witchcraft, there are nonetheless plenty of people who will do their utmost to avoid black cats, breaking mirrors or walking underneath ladders. When it comes to casino games, whether they be land-based or online games like video slots, the fact that so much of the result is down to chance makes for a degree of uncertainty that many try to resolve via unconventional methods. After all, there really is no 100% foolproof strategy, system or skill that can guarantee success. Irrational though it undoubtedly is, this belief in superstition still influences many a gambler.

In psychology, this is the erroneous belief that asserts a reciprocal relationship between a series of past results and a series of forthcoming results. For instance, adherents believe that if they flip a coin nine times and nine times it lands on heads, then the odds are that the tenth time they flip the coin it will come up tails. In reality, the probability remains 50-50; the prior outcomes have no effect on any subsequent outcome. The Gambler’s Fallacy is a specific misapplication of the Law of Averages, which holds that a particular event is inevitable merely because it is statistically possible e.g. the Washington Nationals must win the World Series eventually. Lots of bad strategies are used because of this false belief. If you want to avoid making rash decisions, check out our strategy pages for blackjack betting and roulette betting.

In 1946, mathematician Stanislaw Ulam designed what became known as the ’Monte Carlo Simulation’, thus proving the wrong-headedness of this interpretation. Analyzing the random results of casino games, he developed a theory which explained that there is no correlation between outcomes; even when a roulette ball has repeatedly landed on black for dozens of spins in a row, it remains just as likely that it will land on black in the following spin.

Here the idea is that there is a kind of karmic balance at play; should you find fortune at the tables, it means that you will suffer misfortune in relationships. Yin and yang, of sorts. However, the evidence for this is sketchy to say the least, with a number of gamblers enjoying both tremendous success and romantic fulfilment. Take billionaire Bill Benter, who has a loving wife and child, or card counting pioneer Edward Thorp, who made millions and enjoyed a happy marriage lasting over 50 years. Then again there is also Dan Bilzerian, whose prosperous exploits were accompanied by wild romantic misadventures involving violence, models and porn stars, so… This one is still open to interpretation, shall we say. 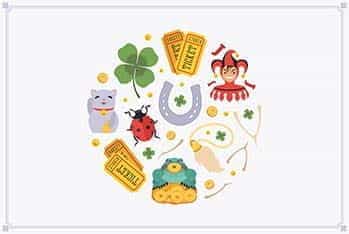 Many a gambler possesses an item to which has been assigned the formidable task of overcoming all logic in influencing the result of a game. These lucky charms are incredibly varied, with different cultures holding different symbols and objects to be supernaturally powerful, but the most popular ones are four-leaf clovers, horseshoes and rabbit’s feet. There are also those who believe that a specific garment will bring them luck, and will wear it every time papa needs a new pair of shoes. Hopefully they give such items of clothing a wash now and again, but don’t hold your breath on that one.

Then there are the numerous personal tics or routines that some gamblers perform in order to attract good fortune. These actions are usually carried out immediately before betting, dealing, rolling or spinning. Whether it’s the seemingly universal crossing of fingers, obsessive stacking of chips, or rubbing of a charm, all options are attempted. Some of the most popular rituals include blowing on dice, calling out a number or card, knocking on wood and, our particular favorite, kissing a companion.

Speaking of which, a partner whose entire purpose is to bring good luck often accompanies the more superstitious gambler. Essentially just a lucky charm with higher brain function and a respiratory system, such a companion appeases the gambling gods in ways that are difficult to comprehend but doubtless absolutely vital to the success of the entire enterprise. However, anyone who wishes to avail of one of these individuals is taking a fairly obvious risk; the lucky partner might just sashay off with the winnings.

There are numerous (heh) numbers that hold significance to different cultures, and certain digits are imbued with immense power by peoples all over the world. For whatever reason, this is a superstition that has really taken root in everyday life, with skyscrapers in the West often simply eschewing a 13th Floor and similarly tall buildings in Japan rarely featuring a 4th or 9th Story. German airline Lufthansa not only avoids having a row 13 on its passenger aircraft, but also 17; in certain countries, such as Italy and Brazil, the latter is considered unlucky.

7 is widely considered to be a lucky number in the West, hence its role in slot machines, while 15 symbolizes good fortune across many Spanish-speaking countries. Meanwhile, across the Far East, it is the number 8 that has good luck attached; this is the reason why the Beijing Olympics began on August 8th, 2008. Many people play the lottery with numbers that are of sentimental value to them personally, such as birthdays of loved ones, and numerologists rake in money telling the gullible which numbers they should pick in order to strike gold.

Similarly, particular colors can be seen as lucky or unlucky, with red considered extremely positive in China. Infamously, when Malaysian businessman Vincent Tan took over the Welsh soccer team Cardiff City, he changed their colors from blue to red, prompting considerable uproar. Was this out of superstition, or was he operating on the belief that the club would be more marketable in Asia if they wore red? Either way, the outcry from the fans made him reverse his decision. The episode shows the power that different colors hold though, and gamblers often have a particular favorite that they believe brings them good luck. 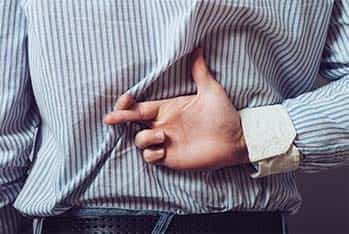 Dressing in lucky apparel and looking out for numbers of good fortune is all very well, but gamblers also have to stick to tried, trusted and traditional behavior if they want to keep kismet onside. Some of the rules in this area are downright contradictory; a lot of players insist that leaving the table during a game negatively affects their chances of winning, while others believe that briefly moving away or even looking away helps the odds.

It is common knowledge that crossing fingers is a gesture aimed at maximizing good luck, but to cross one’s legs while making a bet has the opposite effect. The notion is that with this action the gambler is ‘crossing out’ any good fortune he or she might otherwise have had. Keeping an upright sitting position with both feet firmly on the floor is also doubtless good for the posture, so all the more reason to avoid any leg-crossing faux pas.

While less widely known, there is a superstition that entering a casino via the same means through which those inside leave brings bad luck. The idea is that the departing customers, having supposedly lost most if not all of their bets, somehow infect the new arrival with their poor fortune. Another form of entrance that caused consternation to Chinese gamblers was the entrance to the MGM Grand; it resembled a lion’s gaping mouth which implied that players would be eaten alive. By popular demand it was eventually redesigned, and the clientele could rest easy that while they might lose their money at least they would not be devoured.

Counting money at the table is frowned upon, as it is commonly believed that pride comes before a fall so to resist the urge insures the gambler against future losses. It is also considered more polite to the other players present and gives off the impression of competence; a good gambler knows how much he or she has without the need to count.

Gambling superstitions are just as quirky, bizarre and interesting as they are in all other areas of life, varying from place to place, and some are incredibly personal. Certain charms and rituals that are lucky to some are considered the worst possible fortune to others, and meanings are interpreted differently across nationalities, ethnicities and creeds. Therefore, the most important thing that any gambler can do is be respectful towards the habits and eccentricities of fellow players.

Individuals have unique ways of giving themselves hope, and it is common courtesy to indulge these methods even if we don’t endorse them. While for some gamblers common sense, rationality and logic are the name of the game, there are invariably those who ascribe immense significance to things which would otherwise appear small and trifling.

So, whatever you believe brings you good luck, make sure to be considerate gamblers at all times.