The Most Fascinating Facts About Playing Cards

From card tricks to tactics, you might think you know everything there is to know about playing cards. But did you know that they can traced all the way back to China’s Tang dynasty? Playing cards have been around for nearly two millennia, and in that time have had a varied history around the world. There’s a bot more to playing cards than first meets the eye. Let’s delve into that history and learn some of the most fascinating facts about playing cards. 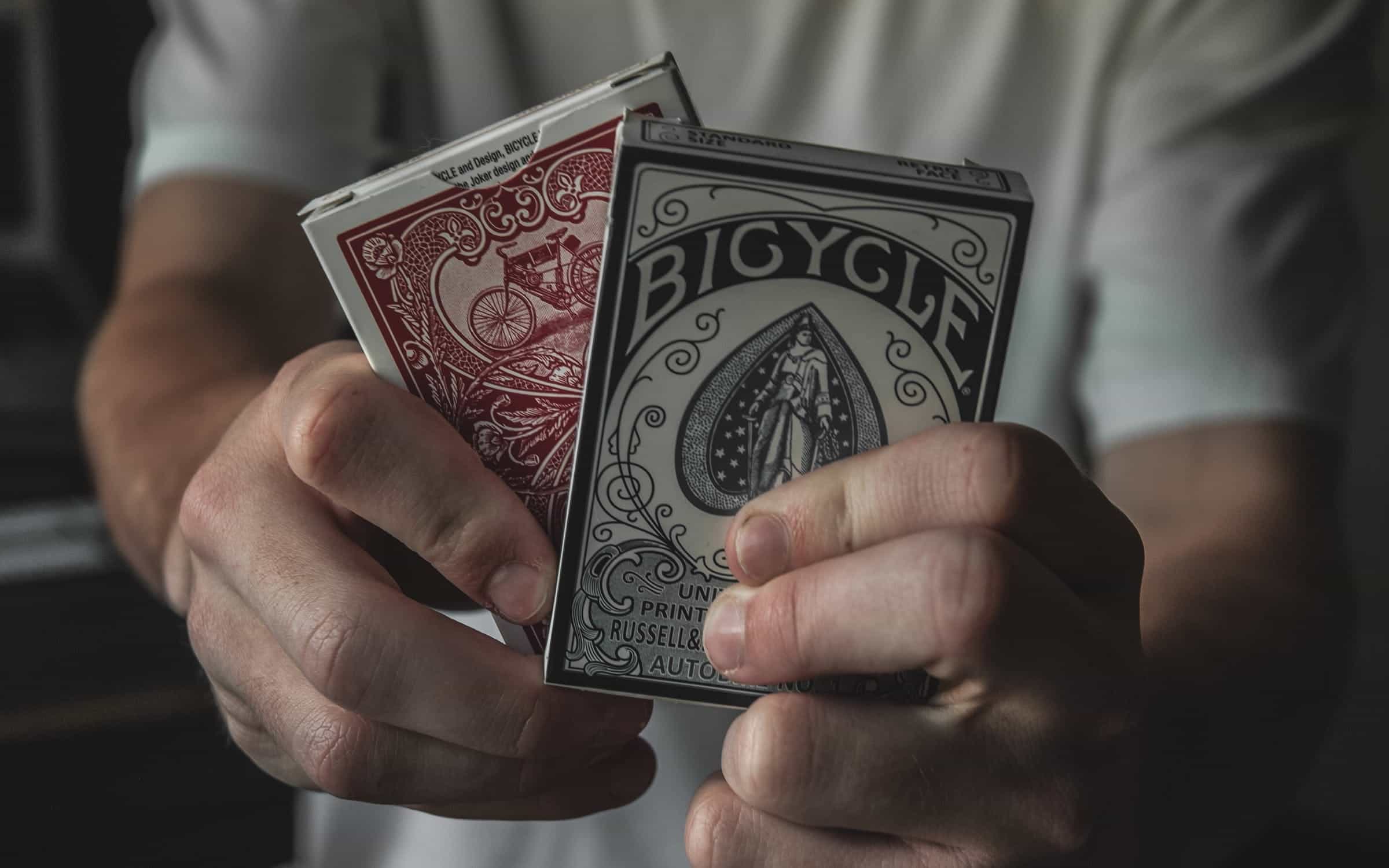 You might think of playing cards as a Western phenomenon, but their roots actually lie further east in China. It is said that the earliest card game dates all the way back to the 9th century, and has been written about in texts written at the time. It was known as the ‘Game of Leaves’, although it was played with printed pages and dice. The rules have long been lost in the mists of time, but many more card games followed. These games involved drinking, with forfeits and instructions printed on the cards. Bottoms up!

Playing cards have not always been the uniform shape we recognize today. In their earliest incarnations they were actually tiles a little like dominos. Egyptian Mamluk cards had a long shape and were covered in hand painted ornate Moorish designs. In Persia round Ganjifa cards were played with. They were often hand-painted, but some ornate versions were made from ivory or tortoise shell. European cards tended to sport hand painted designs which illustrated scenes, a little like tarot cards. The invention of Gutenberg’s printing press in the 15th century allowed playing cards to be produced more easily, and so they grew in popularity.

It wasn’t until cards games moved into Europe that four suits came into play. These suits aren’t what you’d recognise by today’s standards though. In 1365 card players in Southern Europe played with Mamluk suits originating from Egypt. These cards illustrated swords, cups, coins and polo-sticks. As the century marched on, so did the card games, all across Europe. The suits varied from country to country, but France paved the way for the modern card deck. In 1480, the French were playing with clovers, tiles, hearts and pikes. These suits are now widely known as clubs, diamonds, hearts and spades, but the imagery remains much the same. So, whether you are playing blackjack or baccarat online, just remember that the cards on the screen in front of you have looked pretty much the same for hundreds of years. 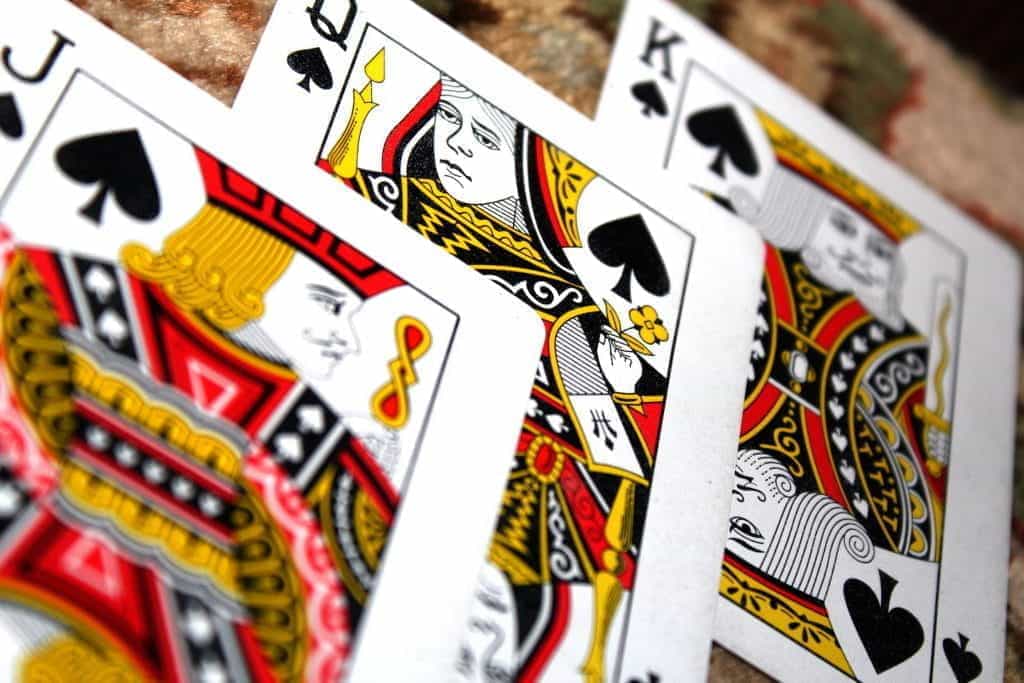 You’d be forgiven for thinking that the royals depicted on playing cards are fictional. That isn’t the case. The kings, queens and jacks are all based on famous figures from history and mythology. This is known as the Paris pattern. Here’s our guide to who’s who.

The King of Hearts is also known as the ‘Suicide King’. This is because he seems to be pushing a sword into his head. This is actually mistake based on hundreds of years of bad copying. The original Márechal card from 1567 clearly shows the King holding up and axe, which has been lost over time. He originally had a mustache, but that was lost too!

The ‘Queen of Hearts’ can be used as a phrase to describe a queen or person who is beloved by many people. That description doesn’t really apply to the most famous Queen of Hearts though. In Lewis Carroll’s ‘Alice in Wonderland’ her favorite catchphrase is ‘Off with their heads!’. Notorious for her furious temper, she was hardly a benevolent monarch!

The Jack of Spades and the Jack of Hearts are both known as one-eyed jacks. This is simply because they are illustrated in profile. The King of Diamonds is displayed in profile too, with just one eye on show. Jacks used to be known as knaves. When it became common practice to print the card’s value in its corner, there was a problem. The letter K already stood for ‘king’, so a different initial was needed for the knave. ‘Kn’ was sometimes used, but it led to confusion. Using a completely different term like ‘jack’ took a while to catch on, but added much-needed clarity.

Have you ever wondered what the symbols of the four suits represent? In fact, the diamonds, spades, clubs and hearts each hold particular meanings, relating to life in the Middle Ages. The diamonds symbolize the merchant class, the spades symbolize the military, the clubs symbolize agriculture and the hearts symbolize the Church. These four things were key institutions to medieval people, so it’s no wonder they cropped up in their card games! Others believe that the suits have another meaning – the four elements of nature. The hearts are water, the diamonds are earth, the clubs are fire and the spades are air.

The number of cards in a deck is also significant. There are 52 cards in a pack, just like there are 52 weeks in a year. The four suits symbolize the four seasons – winter, spring, summer and autumn. In each suit there are 13 cards. Each season has 13 weeks too. There are also two solstices per year, represented by two back suits and two red suits. What do you think – coincidence or not?

The Church vs. Card Games

Playing cards might have grown in popularity in Europe, but the Church was not happy about it. Gambling was a vice, which led to a ban on card games. In 15th century England, cards could only be played over the twelve days of Christmas. Since gambling became common practice, the Christian Church has always stood against it. In 1628 King Charles I of England granted that cards could be manufactured, provided they were taxed. The cost of playing cards rose sky high – to £16! A tax stamp had to be printed on the Ace of Spades, which annoyed many people. 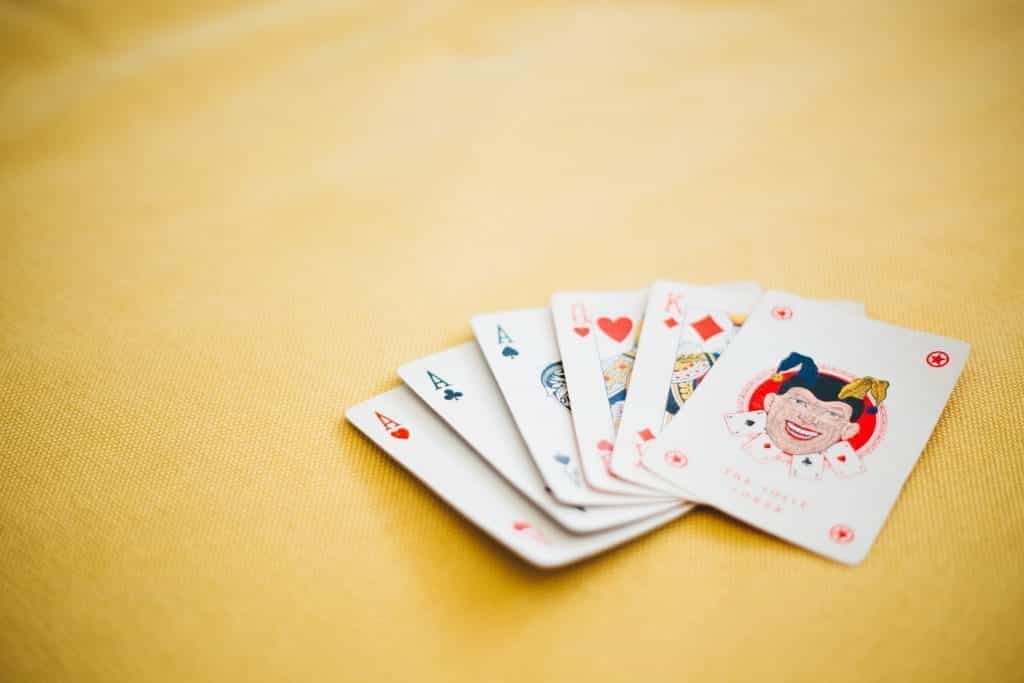 The joker is actually a relative latecomer to the modern card deck. It was invented in America for use in the game ‘euchre’. Euchre was invented in 1860 in Europe, but gained popularity in America after the War of Independence. The joker was created to serve as a top trump, also known as a best Bower. The joker began popping up in other card games after that, most frequently as a wild card. Most modern card decks include one or two jokers. Donato de Santis of Italy holds the World Record for having the largest collection of jokers – a whopping 8,520 in total!

Card games have always been popular with soldiers. They are cheap, portable and provide a great antidote to the stretches of boredom that accompany trench life. Special card decks have also been distributed to soldiers, in order to teach them important information for the war effort. Spotter cards in WW II replaced traditional imagery with planes. Soldiers could use these to help identify whether aircraft flying overhead belonged to allies or enemies.

Playing cards were also sent to American prisoners of war held in German camps. The United States Playing Card Company with the aid of the US government manufactured them. These were no ordinary cards though. By wetting the cards, a soldier could peel them apart to reveal a map to freedom. Genius!

The Ace of Spades

The Ace of Spades has a checkered history, coming to symbolize intimidation and foreboding events. Traditionally, Caribbean pirates used to show traitors this card to ‘put them on the spot’. The ‘spot’ is implied by the single pip on the card – just one ace in the center. This is where the idea of the ‘black spot’ comes from, as popularized by Robert Louis Stevenson in Treasure Island.

We said earlier that there has been a link between the spades symbol and the military since medieval times. During the Second World War the spades symbol was painted on the side of American parachutists’ helmets as a token of good luck. This wasn’t only based in superstition though. Other airborne divisions painted other suits on their helmets too. It was useful way of identifying troops, particularly during large-scale operations.

During the Vietnam War there was a myth that the spade symbolized death to the Vietnamese people. This probably wasn’t true, but that didn’t stop US soldiers from leaving the ace of spades as a calling card on the bodies of Viet Cong they had killed. Soldiers were so fond of doing this that ace of spade cards had to be shipped to Vietnam in bulk. They were transported in cases marked ‘Bicycle Secret Weapon’.

Get Your Cards Straight

There’s an important reason why most playing cards have rounded edges. Sharp square edges wear out quickly. This damage could sometimes reveal the indices – the card value in the corner. That would totally spoil the game, so we’re grateful for rounded edges! There is a similar reason for the designs on the back of the cards. Intricate and dense patterns help to hide wear and tear while making sure that the card is not too transparent. Otherwise, a player might be able to see through an opponent’s card and cheat!