Now, not everyone may be a fan of tattoos. As an ancient art form, it has been used by people across the world to display their passions and personality by permanently marking their skin for ages, and we think there’s some merit to it. There are all kinds of reasons people may want to ink themselves. Whether you are religious, and you want to show off a spiritual symbol, or if you are into cars and want to wear the Ferrari logo forever, sometimes we get tattoos for meaning and sometimes we get them simply because they look cool. The same goes for gamblers. Whether it’s for superstitious reasons or to show off something you’re good at, we’ve listed five great tattoo ideas that could be totally customized to show off your love with the game.

The practice of tattooing has been undertaken since early in our human history. Tattooing is essentially the process of purposefully marking the skin permanently, for spiritual, aesthetic or artistic reasons. The first tattoos were made from carbon and ash in the Neolithic era, and evidence suggests that these early humans used particular tools for tattooing. More amazingly, some archaeological research has even discovered evidence of tattoos on well preserved human skin in Ancient Egypt dated to 4,000 BC!

As generations went by and humans explored the globe, more materials and methods were found. Some of these methods, like henna or stick and poke tattooing, have recently had a resurgence in popularity – a testament to the beauty of the art form. The word tattoo was first used in European dialect as ‘tattow’ in the 18th century. The word stemmed from the Samoan word ‘tatu’, which translates to, ‘to strike.’ Before this particular word was used, Westerners tended to use phrases like ‘painting’, ‘scarring’ or ‘staining’ to describe the act of permanently inking one’s skin.

Not all tattoos were voluntary though. Coal miner’s of old were known to be able to have their skin stained permanently by coal dust, asphalt, or gunpowder that they were exposed to on a daily basis. You may even know a few people who have at one point stabbed themselves by accident with a pencil or pen and have permanently left a graphite or ink marking below the skin. They, for lack of a better phrase, tend to be called ‘traumatic’ tattoos.

In some cultures around the world, like Japan, and even in past decades of our own, tattoos have represented something dark and untrustworthy and were seen to only be worn by misfits and criminals. Now, even the meekest and mild personalities can be seen wearing them and no one will bat an eyelid. Our relationship to tattoos seems to have entered an entirely new phase, and while many believed that the tattoo-boom in the early 21st century was merely a trend, it seems as though the profession isn’t going anywhere anytime soon.

Of the thousands of amateur and professional tattoo artists around the world, the oldest is a Filipino woman by the name of Whang-ad Oggay. At the age of 101, she is a master of the traditional Kalinga tattooing style. As the last remaining ‘mambabatok’, her services don’t just involve inking but she also includes fortune-telling and chanting too. This ritualistic approach to tattooing is a call-back to ancient times when getting inked wasn’t just a skin-deep practice. She continues her legacy by teaching her craft to the next generations.

With this understanding of the history, customs and reasoning behind tattooing and getting tattooed, we hope that you can move into our next section with an open mind. Chances are, if you’re reading this you are a fan of gambling, so if you’re considering getting a gambling tattoo for any purpose, know that you’ll be taking part in a long tradition that spans thousands of years, styles and the entire globe.

Below, we have listed five different designs that we have chosen not just because of their aesthetics but because of the deeper layer of meaning they possess. Although you may disagree, we believe that tattoos tend to have a more special quality if, beyond their pleasing looks, they have a story or meaning behind them – no matter how deep or silly. In saying that, you may just find an image or a design that resonates with you on a deep level for a reason you can’t understand, and we believe that that is a story enough in itself. Either way, if you’re a gambler, then chances are you have some fascination in the mystery surrounding good fortune, bold decision-making or the thrill of risk, and what better place to experience that then in the tattoo chair. 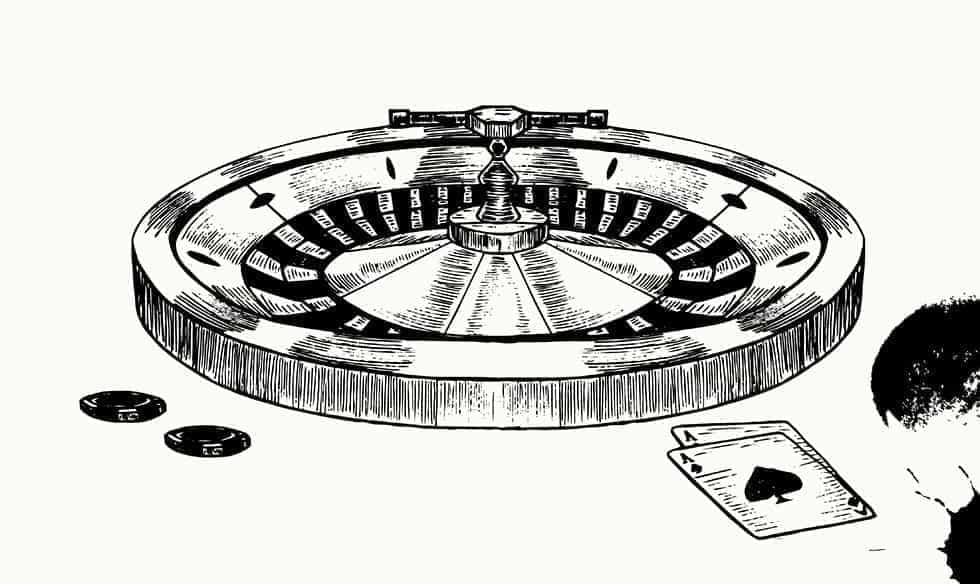 Despite many people never having been in a casino once in their life, there’s something about a gambling tattoo that is alluring enough for even non-players to get inked with casino-related images. This is fairly common with the roulette wheel tattoo. As the contrasting black and red colors checkered over a spinning wheel make for a bold aesthetic, some people get a roulette tattoo for looks alone. If you want to try out the game before getting it permanently represented on your body, check out the best roulette casinos to give the wheel a spin. Other people may be inspired by the image because of the game’s reliance on luck and chance, and feel that having such an evocative design will allude to good fortune within their own lives. It’s not uncommon for people to add other elements along with the wheel, including the “Welcome to Las Vegas” sign. 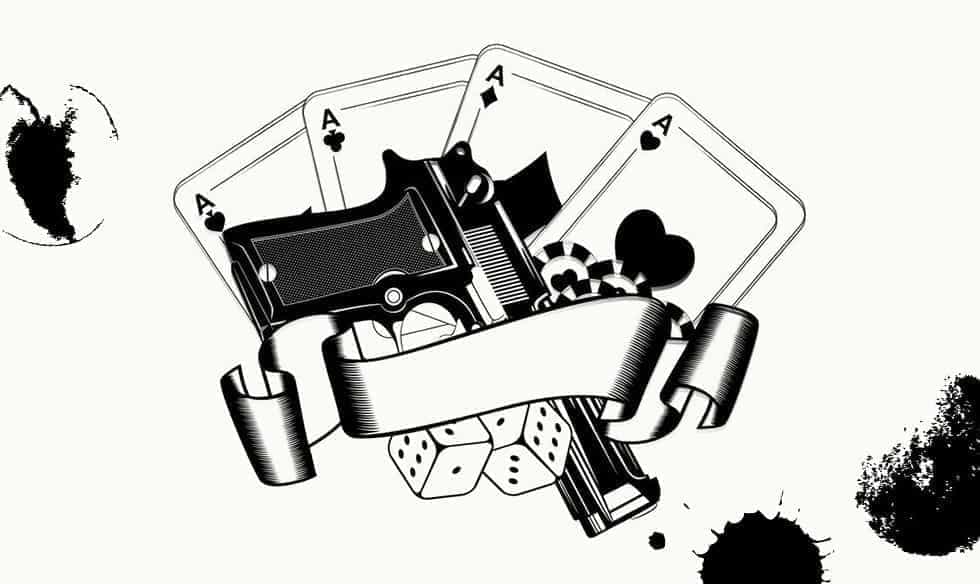 Whether it is playing blackjack online or automated baccarat, card games have been popular with people for hundreds of years. The deck of cards is a strong image when it comes to not only gambling but also magic. Its use in both activities gives it a mysterious quality, as a deck tends to symbolize a constant unknown. Whether people tattoo particular cards or whole decks, there are a whole lot of different reasons as to why people may relate to different aspects of a deck. Beyond the obvious uses of King or Queen inked on your skin, people may also be trying to celebrate their favorite casino games or choose to have a visual reminder about the random or elusive qualities to existence. Either way, the deck of cards tends to be a more classy and understated tattoo design. 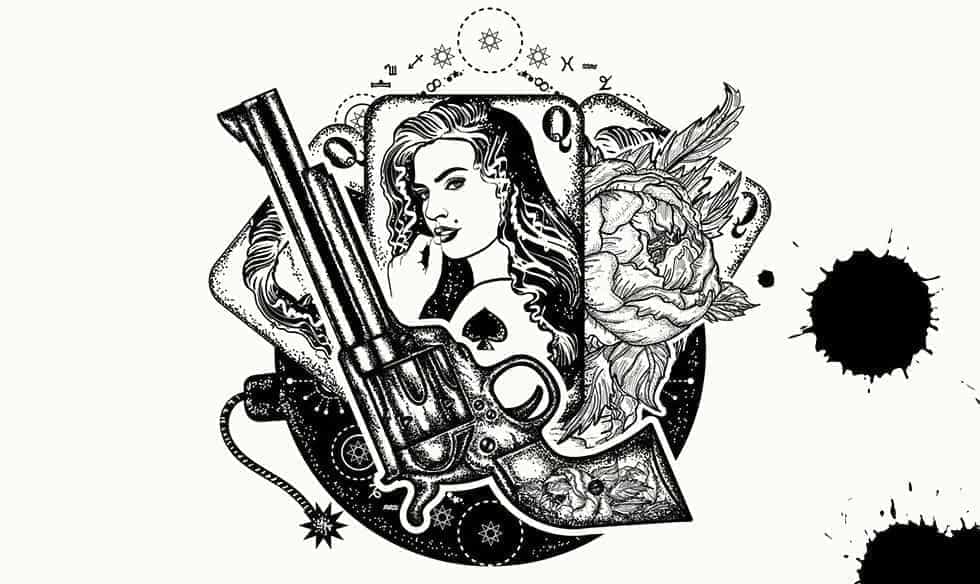 This tattoo tends to be favored by men, although getting marked with Lady Luck is not totally unheard of for women. Lady Luck, or the Goddess of Luck, may be depicted in many ways – from her depiction in more ancient mythical forms or in a modern, sexy version – but at the end of the day, it means the same thing. Usually, she is shown blindfolded to symbolize the completely directionless nature of chance and how it may deal in or hold back good fortune. Because Luck is an element outside of gambling, many non-gamblers will get this tattoo, but it may be more common for gamblers to specify their relationship with Lady Luck by including a pair of lucky dice or a Full House, depending on if they like to play craps or prefer to play hands of poker.

Long before the Suicide Squad depicted the villain joker as a heavily tattooed maniac, people were tattooing themselves with the iconic Joker card design. The Joker, or Jester, is a historically mischievous character that is known for his unpredictability and its wearing of the comical garb of a clown – belled hat and all. This is represented in gambling with the Joker being a Wild Card, which makes its value malleable to the players own wishes. In the same way, a gambler may want the Joker tattooed on him to show off his cheeky character when not playing, and if in full sight of his opponents, his unpredictability. 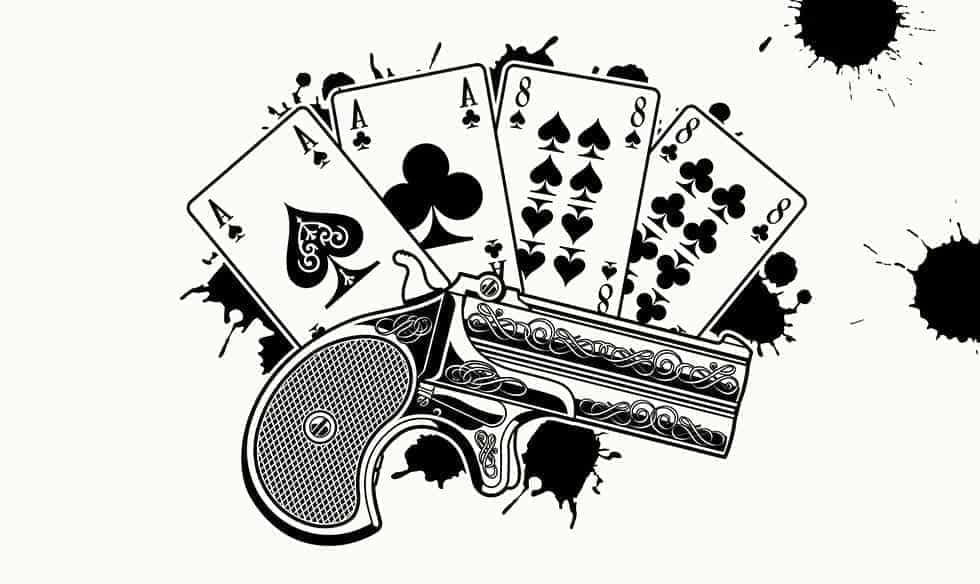 In what may be our most favorite gambling tattoo designs, the Dead Man’s Hand tends to always represent a deeper meaning that is generally only understood in the gambling world. The Dead Man’s Hand refers to a strong poker hand when a player holds two black aces and two black eights and a fifth card to complete the combo. The name and exact hand stem from the story of folk hero Wild Bill, whose lack of caution in covering his back while playing had him murdered. He was also holding this particular hand too. The Dead Man’s Hand symbolizes caution and wisdom in gambling, and even the Las Vegas Police Department use the cards in their insignia.