Paddy Power Betfair Could Change its Name to Flutter Entertainment

Global online sports betting and casino gambling conglomerate, Paddy Power Betfair, has released its annual financial report for the year 2018. The company has shared both highs and lows for the year, including closing a number of company acquisitions in various country markets. It also suggested a rebrand to stakeholders.

The company’s revenue rose by 7% from 2017, which brought the tally of funds up to $1.87 billion, however, the profit before tax figure wasn’t so positive: it was down 11% to 219 million from the 247 million accumulated in the financial year 2017. Earnings per share were also down, by 6% to 241.7p; though full-year dividend that is proposed at 200p per share is unchanged.

According to Paddy Power Betfair, the company has taken the leading online market share in the UK over the last year. Its online performance in revenue was up 6% on a global basis, which it aims to hold and improve in the future through evolving the Betfair brand to better utilise the combination of sportsbook and casino, as well as invest in ‘customer propositions’, such as new promotions and adding more product and value to its offering.

Some of its suggested improvements to its Paddy Power brand in the UK include developing a new sports app that is ‘faster and simpler’, as well as expanding its loyalty programme to improve customer retention. It also aims to better localise its products to expand the number of languages and services it offers, as well as increase the number of payment methods.

I’m really pleased with the way that the group performed in 2018 in what was a challenging year for the sector with regulatory and tax changes. Our collection of challenger brands are well positioned in their local markets. Paddy Power has regained its mojo, taking share following product improvements and some of our ‘classic’ marketing.– Peter Jackson, Paddy Power Betfair CEO

The suggested name change from Paddy Power Betfair, which was introduced with the merger of the two major gambling businesses, to Flutter Entertainment, is up for shareholder approval. The vote will be held to confirm whether the name changes or not.

According to the Financial Report, the rebrand aims to offer a corporate name that ‘better reflects the increasing diversity of the Group’, which means that it will no longer purely be associated in the market with the two businesses that currently form its name; Paddy Power and Betfair. This is a move to help with the smooth expansion of the company into a global market, as the names which are well-known in the UK Ireland and Australia are not necessarily so in the US or other emerging markets into which the company aims to move.

The financial report described the company’s acquisitions that took place over the year and its attempts at globalising the business. In June, the company acquired US-based daily fantasy sports and sports betting operator, FanDuel, and made deals to offer the services to certain casinos in New Jersey and West Virginia, as well as several other states with pending sports betting legalisation. It also acquired a controlling stake in Georgian firm, Adjarabet, in early 2019.

Jackson said, “Betfair, our unique combination of product that appeals to customers around the world, will be improved by our ongoing investments in languages and localisation. In Australia, recent tax changes favour the largest operators and we are determined to maintain our leadership position amongst the online bookies, using Sportsbet’s leading customer proposition and generosity to continue to take market share.

“The opening of the US online sports betting market has the potential to be the most significant development to occur within the sector since the advent of online betting. Rather than announcing our plans, we have moved quickly to give ourselves the best chance to win in that market. We are confident that FanDuel’s nationally recognised sports brand, 8m customers, our group betting expertise, and our market access partnerships position us very well. Our success to date supports this view, with FanDuel achieving a 35 per cent online market share in New Jersey in its first five months of operation, and Meadowlands becoming a marquee venue for sports betting.” 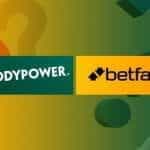