Reading-based software developer, Realistic Games, announced the launch of its most recent slot game, Shuffle Bots, the company’s ninth game release of the year so far.

The game combines nostalgic disco-themed decor and styling with futuristic robot characters. The cast includes the Cocktail Bot, who randomly appears at sporadic intervals, transforming an also random number of symbols into wilds. The bot also provides some entertainment, bringing out some classic 70s dance moves.

The slot game features five reels and three rows, with 20 paylines that pay from left-to-right as is standard for video slots. The symbols in the game include the traditional numbers and Jack, Queen, King, but also a shiny disco ball and a range of robot characters. The main game boasts features such as a Random Wilds bonus and Bonus Scatters.

The highlight of the game is sure to be the feature which can be activated by matching a series of three Feature symbols. During this round, the robots will also “get in the groove”, making it as much a visual feature as it is a bonus game.

While playing through the feature, it is possible to trigger a new bonus round, meaning that it is theoretically possible to enjoy multiple rounds consecutively.

Robert Lee, the Commercial Director of Realistic Games, said that the company is “thrilled to be unveiling Shuffle Bots as the latest addition to our portfolio”. He explained that “the game has been developed using our new Games Machine technology which allows us to create exciting new features that can be used in future concepts.”

As is the case with all new Realistic Games releases, the game was created using HTML5 technology, meaning that it is fully compatible for play on all-devices. The game is playable through internet browsers, without the need of downloadable programs or plug-ins. The game will be rolled out across a large number of casinos that carry titles from the developer. 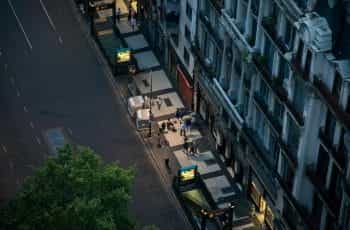