New legislation has been introduced to help Atlantic City casinos due to the continuing financial burden on the gambling industry due to the coronavirus. The aid will provide a reduction in tax liabilities on gross gaming revenues and the suspension of fees for casinos and resorts in the New Jersey gambling hub.

New legislation seeking to grant tax relief to New Jersey’s casinos has passed the Senate, as lawmakers continue to debate when to reopen the flailing industry. ©Bruce Emmerling/Pixabay

The piece of legislation, which was introduced by Senate President Stephen Sweeney, passed on Monday night with a win of 28-4 votes. Sweeney has long stated that Atlantic City casinos are overdue to open after being declared closed on March 16th by Governor Phil Murphy.

Murphy declared that all nonessential businesses would shut after the outbreak of COVID-19 in the state of New Jersey. Nine casinos were closed as part of this decision, collectively putting 26,450 employees in the sector out of work.

The reduction of tax liabilities on GGR will qualify through the decrease of promotional and gaming credits to customers. Costly gaming and resort fees will be suspended for 2021, including the annual slot machine license fee of $500, and fees for hotel rooms and parking spaces that are occupied per day.

Casinos are currently taxed 9.25 percent on GGR. The new legislation would cut taxes to zero percent for 24 months once they reopen. Rates could fluctuate between each casino, as the measures are conditional on how much is earned compared with winnings in the same month last year.

Although the bill passed by a clear majority, there was some resistance to the bill. Aside from the four who voted against, eight more senators involved in the vote chose to abstain. Senator Richard Codey, who abstained, believed that the legislation would harm the economy even further.

Proponents argue that the casino industry is essential to the economy and is therefore worthy of the grant and deductions. This is upheld by Senator Michael Testa, who points out that casinos have been subject to higher taxes over the last 30 years so cuts are fair.

Senate President Sweeney has also been active in voting for other legislation to help the case, such as the A4031/S2398 legislation seeking to grant casinos interest-free loans. Second to this, Sweeney supports S2479, a bill looking to enforce stricter sanitation procedures for local hotels.

Governor Murphy believes that reopening casinos and gaming venues will be part of the final component of the plan to reopen. This is despite many previously banned activities such as outdoor dining now being allowed. Regardless, Murphy has warned that the coronavirus is still a threat.

“Our economic restart must instill confidence among our residents and visitors that their safety, and that of their families, is our number one priority. I encourage all New Jerseyans to continue their vigilance in keeping themselves and their communities safe by social distancing, wearing face coverings, washing hands frequently, and limiting gatherings.”– Phil Murphy, Governor, New Jersey in an official press release

Sweeney, on the other hand, believes that if the right public safety guidelines are in place then the casinos should reopen. He cites that proper procedures should be enough to prevent another outbreak, and points out that the state has already been successful in flattening the curve of infections.

Governor Murphy disagrees, believing that casinos are difficult to open because of their poor ventilation and the close proximity of guests and workers. It is likely that the gaming floors won’t open until July, though Murphy has reiterated that his administration is working tirelessly to reopen the casinos.

Murphy hopes to reopen casinos before July 4 as this is typically an important and busy date for casinos. In 2019, the New Jersey Division of Gaming Enforcement reported that Atlantic City casinos gained a gross gaming revenue of more than $277 million during the month of July.

Details for the operating procedures of reopened casinos are still being defined. A spokesperson for the Attorney General’s Office said the state and unions have been working on a plan that ensures safety for both guests and staff. Once finalized, the plan will be submitted to the Governor’s Office for review.

Many other casinos in other jurisdictions have already reopened their doors, providing some indication for what to expect. This would likely mean a 50 percent cap on the capacity for hotels and gaming, the use of plexiglass between dealers and players, enforced social distancing, and temperature screenings.

New Jersey’s safety measures are likely to be more severe due to the Northeast region having a high number of coronavirus cases. State guidelines will set the precedent for all casinos and businesses, however individual operators will need to work to ensure that the safety measures meet their own needs.

Many casinos in Atlantic City are excited and prepared to reopen after nearly three months. The Hard Rock Hotel & Casino Atlantic City are among many others that have said that they are confident that they can provide a safe, comfortable, and fun space for their visitors.

It’s no secret that gambling is an integral component of New Jersey’s state funding. For the time being online gambling businesses have aided the loss of wealth. Online casino revenues are continuing to flourish in this time whilst casinos are closed. 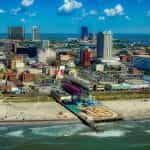