After shifting to a series of online conferences in 2020, Latin America’s leading gambling industry convention will return to IRL events on February 24. The event is slated to take place at the Hipódromo Argentino de Palermo racetrack in Buenos Aires, Argentina. The show could be, as officials from SAGSE suggest, the Latin American gambling industry’s only IRL industry event of the year. But is that a good thing?

The event, sponsored by Play’n GO, will take place in Buenos Aires on February 24. ©DMDiseño/Pixabay

A short time later, SAGSE announced that it would be transitioning its content to a series of curated online panels called SAGSE Talks. During these virtual conferences, various industry leaders would come together to discuss or listen to discussions about significant issues in the Latin American gambling market.

Latin America’s Gambling Conventions Have Had To Be Creative

SAGSE wasn’t the only major gambling industry event recalibrating to handle the uncertainty of the ongoing pandemic. Another important Latin American gambling event, known as the GAT Expo, which takes place in Colombia, elected to take the unusual route of developing an entirely virtual event, complete with a 3D rendering of an expo hall.

For both SAGSE and the GAT Expo, however, the duration of 2020 was a series of false stops and starts. Both events declared a number of different possible dates for postponements, suggesting an in-person event could be on the horizon. By the end of 2020, plans became more realistic and concrete.

By the beginning of 2021, both the GAT Expo and SAGSE had publicly stated what they planned to offer for the new year. With a vaccine for the coronavirus being distributed in countries around the world, it remains difficult to predict when life can proceed unimpeded by the novel respiratory virus, though many hope this will be before year’s end.

In December 2020, the organizers for the GAT Expo publicly stated a number of events to expect for the coming year, indicating a fusion approach to online and in-person events. The in-person events would be closely capped at a certain number of people, emphasizing a sort of private viewing model.

At the time, SAGSE officials were less clear about what, exactly, they had in store for the next year. In late January, officials from Monografie — the company responsible for planning SAGSE — announced that the convention would be hosting its very first, and perhaps only, in-person event of 2021, set to take place on February 24.

The much-awaited in-person event will take place at Argentina’s Hipódromo Argentino de Palermo, located in Buenos Aires, Argentina. Officials from Monografie were ebullient about the announcement, suggesting that this might be the only in-person event of 2021 not just from SAGSE or even in Argentina, but from any gambling company worldwide.

The event will begin at 7pm on the evening of February 24, and will feature an exciting evening complete with a live DJ set by Mariano Legui, as well as live dancers, a nighttime show, several prize draws, an open bar, catering, and a Beatles cover band. In between, guests will have the exclusive opportunity to network and create important connections.

According to organizers from the event, the February 24 in-person function will be highly exclusive, offering a socially distanced and COVID-safe way for Very Important People in the local gambling industry to have an intimate, “living room” style event, offering the ability for industry members to network safely.

Sponsored By A Leading Gambling Brand

Much remains up in the air about 2021, which is leaving event planners — like those at Monografie, who are responsible for the annual SAGSE events — uncertain about what the future holds. In late December, the first supplies of the much-anticipated COVID-19 vaccine arrived in Mexico, Chile, and Costa Rica, offering some hope.

In Argentina, officials have planned to lean on the newly-released Russian vaccine, known as Sputnik V. As of January 26, Argentina’s Vice President, Cristina Fernández de Kirchner, had received the vaccine, which is shown to be 90% effective against COVID-19. As of mid-January, the country approved residents over the age of 60 to receive the Sputnik V shot.

Could This Be The Only IRL Event Of The Year?

The question remains: are Monografie officials right to estimate that this February 24 event will be the only IRL event in 2021? Many in the United States are optimistic about vaccine rollout, suggesting that widely-attended in-person events will happen before year’s end. But can the same be said in Argentina? We’ll have to wait and see. 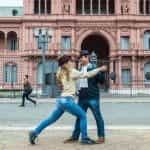