The Grosvenor UK Poker Tour’s main event in Coventry saw more than 6,000 players compete, putting it firmly on the map as one of the biggest poker tournaments in the world. The event was won by amateur Elliot Marais, who turned his £120 buy-in into £85,760.

The event held at the Ricoh Arena ran between July 27th to August 6th and included a prize pool of almost £700,000. Briton Marais fended off competition from a whole host of pros to claim by far his biggest victory to date. The small stakes player from Scunthorpe had previously won £1,111 throughout his career, with a maximum single haul of £215.

Marais only needed to buy in once and had a relatively smooth route through to the final table of nine players, where he began in third place. With four players left he was still in third position, but he managed to double up by going all-in with AKs versus A6s. Later, he had great fortune to turn J9 into a straight after the flop revealed a 10, before the turn and the river presented a 7 and 8. 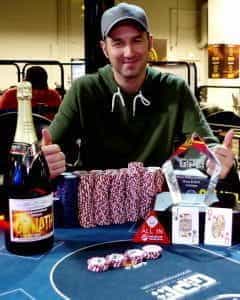 Elliot Marais after his victory. ©GUKPT

He defeated accomplished pro, and tournament favourite Tai Hoang into second place along the way, once again proving that non-professionals can generate big wins on a global scale. Hoang picked up £62,060 for his efforts. Meanwhile, Levan Reid finished third to collect £44,630.

Describing the experience as “fun”, Marais will hope to be competing next year at the event run by Grosvenor Casinos, where he will no longer be an unknown quantity. Interestingly, Marais used to play at Napoleon’s Casino in Hull – the same venue as John Hesp, the Bridport grandad who finished fourth in the WSOP Main Event in July.

Despite the £120 buy-in, this year’s event saw an increase of over 1,000 participants on the 2016 edition. With 6,385 players, it is only 35 shy of the 2015 WSOP Main Event, and an improvement on last year’s total entries of 5,232. The total value of the payouts was an increase of over 20% on last year, and the Goliath event is now well-established as Europe’s biggest poker event, and the largest tournament outside Las Vegas.

The WSOP Main Event, which concluded in Las Vegas in July, also had a bumper year, with 7,221 entrants taking part in the $10,000 buy-in tournament, which was won by American Scott Blumstein. 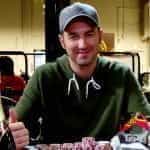