Smith claimed the first prize of $1,404,000 (£1,045,84) ahead of “Kid Poker” Daniel Negreanu in one of the final preliminary events before the start of the World Poker Tour Five Diamond World Poker Classic Main Event on Tuesday. 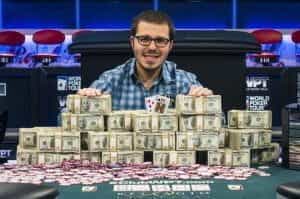 Thirty-nine of the best poker players in the world stumped up the $100k buy-in fee knowing that only six people would be walking away with a prize. Smith’s win was his third biggest career cash and it takes his total winnings to over $19 million, becoming his third win at an event with an $100k buy-in.

Negreanu kept everyone who couldn’t attend the event on the edge of their seats with updates on his Twitter feed.

Smith won that hand to take 3.2 million chips into the heads-up play against Negreanu, who was on 2.6 million. Negreanu was eliminated after going all-in on a J-T-4 flop with Q-10, while Smith’s A-K beat him out when a queen hit the river, giving Smith the Broadway straight.

It became the 22nd final table finish of the year for Kenney, who has won five titles and $8,128,628 in the process. Kenney consolidated his place as the current leader in the 2017 Card Player of the Year race, while Smith moved into 12th place, having won three previous tournaments this year along with 13 final table finishes.

All eyes now turn to Tuesday’s WPT Five Diamond Main Event, which attracted 791 entries last year. The $10,000 buy-in event is the last WPT event of the 2017 calendar year and should be hotly contested with a similar number of entries expected. Last year’s winner James Romero walked away with a mammoth $1.9 million. 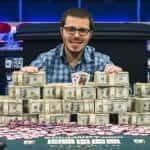