The Californian’s 134th WSOP cash pushes him five bracelets ahead of the competition as three the closest challengers behind have just ten bracelets each.

Phil Hellmuth, 53, of Palo Alto, California, has won a record-breaking 15th gold bracelet at the World Series of Poker. The win came in event #71: $5,000 No-Limit Hold’em of the 2018 tournament in Las Vegas and earned him $485,082. Doyle Brunson, Johnny Chan and Phil Ivey are his closest competition on the WSOP lifetime bracelet standings. 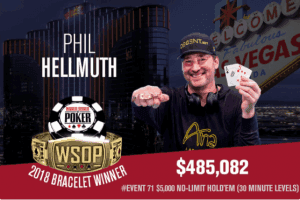 Second place in the event went to Steven Wolansky, who holds three WSOP bracelets, and third place was won by Alan Sternberg. Hellmuth spoke of Wolansky as a worthy rival: “He wouldn’t give an inch. I knew he wouldn’t give an inch… I had to start thinking, ‘Alright, how do I want to handle this?’ I’m going to have to steal more pots against him to give myself a chance, because he’s just not giving a chip away, he’s making it really tough and I can’t blink first, either.”

Hellmuth managed to break another record after he won his 134th winning hand in a WSOP tournament. He has won well over $14,000,000 at the WSOP throughout the years. The poker player earned the nickname the “Poker Brat” after showcasing his bad temper at the table on many occasions and became the youngest ever WSOP Main event champion in 1989, aged 24. This is one record Hellmuth no longer holds with the title currently belonging to Joe Cada, the 21-year-old, 2009 tournament winner.

Phil Hellmuth, also a New York Times Bestselling Author, has written many books about poker, the most recent was #POSITIVITY – a well-reviewed guide to success. The poker champion is also the only person to ever win both the WSOP main event and the World Series of Poker Europe main event after his 2012 win in Cannes.

The UK’s own three-time WSOP champion Benny Glaser, 29, holds three bracelets and has made it to the final table of the tournament five times. In the current tournament, Glaser has competed in several events, even placing 5th in event #33: $50,000 Poker Players Championship. The $50,000 buy-in for the event was made up for with $260,578 in winnings. 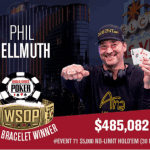