The film marks a directorial debut for Sorkin – known for A Few Good Men as well as recent hits such as The Social Network, Moneyball and the Steve Jobs biopic. His first foray into directing follows the true story of a strong-willed female poker player unfairly treated and underestimated because of her gender. The movie covers her incredible story spanning the ages of 20 to 32.

Molly Bloom, a talented skier in her youth, who narrowly missed out on the US Olympic skiing team, began working as a personal assistant to a man who ran underground poker games after moving from Colorado to California. She ended up becoming part of the scene herself, attracting wealthy celebrities to play in weekly games.

In 2013, Bloom pleaded guilty to police charges of running illegal high-stakes poker games for Hollywood stars and Wall Street millionaires. She was sentenced to a year of probation and fined $1,000. She was arrested in the middle of the night by 17 FBI agents carrying automatic weapons, such is the depth of her connection to a dark underworld, including members of the Russian mob.

The film has received a somewhat lukewarm response since its screening at the Toronto Film festival last week, with critics claiming Sorkin’s poor track-record of writing for female characters has not been answered with his latest effort.

As a director, Sorkin is competent but uneven. He attempts a few gimmicky flourishes (a video game-esque display of the cards being held in a poker game and some other pointless on-screen graphics), but otherwise, it’s a plainly told tale matched with a hopelessly dated rock score. – Benjamin Lee, reporting for The Guardian

The movie also stars Idris Elba as Bloom’s lawyer, whilst Kevin Costner plays her therapist father with whom she had a difficult relationship with when she was a child.

The film is scheduled for release in UK cinemas on 26th December 2017. 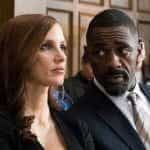