The star poker pro from Sweden netted the main prize of €850,000 in a tense finale at the biggest poker arena in Europe, the King’s Casino in Rozvadov, Czech Republic. 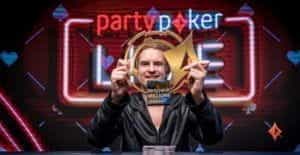 Thirteen out of the 1,022 participants eventually made it to the final table, and 27-year-old Blom provided the drama at the last with a hero-call in the final hand, overcoming a nine-to-one chip disadvantage heads-up.

The Swede, who is no stranger to long, grinding high-stakes games online, lifted the trophy after a final stint of 14 hours, culminating in a showdown with Moldovan Pavel Plesuv.

Heads-up play began in disastrous fashion for Blom as his triple queens were fended off by a straight for Plesuv. A successful call by Plesuv gave him an 875 million to 139 million chip lead.

Blom managed to gradually claw back the huge deficit until it finally came down to one hand. A queen-nine-king flop gave Blom a pair of kings, while Plesuv had a pair of queens, leaving both players feeling reasonably confident about their chances. The turn produced an ace of diamonds leaving Plesuv needing a diamond on the river for a flush, but the final card was a five of hearts.

Plesuv attempted to bluff and went all in, leaving Blom a tough decision. He agonised on whether to call for a while, before taking the plunge and emerging victorious from a thrilling final showdown that will be remembered for some time.

After becoming the two last remaining players at the table, the pair agreed a deal to guarantee the loser an additional £168,000 on top of the £673,000 runners-up prize.

Briton Rickie Silcock finished in third place after being eliminated by Plesuv.

The MILLIONS poker tour heads next to Barcelona for the Grand Final series in April, featuring a mammoth guaranteed prize pool of €23m. 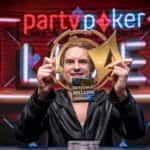