A government scheme aimed at preventing problem gamblers from using fixed-odds betting terminals (FOBTs) has been criticised after an undercover reporter discovered that betting shops are still allowing addicts to gamble.

The reporter, who was posing as a problem gambler, was allowed to use FOBTs at 19 out of 21 betting shops. The undercover BBC journalist, Rob Cave, should have been ejected from all shops when attempting to use the terminals.

The scheme is designed to protect addicted gamblers who can sign up to be self-excluded from betting shops near where they live, work, and socialise. Cave set out to test the effectiveness of the scheme by self-excluding himself before attempting to enter shops to place bets.

The investigation took place in Grimsby, Lincolnshire. The town has one of the highest concentrations of high street bookmakers in the country. The operators of the exclusion scheme, The Senet Group, called the investigation a “bit of a wake-up call”.

It begs the question – is a piece of paper with a name and a photograph on it, enough of a solution to help those who want to stop gambling when the fun stops? Rob Cave, BBC Reporter, Five Live Investigates

The self-exclusion system was introduced in 2016 following an industry consultation. It aims to strengthen social responsibility, but the UK Gambling Commission (UKGC) is now concerned. Sarah Gardner, executive director of the UKGC, said: “We are determined to drive improvements in behaviour across the industry in terms of the effort they put into reducing gambling-related harm and it really is getting to the stage where there is nowhere to hide. What we would like to see is much more emphasis from gambling businesses on intervening at an early stage.” 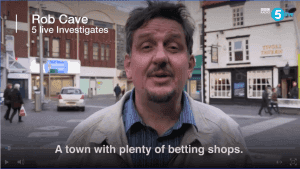 Reporter Rob Cave, on the streets of Grimsby, for BBC Five Live Investigates.

In a statement, The Association of Bookmakers said: “We accept that the current self-exclusion scheme is not without flaws however we are continually developing improved systems. This is a disappointing result. However, it was conducted in artificial circumstances, involving a small sample, over a short period of time and the individual concerned was not a problem gambler or previously known to shop staff.

“By its very nature, those who self-exclude are normally known to the staff in the shops they exclude from.”

FOBTs generate £1.8bn in revenue for bookmakers per year. A government review into the terminals was launched but later scrapped by Chancellor of the Exchequer, Phillip Hammond, to preserve tax revenues. Calls to reduce the maximum bet from £100 to just £2 remain strong. There are 33,611 FOBTs in the UK today.

It is not the first time gambling operators have been accused of failing to protect vulnerable customers. In August 2017, 888 Holdings was fined a record £7.8 million for a technical failure which allowed individuals who had self-excluded themselves to access their accounts and place bets.

The report was filmed for Five Live Investigates, and first aired on Sunday 17th December 2017. 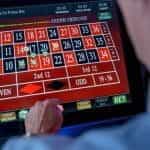 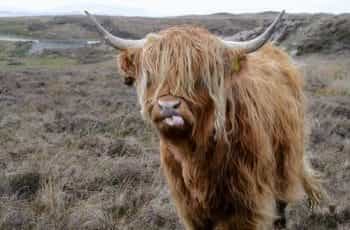 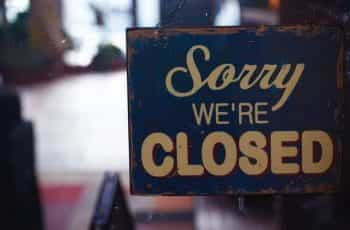