What an explosive start it has been to the Rugby World Cup in Japan. With major upsets, highly adverse weather conditions, swelteringly humid stadium and sweeping changes to the tackling laws drastically remolding the landscape of international Rugby Union. 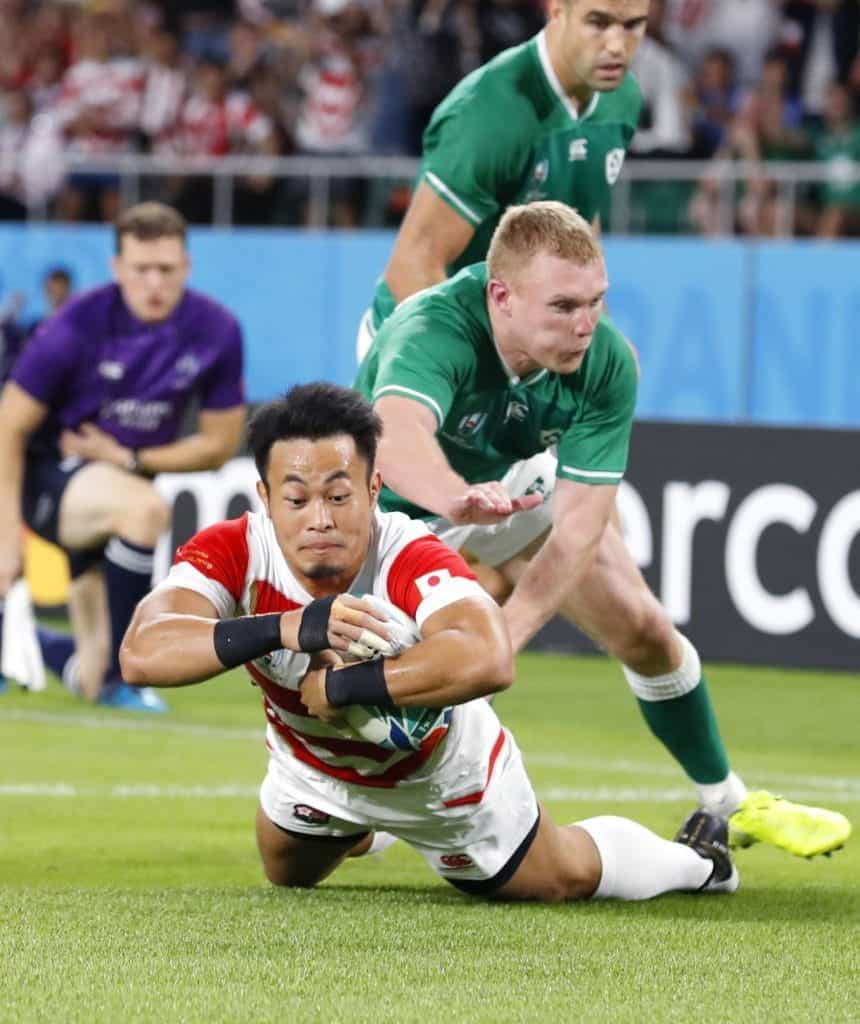 The tournament hasn’t even reached the knockout stages and yet there is so much to unpack. Throughout the following sections, we’ll analyze the major talking points, offer some in-depth analysis on the upcoming matches and have a look back over the best moments so far of the 2019 Rugby World Cup.

Is This Rugby World Cup Going to be Remembered for the Right Reasons?

This has by no means been a conventional Rugby World Cup tournament. Yes, the spectacle that the Japanese have managed to provide so far has been exceptional. Being the first time the tournament has been hosted in Asia, it has been a brilliant moment for the sport on its conquest to expand into this part of the world. But will this Rugby World Cup be tarnished by the red-card controversies and tornado induced logistical chaos?

It’s hard to find negatives in such a momentous occasion of the sport, but before we get into the heart-pounding episodes on the pitch, we need to discuss some friction points regarding the conduct of the tournament so far.

We are currently at 7 red cards so far in the tournament. That is the most cards ever delivered in a world cup competition, and we’re not even into the knockout stages yet. With recent amendments to the tackling law meaning tacklers must go into contact low and avoid contact with the opponents head, or face a straight red card, many have been caught out and find it difficult to adjust. The cancellations of two group game matches also have been a hugely disappointing repercussion following dangerous weather conditions. With many feeling like this tournament could have been better prepared for the tornado and have contingency plans in place for relocating matches instead of outright canceling them. If more matches are canceled several countries including Scotland have threatened legal action against the organizers which would be totally unprecedented in Rugby World Cup history.

Major Upsets in the Opening Round of Matches

Now that we have cleared through the major gripes with this World Cup, we can discuss the thrilling nature of some of the amazing upsets of the Rugby World Cup so far. As we all know rugby is a game that can become incredibly one-sided once the tide begins turning. The difference in skill level between the top-teams and those on a lower tier can be very obvious. This World Cup has seen three particular matches thus far that have defied all expectations and proved why rugby is one of the most thrilling sports around. Below we’ll recap on the most shocking results of the tournament so far.

Japan opened the tournament comfortably defeating Russia and then carried on the form beating Ireland in what can only be described as a seismic result for the tournament. Going into the World Cup, Ireland was ranked world number one and had the weight of the world on their shoulders. This was an epic game by all accounts. Ireland started the game quickly and took the lead with some skillful backline play and final-third kick execution. But the tenacity and determination of the Japanese shone through in the second half of the game and Japan took the lead. The lead was almost extended in the final seconds as Japanese a back-line player broke through the Irish defense and ran the entire length of the field before being brought down 5 meters out. When the ref blew the final whistle the entire emotion of the victory came out as the players embraced one another and the stadium exploded from the cheers of adoring Japanese fans.

One of the Rugby World Cup best moments so far is, without doubt, the shocking victory of Uruguay over Fiji. The island of Fiji has a long and deep tradition with rugby, compared against Uruguay where the sport is rarely played by the country with just 3.5 million inhabitants. This was truly a mammoth victory for the small South-American country. They proved themselves to be resilient and strong across the field, and when push came to shove they were able to execute in the danger zones and overturn the ball and key instances in the match. This game had a truly epic ending, at 30-27 and 82mins on the clock, Fiji hit the post and missed from a penalty kick, denying them the draw and giving Uruguay Rugby the greatest victory ever in their history.

We knew that defending Fijians would take two players so that meant we had to multiply our effort. That was the key for defending. I think 90 per cent of the victory was tactics and that last five minutes we had to dig inside of us to find that passion.Juan Gaminara, Uruguay Rugby Captain

The Welsh got their campaign off to a flying start in an epic battle against Australia. The game opened with a drop goal scored by Wales putting the 3-0 ahead in the first minute of the game. From minute one Wales seemed to be comfortably in control of this game and they pushed on with 10 minutes to play, denying Australia the chance to fight back and get anything out of the game. This goes down as a massive upset simply given the strength and power of this Australia team. Many had tipped them as potential World Cup winners going into this tournament, but given this shock defeat to Wales, the betting odds have begun swaying in favor New Zealand and England.

Many Epic Tries and Unexpected Victories

Without harping on too much about the epic victory of Uruguay too much, we felt the try scored by Santiago Arata deserves to go down as the best try of the tournament so far. Picking up the ball on the halfway line, the number 9 quickly sidestepped 2 Fijian defenders and accelerated into past a third whilst beating away a fourth player with a handoff. The tournament has been full of skillful moments such as these, and all countries involved in the competition have done themselves justice in attack and defense. With the law forcing players to go lower to avoid breaking new safety regulations in tackles, we’ve seen some huge hits by players such as Manu Tualagi. With the competition heating up and reaching the crucial knockout stages, we can only expect this intensity to continue and improve.