Iowa and Indiana have brought in $38.5 million and $35.2 million from sports wagering respectively after their first full month of legal sports betting. By the start of September, each state had begun accepting bets on sports events after they both passed legalization bills earlier this year.

Bettors place their wagers on the current football season at a sportsbook in Altoona, Iowa ©Des Moines Register

Both states are similar in that their neighbor states have yet to legalize sports betting, allowing both to profit from interstate visitors hoping to cash-in on the football season.

According to the Iowa Racing and Gaming Commission, the 15 of Iowa’s 18 licensed casinos who are permitted to accept sports bets brought in net revenue of almost $5 million. With the state receiving 6.75% in tax revenue on the casinos’ net receipts, a total of $334,553 was added to state coffers.

Meanwhile, the Indiana Gaming Commission has stated that the 10 sportsbooks open across the state produced gross revenues of around $8.6 million. Indiana claimed over $800,000 in tax revenue based on the 9.5% tax rate placed on sports bets.

It’s expected that these figures will rise once wider spread online mobile wagering is expanded across the states. In Iowa, over 56% of the wagered bets were made through the internet. The Prairie Meadows casino was the highest earner, with $14.5 million of the state’s sports wagering total raised through the venue. Of this, a staggering 89.2% was raised through mobile betting.

The second-busiest casino, the Ameristar in Council Bluffs, brought in only $3.79 million. Mobile wagering has yet to be launched at the site.

When considering population sizes, it could be argued that Iowa far-outperformed Indiana. Indiana’s population is more than double that of Iowa’s, making their $35.2 pale in comparison to Iowa’s $38.5 million. This edge is expected to be short-lived though, as Indiana’s online market was only launched this month.

A Draw for Neighbor States

It is believed that both states will benefit from the lack of legal sports betting available for residents in neighboring states and large metropolitan areas. Indiana, for example, has its three largest sportsbooks located right on the border of those areas.

The Horseshoe Casino in Hammond, Indiana, is located two miles from the state’s border with Illinois. Despite not opening until September 4, it managed to take in $9 million dollars in bets. This amounted to roughly a quarter of the entire market.

Iowa’s performance is expected to have had a considerable boost thanks to its proximity to Nebraska and Minnesota, two states who are yet to legalize sports betting.

Despite the possibility of remote gambling for interstate visitors, there are a number of measures to prevent illegal remote gambling in place. For one, Iowa’s laws require that all prospective bettors must physically enter an Iowa casino to place their first bet or to register for the casino’s mobile app.

Online sports betting apps adopt geofencing technology in order to restrict the location where bets are placed. Bettors will also need to provide identification information when creating their online account, which may include customers’ physical address and social security numbers. 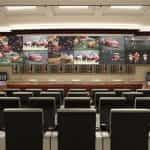