This online slot is the third Monty Python title to be released and the second that has been developed by Playtech, while it can also lay claim to being the best one to date. Offering five-reels and 30 paylines to players, Monty Python and the Holy Grail combines irreverent humour with outstanding graphics to create a brilliant gaming experience. 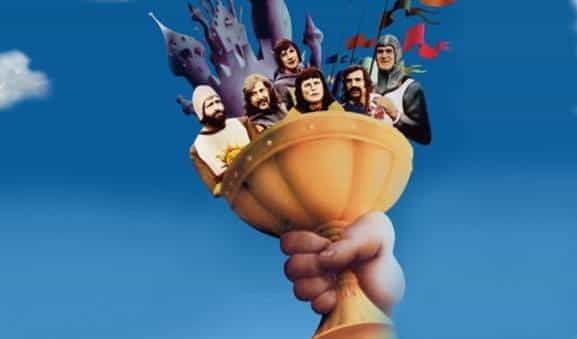 This is the Playtech mantra, of course, with this game having borrowed heavily from the classic (and not to mention controversial) Monty Python film from the 1970s. The authentic soundtrack only adds to the experience, as does Playtech’s innovative gameplay and increasingly creative bonus features.

Try Monty Python and the Holy Grail for Free

There is an immense amount of charm to be found in Monty Python and the Holy Grail’s cartoon graphics, as a host of colourful symbols spin relentlessly against the backdrop of a sun-kissed battlefield. They do not have tremendous visual appeal, but they also capture the true essence of a ground-breaking film that retains a cult following to this day. 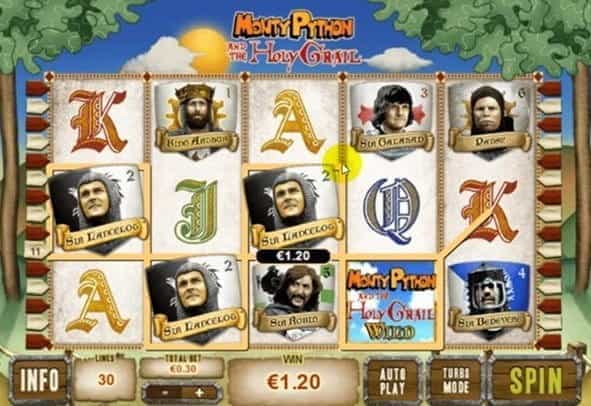 The themed and unusual nature of this online slot (and indeed any Playtech game) can provide challenges for new players as they look to get to grips with the game. Our practice mode can help with this, as it enables you to try the game for free before you play Monty Python and the Holy Grail for real money. You can even reload your money as often as you like, so those pesky Monty Python characters don’t distract you from the task of winning money!

In many ways, Monty Python and the Holy Grail can be considered as a mid to high-variance game, with a diverse betting range and coin denominations between 0.30 and 750. This affords you plenty of choice when setting your line bet at the bottom of the screen, although it is fair to assume that this online slot will appeal most to high-rollers and more experienced players.

In terms of learning how to play Monty Python and the Holy Grail, you should first familiarise yourself with the symbols. As usual, Medieval style Jacks, Queens, Kings and Aces represents the lowest-value icons in the game, while six of the slot’s main characters (namely Patsy, Sir Robin, Sir Bedevere, Sir Galahad, Sir Lancelot and the iconic King Arthur) depict the higher-value alternatives. The latter symbol is also the most lucrative, paying out 1000 coins if you land five across a winning payline.

The game also has a wild which is depicted by the Holy Grail symbol, and this can appear anywhere across the five reels. Landing three, four or five of these will earn you 150, 600 and 5000 coins respectively, while the wild can also substitute for any symbol other than the scatter icons.

This takes the form of a Coat of Arms shield, although it is important to note that the scatter can only be found on reels 1,3 and 5. When you land three of these simultaneously, you will trigger the grandiose Quest of Camelot Free Games feature, which will ask you to select one from three of the unique gameplay modes that are available. These are represented by one of the three shields, each of which comes with a fixed number of free spins and several potential modifiers.

The first game mode is the Castle of the Britons, in which the breaking of win can add wilds to the reels. Crashing cows from a French Catapult can also bring additional wilds to the party, while a Trojan Rabbit can also roll across the reels to create stacked wilds. In the Forest of Bravery mode, ‘brave’ Sir Robin flees over the hills adding wild stacks to the reels, while the Knights who say ‘Ni’ utter forbidden words to turn random symbols into Holy Grail wilds. Then we have the Three-Headed Knight, who instantly creates four wild icons whenever he appears!

The third mode is known as the Cave of Caerbannog, which introduces a killer rabbit, the Black Beast of Arrrgh and an extremely explosive gameplay element that can deliver locked and sticky wilds. This is perhaps the most rewarding mode of all, with payouts in excess of 620x your stake available! If you like this title, check out our guide to the best UK slots online.

Play Monty Python and the Holy Grail for Real Money

One of the most creative and thrilling slots available, there are enough floating wilds and immersive game modes to keep even the most hardened player engaged. There are also relatively large base game wins on offer, some of which can soar to 230x your original stake.

So whether you are a die-hard Monty Python fan or not, this Playtech game boasts more than enough to compel you to play for real money. You can easily transition from the practice mode to our favourite, recommended casino too, qualifying for an exclusive welcome bonus that can be applied to all slot titles in the process!

The game’s return-to-player (RTP) rate is fixed at 93.99%, which is more than respectable given the slot’s mid to high-variance nature! Another movie-themed game that doesn’t take itself too seriously is Foxin Wins.

Monty Python and Other Slots

I’ve got a an additional Monty Python slot in store for you, linked below. On top of that, I’ve thrown in some personal favourites of mine, ranging from silly to straight up hilarious. Take a look at the accompanying slot reviews to find all the details of the gameplay, and/or test out the games yourself with the free play demo provided in each review.