Its time to take yet another virtual trip to the Middle East, courtesy of Blueprint Gaming and its immersive slot title Genie Jackpots. Read on for detailed information about gameplay, rules, special features, and RTP, or cut straight to the chase and play a free trial to get the full experience. 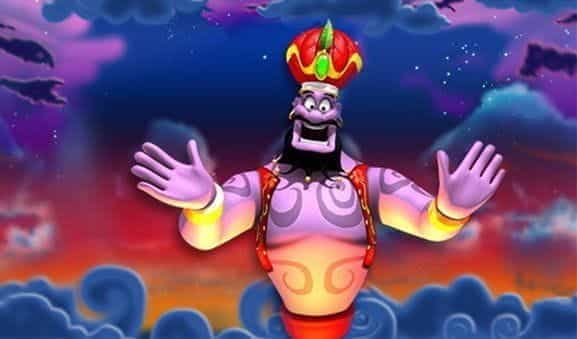 A five-reel slot game with 20 fixed paylines, Genie Jackpots is a colourful title with a consistent theme and a number of intriguing bonus features. There is also the alluring carrot of a progressive jackpot, which could deliver a life-changing sum of money to those who are fortunate enough to trigger the feature!

The games’ purple and silver-rimmed reels sit serenely inside an ornate structure, which is suspended high above the clouds against a backdrop of an orange, purple and fiery red evening sky. In fact, the visuals put you in the mindset of a magic carpet ride, which in our experience is never a bad thing. 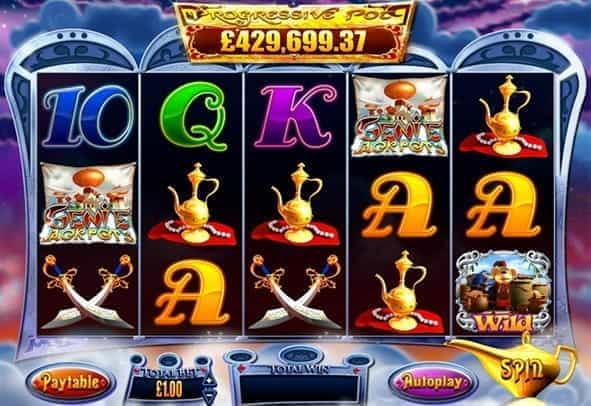 Before you rub the lantern and release the genie, however, you may want to try the game for free through the practice mode above. This will afford you access to a full simulation of this online slot, in which you can reload your money as many times as you like in a bid to learn the fundamental elements of the game.

Genie Jackpots is a mid to high-variance slot game, with coin denominations of between 0.20 and 200 available. The fantasy theme of the game will probably not distract you from the fact that there is a base game jackpot of 500x your stake, either, so this is something to look out for once you set the reels in motion.

When you learn how to play Genie Jackpots, you will note that the lowest value symbols are depicted by playing card icons including 10s, Jacks, Queens, Kings and Aces. The game also has three high-value symbols that are linked directly to the theme, namely crossed scimitars, the genie’s turban and the iconic magic lamp!

The game also has a wild symbol, which is depicted by a performing monkey, and this can replace others to forge winning combos. There is also a bonus icon too, which activates the various features that exist within and outside of the base game!

The biggest and most lucrative of these is the Three Wishes Power Spin, which can be triggered randomly during any spin. You will be alerted to this when three magic lamps appear above the reels, and rubbing one of these will reveal a reward. These include the addition of Genie wilds and re-spins, which turn any position wild and allows you a single re-spin. You can also access an upgraded version of this bonus with all pays doubled feature, which introduces a 2x multiplier to proceedings.

Look out for Infectious Monkey wilds too, which sees playful icons added to reels and quickly creates matching symbols. As if this was not enough, there is also a chance to earn a random shot at the Progressive Jackpot Award and win a potentially huge cash reward!

There are other bonus awards too, which can be triggered either during the Three Wishes Power Spin or through two additional methods. You can land three of the aforementioned bonus symbols on reels one and three (along with the magic carpet icon on reel five), at which point you will be required to pick magic carpets from those that are on show to shift a playful monkey along. Finding ‘collect’ ends the round, but landing ‘big money’ delivers a large cash prize.

If you land the two bonus symbols with the treasure chest on reel five, you will be awarded a random prize as the chest opens. This could even reward you with a multiplier of 100x your total bet, so it is well worth keeping your eyes peeled for. If you like Genie-based slot games, you should check out the Millionaire Genie slot game.

There is no doubt that this game is good fun, packed with an exciting theme, tremendous graphics and a host of bonus features in the base game. There is an impressive progressive jackpot on offer, which can be won randomly at any time during the game.

Choosing to play Genie Jackpots for real money certainly helps you to get the most from this game, and you can do this easily by signing up to our recommended casino here. You will even be rewarded with an exclusive welcome bonus, which you can use on this online slot or any of the titles in the library.

This slot also has a deceptively high return-to-player (RTP) rate of 96.53%, thanks primarily to the frequency with which the base game bonus features are triggered. If you are keen to chase massive jackpots, also have a look at Jackpot Giant.

There might as well be 1001 similarly-themed slots out there, if anyone ever sat down to count them. One thing is for sure though – you won’t run short on inspiration. Especially with the following game tips – handpicked from my pool of jackpot slots and/or games that draw inspiration from other continents. Read the reviews or jump straight into free play mode – the choice is your.