Evolution Gaming has announced that it will open a new live gaming studio in Atlantic City, New Jersey by the end of the year.

The new studio will initially add 10 new tables to the roster of games provided by the gaming giant. It is set to open by the end of Q3 2018 and will serve a number of different operators around the world.

The tables will include Live American Roulette, Blackjack, Baccarat, Three Card Poker, Ultimate Texas Hold’em, and Slingshot Auto Roulette. Evolution stated that the new studio will also aim to expand in the future.

Chief Executive of Evolution Gaming, Martin Carlesund, explained that “more games and tables will then be released gradually, including dedicated tables for specific operators.”

The feature game of the studio will be the Dual Play Roulette ‘convergence’ table. This will allow for players to play in person at the table while being joined by online players elsewhere in the casino, and other online players from anywhere in the state of New Jersey.

Evolution announced the expansion after signing an agreement with the Ocean Resort Casino Atlantic City, allowing them to set up the studio. The Casino is a landmark in the city, occupying the tallest building in Atlantic City. The 20-acre site is located directly on the iconic boardwalk.

Frank Leone, CEO of the Ocean Rest Casino, said that “Adding Evolution’s world-class Live Casino to our service for both on-property and remote players is another key ingredient in making Ocean Resort Casino a standout destination.”

The expansion comes amid steadily growing revenue and share prices for Evolution. In the first half of 2018, its operating revenues were up by 35%, reaching €110. After the news was released, the share price of the company soared more than 10%.

The Stockholm-based company is already at the forefront of live casino online gaming and does not appear to be slowing down at all.

I can state that we are continuing to deliver on our ongoing mission to continuously extend the gap between us and our competitors– Martin Carlesund, Chief Executive, Evolution Gaming 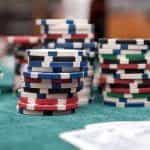