After less than a year at the helm of the Scientific Games subsidiary, CEO Matt Davey is stepping down. Davey is set to be replaced by the current senior vice president for corporate development, Jordan Levin. The changeover is due to come into effect by the end of the year.

These globally-respected leaders and longtime members of our SG family are the best people to continue our growth trajectory, deliver operational excellence and inspire our employees. Pat will leverage his in-depth Lottery experience and proven success at Scientific Games to provide strong operational leadership and innovation.– Barry Cottle, CEO, Scientific Games

Cottle explained that McHugh “will work with Jim to continue to execute our global growth strategies. For SG Digital, Jordan’s digital experience will prove immensely valuable, as he formally takes over our rapidly accelerating digital gaming and sports betting businesses”.

2018 has proven to be a year of ups and downs for Scientific Games. January saw the developer acquire the NYX Gaming Group for a sum of $579 million. This acquisition saw then-NYX CEO, Davey, rise to the position of SG Digital CEO in February. But it hasn’t all been good news. In August charges were filed against Scientific in a highly publicized antitrust suit, which the developer only settled this month. 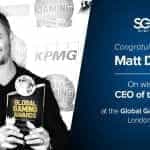