Fire up the engine, put on your jet-propelled space suit and venture out into the unknown with the help of IGT’s colourful slot Apollo Rising and watch the rockets and meteors shoot by as you spin for astronomically high rewards! Our brief review of the game will tell you all you need to know about the rules and features, followed by tips on how to play for free and where to go for a real money experience. 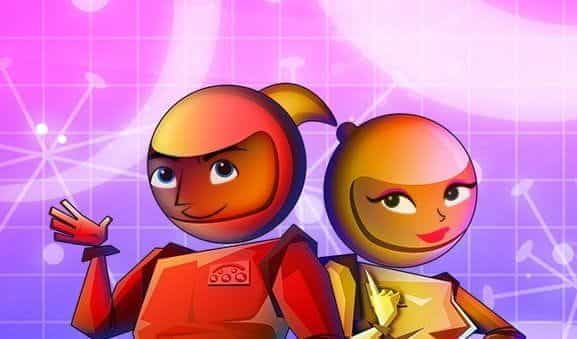 This game’s 100-payline setup is what sets it apart from the majority, where a more conservative 20-50 line approach tends to be prevalent. The grid is also much taller than the norm, allowing for some interesting special features. Read on to play a round or two after the jump!

Play Apollo Rising for Free and Test the Reels

As tends to be the norm on many online gambling sites, slots in practice version are available for those who’d like to try the games before they commit by depositing any money at an online casino. We’ve already prepared a trial version of this slot for you right here – just start playing, get a feel for the game, and get familiar with all the rules and extras. Your play balance can be topped up anytime, so you can take as long as you want in getting to know the reels. 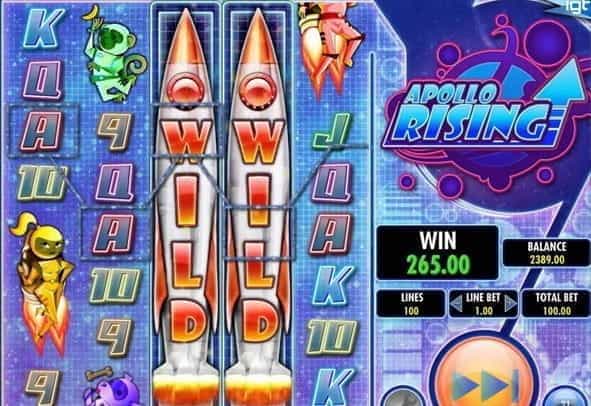 Immerse yourself in the futuristic vision that permeates this game as you spin for free – you might recognise the Jetsons-inspired look of the reels from mid-century visions of space exploration. The supersonic utopia includes not only humans, but also pets – as you will see on the reels that feature not only a male and female ‘astronaut’ but also a monkey and a dog! The colour on and around the reels are vibrant and the graphics are smooth – which is a huge plus with a reels of this size. The ultra-modern, modular dashboard is placed next to the reels for a change, and the accompanying sound effects and music go along with the theme perfectly.

How to Spin in Space

The play grid has a whopping 100 paylines distributed onto 5 reels and 7 rows. The paylines are fixed and pay out left to right, but you can control the size of the line bet/coin value with the toggle in the middle of the dashboard. The highest paying icons in Apollo Rising are the male and female astronaut, awarding 300 and 200, respectively, followed by the monkey and the dog with 150 and 100. Considering the size of the reels, however, we were surprised to see so few special icons. Pretty much the only one is the Wild symbol, which substitutes all other icons to form a winning line.

Not to discount the Wild symbol, we have to acknowledge its great functionality – the symbol expands to cover the entirety of reels 2, 3 or 5, increasing your chances to score more winning lines with the tall rocket ship Wild. This special symbol also triggers the Rising Respins Feature: the expanded reels stay put, and you get awarded the same number of free spins as the number of symbols that triggered it (in short, one expanded Wild – one respin, etc.). Better yet, if you manage to get another expanded Wild respin during ongoing free game, the special reel becomes fixed as well, further increasing your wins. We have to say we were thoroughly impressed with this feature – despite the lack of other specials, it has the potential to secure you some amazing payouts if you’re lucky!

Where to Play Apollo Rising for Real Money

We hope you’ve enjoyed getting to know Apollo Rising, and now that you know its fantastic payout possibilities, you should consider spinning for real money in order to hopefully get actual rewards out of it! You can do so at our recommended online casino, where you will find this and many other thrilling slots in real money mode. Click on the link to find out what welcome bonus you qualify for as a new player – free or no deposit bonuses might be in store for those who register to join the site, so check out the details and complete the sign up process to claim!

This slot has a slightly varied return to player rate, moving in the range of 92.56% to 96.33% – presumably due to the explosive nature of the expanding Wild features that may range from regular to amazingly rewarding. Do note, however, that this rate is theoretical and is based on extended play period.

If you enjoyed this intergalactic futurism bonanza, there are similar slots on my list that might pique your interest. Why not peruse the long list of adventure-themed slot games or reels with a remarkably shrill yet enjoyable neon-theme? Here are some of my alternatives if you like your reels colourful and your game features out of this world. These and many others can be found in my recommended casino sites.