When you consider the growing army of DC superheroes, it stands to reason that some should fall by the wayside. Take the Green Lantern, for example, who despite one of the brands’ oldest creations (having debuted back in 1940) has fallen behind the likes of Batman and Superman. 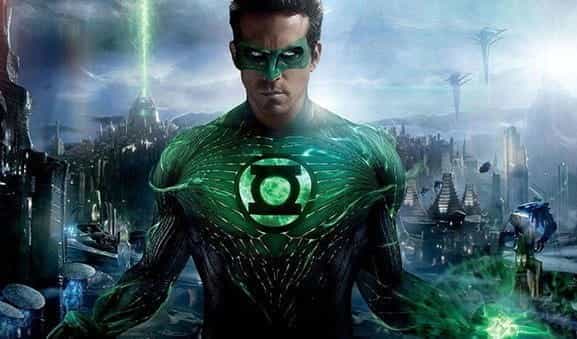 Until now, that is, as Playtech’s five-reel, 243 payline slot has dragged the Green Lantern kicking and screaming into the digital age. Now, this ring-brandishing icon has been released on a global stage, equipped with tremendous graphics, superb features and even a progressive jackpot.

The first thing you will notice about the game is the towering Green Lantern himself, who stands to left of the reels while occasionally performing heroic feats. To his right sit the five futuristic reels, which shimmer in a sleek silver shade and sit against the backdrop of an atmospheric, green-tinged planet as it floats through space. 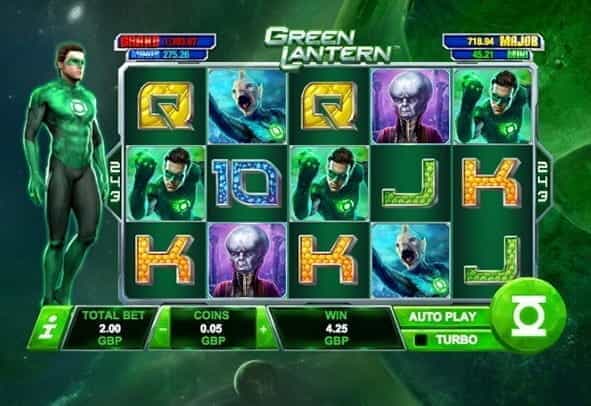 To avoid becoming lost in space as the reels continue to spin, we would recommend that you try the game for free through the Practice Mode featured above. This enables you to master the complexities of the game, while it is also possible to reload your money as often required to become a successful player.

The game starts once you have selected your stake in the bottom left corner of the screen, and the Green Lantern offers quite a wide betting range to players. Coin denominations are available between 0.20 and 2000, which makes for a mid to high-variance game that can deliver large-scale wins and a potential, base game jackpot of 500x your original stake.

As with most Playtech games, the lowest-value symbols are represented by nines, 10s, Jacks, Queens, Kings and Aces playing cards, while the higher value icons include popular characters such as Sinestro, Hector Hammond and Green Lantern himself.

The infamous green ring symbol also serves as a wild, while this appears on reels two, three and four. This can substitute for all other icons to forge unexpected winning combinations, so keep your eyes peeled for dashes of green as the game progresses.

When you learn how to play Green Lantern, you will quickly notice that there is no standard scatter symbol or tradition bonus round. The online slot does utilise the popular collapsing reels feature, however, which means that every single winning combination quickly disappears and its replaced by more symbols cascading from above. This allows you to form a host of new combinations, each of which lights up the power bar located in the bottom right hand corner of the screen. If you reach the fourth segment of this bar, you will randomly trigger a bonus prize!

This also lets you access a number of innovative bonus rounds, including the Fear Flight Mission feature. This initially rewards you with unlimited free spins as wild symbols gather at the bottom of each reel, and the round ends once you have collected five, six or eight icons. Next up is the Training Centre Mission, which awards 10 free spins while introducing additional wilds to the reels.

Finally, we have the Secret Sector Mission, which will also deliver 10 free spins that come with an incremental multiplier. This will increase with each successive reel collapse, while triggering more segments and potentially higher multipliers.

This would probably be enough for most players, but Playtech love to give a little more to its loyal patrons. As a result of this there is also a Progressive Jackpot available through this slot, which can be won on any spin (although your chances of success increase with a higher line bet). If you are fortunate enough to compete for this prize, you will be required to select from a separate grid that includes four colours, representing the Grand, Major, Minor and Mini prize metres respectively! Another highly recommended online slot game worth checking out is Pharaoh’s Fortune. You can play Pharoah online here.

If there was a checklist for the archetypal, modern day slot game, Playtech’s Green Lantern would tick off most of the requirements. With its immersive theme, outstanding graphics (and animations) and the perennially popular collapsing reels feature, it is certainly an onlineslot that has sustainable and universal appeal.

If you do decide to play for real money, now may be the ideal time to register for an account with our choice of top online casino. By completing a few, simple sign-up steps, you will instantly become eligible for an exclusive welcome bonus while also gaining access to a huge library of slot games.

The Green Lantern slot also has a return-to-player (RTP) rate of 95.94%, which provides the cherry on the icing of a high-variance, superhero-shaped cake!

Get in on the Action with these Superhero Slots

Ever since Disney’s absorption of Marvel Studios, there’s been a notable absence of any slots associated with the Marvel brand – and understandably so. Still, though, DC Comics as well as other TV and movie studios continue to expand their brands into other niches. This is why you can still enjoy a number of branded superhero slots, from the most modern iterations to the older version from the 80s, as well as slots based on popular TV shows and movies. Below are a few examples of some alternatives you might want to try out.