Jack and the Beanstalk

Enjoy a beautifully animated take on the classic fairytale, Jack and the Beanstalk, It’ll come as no surprise to fans of NetEnt, this slot has a cinematic introduction video recalling the story of young jack escaping the ill-tempered giant in the sky, to return safely home with his golden swag! Enjoy playing for fun in our demo version or play this slot for real money at our casino top pick. 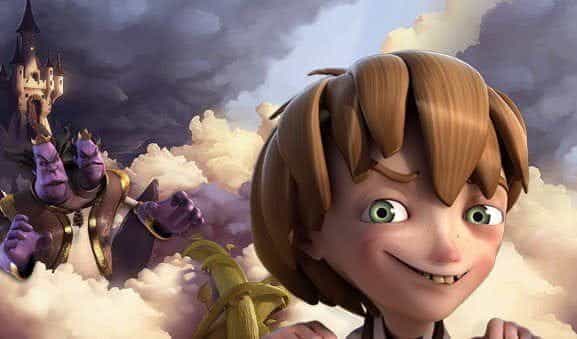 Jack and the Beanstalk Developer: NetEnt
A £200 BONUS IS AVAILABLE
Play Jack and the Beanstalk for real money and get a welcome bonus at NetBet!
NetBet
Rated: 4/5
Play the Slot Online Here!
Full T&Cs apply. New players, £10+ deposit required. No e-wallets/prepaid cards. 30x Playthrough on Bonus and 50x on Free Spins winnings.

This video slot is more than just child’s play! There’s a 600,000-coin jackpot to win as well as the amazing Shifting Wild feature, the games Wild jumps from reel to reel offering free spins as it moves across the reels giving more chance for rewards, what’s more wild wins multiplied by 3! The fun doesn’t stop there! Collect enough silver keys to be rewarded handsomely, with stacked money bags, golden hens and the sought after golden harp wild.

Play Jack and the Beanstalk for Free

No doubt we’ve convinced you enough that this slot is worth checking out and it’s pretty likely that you’ll want to experience Jack’s cinematic reels for yourself. That’s precisely why we’ve provided a fully featured demo version of Jack and the Beanstalk which you can enjoy for free, what’s more in free play mode you’ve got unlimited refills to try out all the features before playing for real money. 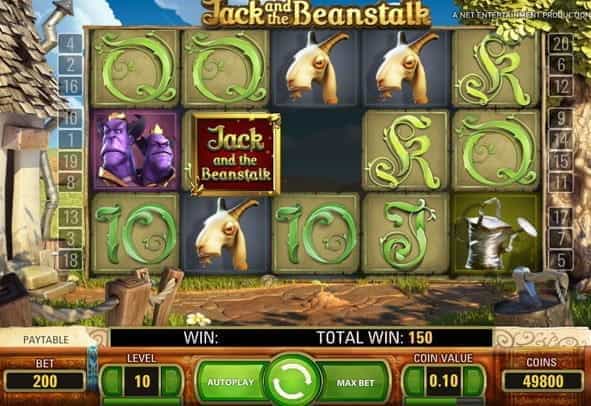 As the legend goes, a young boy called Jack sold his cow for some magic beans, little did he know these beans would cause a giant bean stalk to grow, climbing this Jack finds himself in an unknown land and curiosity gets them better of him. Trespassing in the castle of an unfriendly giant jack steals gold coins and sneaks back down to safety, he returns up the beanstalk but is caught stealing the goose and golden harp rouses the sleeping giant. Jack beckons his mother to cut down the beanstalk to stop him, their plan is successful as he falls to his death and the pair live rich, happily ever after!

Seeking the Giants Riches? Then Learn How to Play!

Slots players will be familiar with this 5-reel slot with 20 fixed paylines. High paying symbols are of course jack himself, paying out a top prize of 1,000 when 5 of his cheeky face land on a spin, next up are the purple beasts paying a maximum of 750 followed by the goat and axe rewarding up to 250 each.

Keep your eyes peeled for the treasure collection, these are the key symbols which appear on reels 5 during the Free Spins feature. These special keys unlock one of three Wild features. Collecting 3 keys will turn the next wild to appear into a stacked wild, with 2 money bag symbols. Once you’ve collected 6 Keys the next wild to appear on the reels will become 3 stacked golden hen Wild symbols! Last but not least are the expanding golden harps, collect 9 keys to see the prized expanding wild on the reels.

You’re probably wondering how to get your hands on some free spins? Look no further than the treasure chest scatter symbol. When 3 or more are spun, 10 free spins are triggered. If you’re lucky enough to hit 3 more Scatters during Free Spins, you’ll be rewarded another 5.

Walking Wilds are what makes this game truly stand out! When a Jack and the Beanstalk Wild appears on any of the reels, a re-spin is gifted, during the re-spin the Wild becomes dynamic, moving across the reels, one reel to the left with another re-spin as it moves each position, this continues until it reaches the left most reel. All Wild wins pay out a x3 multiplier, and to add to the fun, walking wilds feature in both the base game and free spins round.

Jack and the Beanstalk for Real Money

Now that you’ve played through the demo version and become familiar with the rules, you’re no doubt thinking about playing for real. Experiencing this game in a real money casino is the only way to fully appreciated the thrill of the jackpots and bonuses on offer. We recommend this casino because of their welcome package, if you’re new to the site simply sign up and make a deposit to receive a bonus which you can use on most slot games.

Each casino game has a return to player percentage. This delightful game follows suit, having a recommend RTP of 96.30%. This figure is purely theoretical but serves as a good guide to the amount it pays back when played over an extended period of time.

Other 3D Reels or Slots Based on Famous Tales

Software providers these days don’t shy away from pulling out all the stops to impress players. You’ll see 3D animation something of a standard in many online casinos these days, especially when you look at newcomers like Thunderkick or Yggdrasil. MIx that with the inclination to take inspiration from stories, movies and music, and you’ve got a solid list of slot alternatives to Jack and the Beanstalk. Browse the games below if you’re in search for new reels to spin.