Sometimes, a slot game needs nothing more than a bright and compelling theme. There are few more engaging than the late, great Jimi Hendrix, whose innovative music and incredible natural talent defined the Flower Power generation of the 1970s. 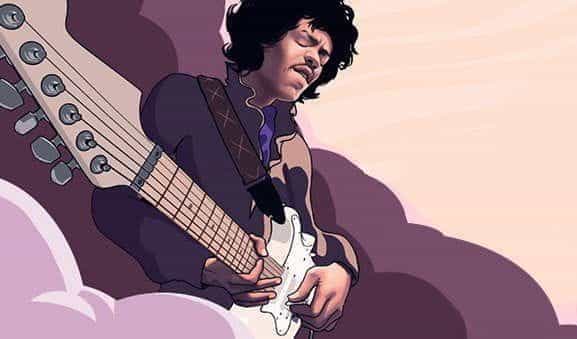 This five-reel, 20-payline online slot certainly leverages its Hendrix theme to great effect, by deploying carefree, cartoon visuals and a legendary soundtrack that includes classic hits such as Purple Haze and Foxy Lady. There are also a number of tremendous bonus features too, along with several high value multipliers.

This game has a clear, psychedelic vibe, and that delivers simplistic but quirky graphics that have a defined cartoon quality. This matches the fun and carefree nature of the game, as does the stunning desert backdrop that frames the colourful reel design. 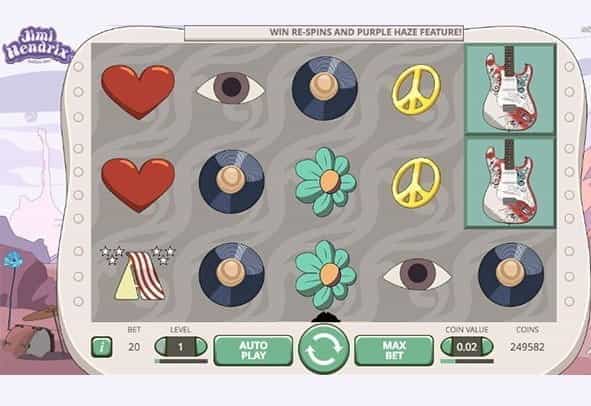 Given the psychedelic visuals and the sheer range of bonus features that are available through the game, it makes sense that you should try it for free before risking your hard-earned cash. You can do this through the Practice Mode above, which allows you access to a full (but simulated) version of the game and the opportunity to reload your money as many times as you like throughout.

Jimi Hendrix is a low to mid-variance online slot game, with available coin denominations between 0.20 and 200. There makes for a more than adequate betting range, while a maximum base game jackpot of 400x your original stake is quite impressive for a title that delivers a high frequency of wins.

As you would expect from such an interesting game, learning how to play requires you to get to grips with several cartoon symbols. These include base, low value icons such as 10s, Jacks, Queens, Kings and Aces, along with higher value alternatives like the white guitar, the peace logo, a heart, a vinyl disc, a flower and an eye. This is quite an eclectic selection of symbols, so there is plenty to get used to as you start playing the game.

Then there is Jimi himself, who serves as the wild symbol and can substitute for all others apart from the game’s myriad of scatters (more on these below). As a result of this, the sight of Jimi’s face enables you to forge unexpected winning combinations throughout the base game!

There are four scatters in total, each of which triggers a unique bonus round. These include the Jimi / White Guitar symbols, and landing three of these anywhere on reels three, four or five will take you to a different screen where you are required to find three matching symbols that unlock one of four alternative features. These include a Coin Win that delivers a multiplier of between eight and 30x your stake, and the Crosstown Traffic Free Spins round that rewards players with six complimentary turns on completely wild reels!

There is also a Purple Haze Free Spins round, where six to 12 free spins are awarded with the playing cards acting as wilds. Finally, you can unlock the Little Wing Free Spins bonus game, which delivers a further six to 12 complimentary turns with three, four or five reels added to the reels.

The Purple Haze symbol represents yet another scatter, which unlocks the bonus feature of the same name. To achieve this, you need to land the icon anywhere on reel one, and this quickly becomes wild along with the playing cards before your total payout is calculated. The final scatter symbol is depicted by the Red Guitar, and landing four of these anywhere in view will trigger the re-spin bonus of the same name. These guitars remain in place for one re-spin, while the round will continue for as long as they continue to land until a bottom line payout is determined.

While some may say that the Jimi Hendrix slot has a basic visual design, its cartoon graphics and psychedelic quality actually enhance the overall gameplay experience. When aligned with a diverse range of bonus features and a healthy base game jackpot, you have a clear and compelling case to play Jimi Hendrix for real money. If you want a more flashy game, take a look at the libraries of the UK’s best slots casinos. Each of the top sites will have hundreds of the industry’s best games to offer.

This is particularly true if you have honed your skills through our Practice Mode, so why not sign up to my favourite real money casino today? This will afford you access to Jimi Hendrix and other enthralling online slots, while also rewarding you with an exclusive welcome bonus that delivers crucial free gameplay.

On a final note, the slot also boasts a return-to-player (RTP) rate of 96.90%, which guarantees frequent wins during the bonus game and regular access to the slots’ bonus features.

Keep the vibe going and spin up some wins in the meantime! I’ve compiled some resources for you in case you’d like to get to know some similar slot titles. These come from various software providers and showcase a variety of funky graphics, sounds, and gameplay.