Released in August 2019 by Red Tiger Gaming, the Pirates’ Plenty Battle for Gold online slot is a exciting, feature-packed game that is bound to earn itself a legion of fans. The treasure hunt-themed storyline and clever visuals provide all you could want from a pirate adventure, so fans of the genre are certainly in for a treat. 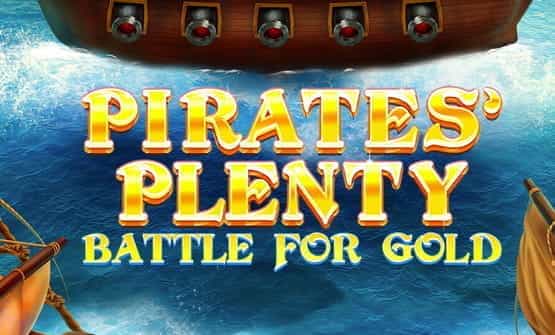 Pirates’ Plenty Battle for Gold Developer: Red Tiger Gaming
A 50 Spins BONUS IS AVAILABLE
Go to PlayOJO to claim your welcome bonus when you play Pirates’ Plenty Battle for Gold for real money!
PlayOJO
Rated: 5/5
PLAY This Slot Online Here!
Full T&Cs apply. For Every £1 you deposit, 1 Free Spin will be credited. Up to 50 Free Spins on Spina Colada. Min deposit is £10. This offer is only available for first time depositors. Game: Spina Colada | Spin Value: £0.10.

It’s important for slots like the Pirates’ Plenty Battle for Gold online slot that you try the game for free before you wager your cash. This is because there are so many features to discover that it’s worth knowing what you can expect from the real version so you won’t be disappointed down the line.

In the free play mode that we have provided, take your time to explore the familiar pirate symbols and paylines that may help you win big. See if you are happy with the high volatility of the slot, which – although means that rewards tend to be larger – serves up big wins much less often than a low volatility variety. 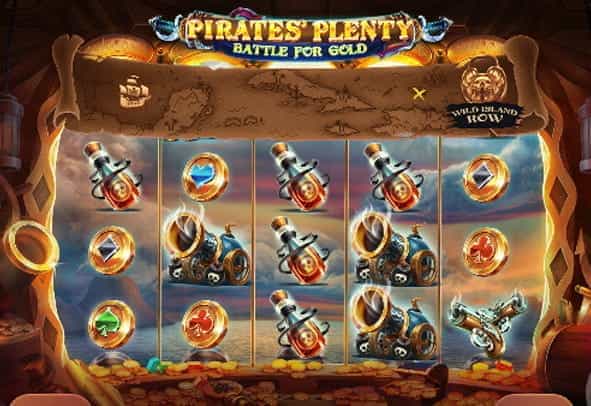 Once you start to play Pirates’ Plenty Battle for Gold for free, you will be introduced to the special features of the game and an explanation of the symbols and paylines. Then, an animation will play showing cannons firing from your ship to destroy another, setting the story up as a loot of sunken treasure. From here, the action takes place over 5 reels and 3 rows.

The ship’s cabin scenery in the background is beautifully drawn, with swaying lanterns and mounds of gold added for great effect. Above the reels, you will notice that a map is placed. This will change as you play, but we’ll explain that below. There is also an autoplay and turbo mode feature included, meaning that you can supercharge gameplay to be even faster-paced.

How to Play This Title

The rules of the game are standard for most casino slot titles. First, select your stake by choosing one of 11 betting options between 20p and £20. Then if you desire, set your autoplay and turbo mode functions and take the game for a spin. At first, there are 20 fixed paylines but this may increase depending on your luck. The aim is to hit the right combinations of symbols over the paylines.

As mentioned above, there are a several of the most popular and lucrative slot features present in this title that keep gameplay fresh and exciting. The first is the unlockable Wild Rows feature. This is introduced as the map at the top of the reels which sees a boat start on a charted journey. Every time a map symbol lands on the reels, this will progress the boat on the map.

Once enough map symbols have landed, the map will disappear and make way for a new row. This new row will then increase the number of payline to 30. The great thing about unlocking another row is that it increases the chances of the Battle Spins feature being triggered, which happens when three Battle Spins symbols land.

Battle Spins is a free spins round that is made more exciting by the occasional interference of Captain Blackbeard, who may trigger cannons to blow up symbols and leave sticking Wilds in their place. In the case that the cannonballs land on already stuck Wilds, more free spins will be rewarded.

The Wild symbol is represented by a monkey and substitutes for all symbols. When it lands, it will trigger a respin and steal all low-valued symbols and replace them with high-paying ones. Aside from the Wild and the Bonus spins, there are nine symbols that may land. The lowest four are represented by card suit symbols, and the other five are a vial, two guns, a cannon, a pirate’s hat and the skull and crossbones. The right combination can reward a win multiplier of up to 5,000x your stake.

If you’re comfortable with the free play version and want to take your chances on scoring big with the games’ unique features, you should now be ready to play Pirates’ Plenty Battle for Gold for real money. As the free version is a total replica of the paid version by Red Tiger Gaming, you will not need to know anything more going forward.

This game is a great title to play when you’re after something with plenty of features. In our experience, the game is kept fresh by the gradual unlocking of the Wild Row and the pursuit of the Battle Spins round. In this free spins round, wins occur often thanks to the sticking Wilds which is a huge bonus.

With the fun design and animations, intriguing gameplay mechanics and exciting features, this is definitely a game that is worth spending some time and money on. As the return to player rate of 95.72% is still fairly generous, we found that our wins generally increased as time went on due to the extra row and paylines that were unlocked with the extra row.

So if you are like us and love games with Free Spins, Wilds and unlockable features, it’s likely that this is the perfect game for you. If you are wondering where to play Pirates’ Plenty Battle for Gold, we’ve got you covered – we’ve provided a link to a casino that we recommend below.

Pirates’ Plenty Battle for Gold
50 Spins BONUS FOR ALL NEW PLAYERS AT PLAYOJO
Play to Win Real Money Online!
Full T&Cs apply. For Every £1 you deposit, 1 Free Spin will be credited. Up to 50 Free Spins on Spina Colada. Min deposit is £10. This offer is only available for first time depositors. Game: Spina Colada | Spin Value: £0.10.

Did you enjoy laying the demo in our Pirates’ Plenty Battle for Gold review but still want to check out a few other titles before paying real money? Don’t worry, we have you covered. Below, we’ve provided some recommendations on titles that offer a similar experience to this game but with different reel setups and special features.

These games were chosen because of their similar adventure themes and interesting mechanics. Of these, Gonzo’s Quest by the software developer NetEnt remains to be one of the most popular slots online. So if you have somehow not managed to try this we highly recommend taking the game for a spin to see what all the fuss is about before heading to the casino.