Introducing The Dark Knight from Microgaming, based on the 2008 blockbuster success of the same name. A must for fans of Batman and slots geeks alike, this game has fast become one of Microgaming’s most popular progressive video slots. You can’t fault the sounds and visual since both are lifted straight from the film. Try this cinematic slot for free or get playing for real with our top recommended casino. 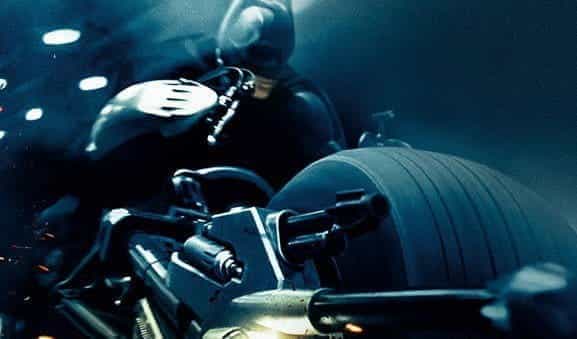 This game is packed with extra features, from Free Spins to Scatters and Jackpots. This slot is hooked up to the Mega Moolah jackpot network where all bets on this network of games feeds into the same pool of 4 jackpots from mini to mega. To add the the excitement, Batman and the Joker pop up randomly to reward bonuses amidst a reel of cinematic icons, with video clips from the film triggered on each win.

Play a Free Demo Version of The Dark Knight

Unfortunately, there’s no option to play this slot for free. Having no demo play option is a common feature of games with progressive jackpots, and the only real draw back to choosing a slot with this kind of accumulating payout system. Since there’s no possibility to play this game with a virtual balance you need to bet for real and deposit some money to enjoy it. 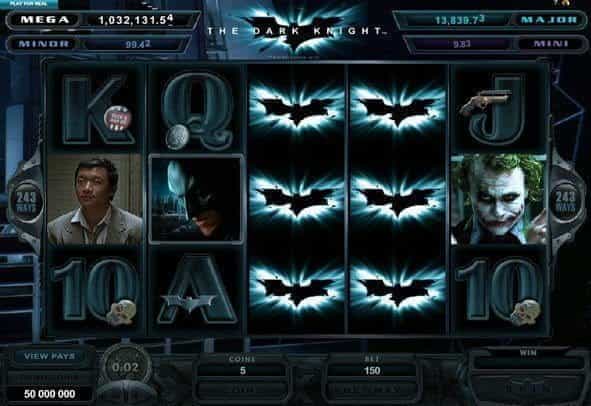 The entire cast is here and most importantly, our favourite caped crusader, Batman. The story is all too familiar, Batman is on a dark road to expelling the City of Gotham from the evil Joker. Due to the immense popularity of the film and the character there are in fact two Batman slots, both unfortunately bear the same name, The Dark Knight. The first was produced by IGT which held a DC license used to create their land based version and the second by the developers at Microgaming who made the online version. IGT’s game lets you play as Batman or the Joker and uniquely up to 3 people can play simultaneously in a multiplayer game, you will of course have to find a land based casino to experience this immersive experience. Also a Dark Knight rises slot, available online!

Understanding the Rules and Features

This game is in the popular 5 reels 3 rows slot machine format. Although there’s no paylines, there’s 243 ways to win. Place up to 10 coins per bet and get spinning. There’s a total of 14 winning symbols, from the 5 standard card deck icons to the 9 higher paying character symbols. Naturally batman is the highest payling, awarding up to 2,000 coins when 5 hit the reels, closely followed by Commissioner Gordon, Rachel Dawes and Harvey Dent.

This games Wild is of course the Dark Knight logo, it substitutes in typical fashion, for all other symbols expect Scatter to make up wins. This unpredictable symbol randomly acts as a stacked wild meaning you can create even more winning combinations.

The Dark Knight has two bonus symbols. The Scatter symbol is hard to miss, being a combination of the Batman logo and the Jokers eerily smiling face. Landing 2 rewards a 2x multiplier whilst 3 or more will trigger free spins with the same multiplier applied to all wins. There’s up to 15 free turns up for grabs depending on how many Scatters you get. During free spins the games logo acts as a stacked Wild accelerating the winning potential. Keep your eyes peeled for the Batman and the Joker, both popping up randomly, taking over the entire screen, giving out prizes from bonus credits to whole reel wild symbols.

Now on to the main event, the progressive jackpot feature. This is triggered completely at random whether you’ve won or lost in a spin. Choose a side between good and evil and spin, since each side has an arrow which points to the jackpot wheel. The wheel is spun and will land on one of the four jackpots, each represented by a coloured segment. The way the wheel segments are divided, you’ve got a better chance of winning the mini jackpot, even so should you hit the Mega you’re on for at least a million!

The Dark Knight for Real Money

Feel the thrill of The Dark Knight by playing in an online casino for real money. We’ve picked this casino specifically as the best place to part with your hard earned. We all like a bonus, and this casino has the best around, especially if you’re new to their site, since new players are gifted a neat welcome package just for signing up and playing for real money. Generously, their welcome incentive has a bonus which can be used on all slots games.

All slots use random number generators which ensure the outcomes of the game are fair and give all players a fair chance of winning. Most slots publish a percentage return to player figure, which is a term coined by casinos to describe the amount of money a slot is expected to payback over time. Although this is a purely theoretical figure, this game’s RTP is high at 97%.

DC Comics has wasted no time in expanding their licensing into the sphere of gambling – which is why you’ll see several iconic superhero-themed slots among the many slot titles I’ve reviewed. But when it comes to movie production companies, their reeach doesn’t stop with superheroe. Comedies have also gotten the reel treatment, as you can see with Ted or the Monty Python titles.