Fans of live casinos can rejoice! Superstar developer, NetEnt, has announced that it will be releasing a brand new blackjack game for its live casino suite. Perfect Blackjack is the first product of its kind in the industry and is already being hyped up as one of the most exciting and significant game releases of 2019. Those hoping to get a sneak peek at the game can do so at this year’s ICE, where it will be exhibited at the NetEnt stand among the rest of the developer’s stellar live catalogue. It’s early in the year yet, but Perfect Blackjack could become one of the year’s best releases.

What Makes Perfect Blackjack so Special?

If you’ve played live blackjack before, you’re probably wondering the exact same thing we all have – what makes Perfect Blackjack so special, and is it really so different to existing live blackjack variations available online? According to the official press release, Perfect Blackjack differs from other games on the market in that it allows players to have their cards dealt according to the perfect blackjack strategy. This cuts the house edge down to as little as 0.5%, with an RTP of 99.5%. Naturally, this all sounds very appealing from a player standpoint. That’s not all the game purports to bring to the table, though. Another selling point highlighted in the press release is the title’s speed, owing to the fact that the cards are dealt automatically according to the perfect strategy. Additionally, players are given the opportunity to pre-select whether or not they want to double down or auto-split. The game also boasts a refreshing level of flexibility and scalability, thanks to its multi-seat feature and the ability to host multiple players per box. All in all, critics and players alike seem enthused about the new addition to the online live blackjack landscape.

A Collaborative Effort Between NetEnt and Rank Group

Perfect Blackjack was developed by NetEnt in collaboration with the Rank Group, who owns and operates Grosvenor Casinos among others. Richard Walker, the current Head of Live Casino at Rank, believes that the game will have a broad appeal, attracting both hardcore live blackjack fans and new players.

“We are delighted to launch this innovative new game and excited to deliver an educational game to our customers and eliminate the boundaries of trying Live Casino. We have been working closely with NetEnt to develop Perfect Blackjack and we’re confident it will be a huge hit with both new and seasoned players alike.”– Richard Walker, Head of Live Casino, The Rank Group

NetEnt Live director, Andres Rengifo, agrees. He echoed Walker’s sentiments, stating that, “Perfect Blackjack truly is an industry-first for live casino, and we are certain that this game will appeal to all levels of players. Whether you’re a seasoned player wanting to sit back whilst being dealt flawlessly, or if you’re a beginner who wants an intro to blackjack and its strategy.” Thanks to the collaboration with Rank Group, the game initially will be available exclusively on the Grosvenor Casinos site. Though no release date has been named as of yet, Perfect Blackjack is expected to be available online within the next couple of months.

Will This Leave NetEnt’s Competition in the Dust?

NetEnt isn’t the only developer pushing a “world’s first” title this year. The company’s main competitor, Evolution Gaming, unveiled ten new games at London’s ICE Totally Gaming 2019. Among them was its new Deal or No Deal property. In addition to being a branded title based on the popular television show, it holds the honour of being the world’s first live game to be available 24 hours a day, seven days a week. When discussing the motivation for creating a 24/7 game, Evolution Gaming’s Chief Product Officer, Todd Haushalter, named the constant availability of media outlets like YouTube and Netflix as inspirations. Discussing the game, he said,

“We wanted to stay true to the game show that people know and love, retaining the engaging presenter and thrill of awaiting the offer from the banker but all the while making it compatible for online players as a live game. With that in mind, we embarked upon what has been the most complex studio that Evolution has ever built to date.”

Evolution will also be releasing Free Bet Blackjack this year, alongside a mystery game that has critics and players guessing what the company is hiding up its sleeve. Though NetEnt is definitely angling for an edge on the live blackjack market, it’s safe to say that the competition is still fierce between these two companies. 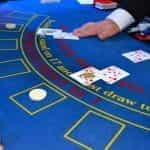