Continuing a two-year downward trend, Louisiana’s Baton Rouge casinos are failing to raise their revenues, most prominently in the riverboat casinos sector. Belle of Baton Rouge suffered the greatest losses in August 2019 and is named as the source of the city’s lower earnings, with a 24% decrease in profits compared to August 2018. Overall, however, losses were not as severe: on average, Baton Rouge casino revenue for August 2019 from the year before.

Storms Had Been on the Horizon

According to a report on August revenues for Baton Rouge casinos, the profit loss should have been anticipated: writes Austin Kemker for WAFB9 L’Auberge Casino & Hotel opened just down river from the Belle of Baton Rouge and Hollywood opened back in 2012, economists warned the area would not be able to support three large casinos: “Seven years later, all three casinos remain open, but business is nowhere close to what it used to be.” 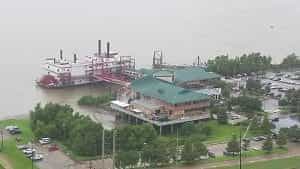 The Hollywood Casino in Baton Rouge also suffered losses in the last two years, though not as severely as the Belle © Wikimedia

Cautious economists such as Loren Scott emphasized that Baton Rouge’s casino market is “strictly local,” and, due to its size, would not be sufficient to “support all three.”.

The predictions proved astute: prior to the 2012 opening of L’Auberge, another riverboat casino in the city, the Belle of Baton Rouge made $6.05 million that August. This August, the Belle’s earnings fellto $2.35 million — a 61% loss overall. Riverboat casino Hollywood was similarly plagued by profit loss in the last seven years: this year, they made 51% less than they had in 2012 (from $9.3 million to $4.5 million this year).

Overall visitor traffic has also dwindled between two out of three of the city’s riverboats, falling from between 80 and 90,000 guests for August 2012 to 30-50,000, with the Belle of Baton Rouge again suffering the greatest loss (from 82,242 to 31,414). L’Auberge continues to come out on top, earning more in profits and visitors than Hollywood or the Belle of Baton Rouge.

This year, L’Auberge Baton Rouge and Hollywood Casino both experienced slight revenue increases for August (4.5% and 3.2% — $13.2 million and $4.5 million, respectively), while the Belle’s crashed. 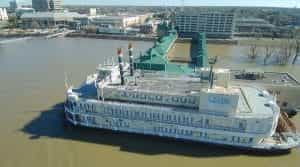 The Belle of Baton Rouge is the oldest riverboat casino in the city, now planning to celebrate its 25th anniversary. In October of 2018, the casino was was sold to Eldorado Resorts by Tropicana Entertainment for $1.85 billion. Already at the time of the sale, Eldorado executives announced their hopes to refurbish the casino’s property. Since then, the Belle’s general manager, Jim Rigot, has mentioned significant potential renovations, from condensing the Belle’s multiple stories to a single floor (L’Auberge, the Belle’s newer and more successful competitor, offers their gambling facilities on just one floor) to moving the riverboat casino to shore. This would not be the first time this move has been considered for the currently afloat casino: while owned by Tropicana Entertainment, this shift had also been discussed.

In other interviews, Rigot has said that the Belle is “antiquated, outdated, and needs a lot of help.” Others have noted potential detriments to visitorship at the Belle could be a ban on smoking, as well as its attractions growing stale. Still, despite the significant losses for the quarter-century-old casino, there are not yet talks to shutter the business. 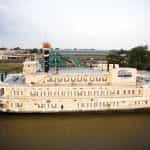