The online casino software provider Play’n GO has been included in the shortlist for this year’s EGR Operator Awards Game of the Year category. The event, heralded as the “Oscars of the eGaming sector”, takes place at Grosvenor House in London on the 25th of October.

The EGR website states that the award recognizes the “game studio or operator that has produced the stand-alone game that has made the biggest impact during 2018.” This is an impressive feat considering the number of developers active in today’s eGaming market.

The nomination marks the second time Play’n GO has been up for the award in as many years. The company was also shortlisted last year for the boundary-pushing Viking Runecraft slot.

When speaking about the performance of Sweet Alchemy, Play’n GO CEO Johan Törnqvist, stated, “We all know how crowded the gaming market can be. A lot of great titles have been released this year, so it’s an honour for one of our games to be recognized for its impact.”

He would further go on to say, “Sweet Alchemy has gone from strength to strength since its release and is a further testament to our strength in creating innovative games like our cascading gridslots. I’m very proud of all the people who worked so hard to make such an entertaining game.”

Play’n GO will be up against other companies including the Swedish providers ELK Studios and NetEnt that, both having previously won the Game of Year Award, will be tough to dethrone.

Due to its recognition as the Best Slot Provider of the Year at this year’s EGR B2B awards, Play’n GO are surely this year’s favourite to win Game of the Year despite the tough competition. 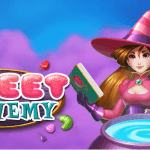