Quickspin co-founder, Joachim Timmermans, has left the studio. In a LinkedIn post shared on the 28th of December, Timmermans heralded his departure by announcing that it would be his final week working for the company.

Timmermans played a key role in the company, serving as Chief Product Officer since the studio’s establishment in September 2011. In 2016 the studio was acquired by Playtech.

Prior to co-founding Quickspin, Timmermans held the position of Head of Casinos and Games at Unibet, and from 2011 until 2016 he also worked as a senior advisor to Plumbee. Speaking about his departure, Timmermans wrote,

“The company is doing great, we’re growing healthily in both revenues and people. I do however feel that my part has been played, so it’s time to move on! I wanted to express my gratitude and recognize some people that have made these amazing years possible.”

He went on to name Quickspin’s working relationship with Relax Gaming as a highlight of his time spent with the studio, saying, “Another milestone in our journey was the relationship with Relax. We needed a platform, they needed customers; we formed the perfect match. Thanks Daniel Eskola for setting up this relationship and Patrik Österåker for the support all these years.”

The move seems amicable on all sides, with Quickspin CEO and fellow co-founder, Daniel Lindberg, writing a glowing send-off to Timmermans.

“After co-founding the company almost nine years ago and serving as CPO for the last seven, Joachim has earned himself some very well-deserved time off. We look forward to announcing his successor in due course and wish him the very best.”– Daniel Lindberg, CEO, Quickspin

To date, Timmermans has given no word on what the future holds for his career in the industry, instead merely stating that he intends to take a “long holiday”. Likewise, Quickspin have yet to publicly name his replacement. 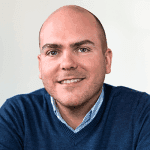