Swedish casino game production company, Yggdrasil, has paid out a record-breaking jackpot prize of SEK80 million (£6.8 million) to a lucky player in its home country.

We are thrilled to see a player win such a life-changing sum of money, especially this close to Christmas and while playing one of our slot games on mobile. –Fredrik Elmqvist, Yggdrasil CEO

“Joker Millions is our first progressive slot and it is beloved by both operators and players. With more operators continuing to join the Yggdrasil network, the jackpot will be building up again quickly.”

James Ford, Head of Casino at LeoVegas, added, “What a record win! Progressives like this always create excitement. We’ve been keeping a close eye on this one in anticipation that it would drop. We’re really happy it was triggered at LeoVegas and pass a huge congratulations on to our lucky player.”

According to Yggdrasil, this giant win brings the total sum of the payouts from the company’s two global progressive jackpot games to approximately £23.4 million. The development firm’s other progressive jackpot slot, Ozwin’s Jackpots, was launched in January 2018.

The Swedish gamer is not the first person to win a staggering jackpot prize while playing on the LeoVegas mobile casino platform. In April 2018, a €10 wager on the NetEnt progressive slot game Hall of Gods paid out a jackpot of €6.7 million (£5.83 million).

At the time, LeoVegas Casino Director, Karolia Pelc, was quoted as saying, “We are delighted with the latest massive Jackpot winner. Hall of Gods has been a favourite among our players for a long time, and with the recently added mobile version we have seen the game reach new heights in activity and turnover.” 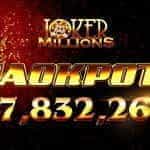