The Japanese anime culture is popular across the world, and since the 1980’s it has become widely-integrated into the modern film, art and entertainment. The casino and gambling industries have massively appropriated anime into many of their popular products, slot machines and online casino games embellish the visual and enchanting aspects of anime.

The coalescing of anime culture with casino gambling is a profitable partnership, helping to grow the fanbase of the classical Japanese artform, whilst enriching the game developers working in the gambling sector. ©jsks/Pixabay

Even for those not familiar with Japanese culture – or couldn’t identify the country on a map – the cultural pillars of Japan such as sushi, exotic teas, kimonos and anime are globally recognized. The most exported of this heralded cultural phenomenon is that of anime, which has disseminated itself into gambling in many different forms over the years.

Like most cultural traditions and identities of Japan, anime has deep roots in Japanese history. Its origins can be traced back to 1906 where artists adopted the drawing style to use of glass panels in magic lantern shows performed in front of a live audience. It quickly morphed into one of the nations most celebrated forms of entertainment, shaping the film industry of the 20th century and even finding itself utilized by government agencies for propaganda initiatives.

As Japanese anime slowly entered the popular-culture mainstream, it underwent a major transformation in the 1980s. A new generation of directors and studios developed innovative techniques to popularize their art throughout the world. Individuals such as Hayao Miyazaki pioneered a movement that brought anime to an international audience. Throughout the 1990s the viral appeal of anime continues helped considerably by smash-hit productions such as Dragon Ball and Death Note.

The proponents of the celebrated Japanese art-form probably never envisioned their creativity would hold such utility in the psychological framework of online gambling. The throbbing music and the enchanting graphics have become an integral part of famous slot machine titles, online casino design philosophy, and indeed the atmosphere created in Japanese Pachinkos is heavily influenced by anime art.

Nowadays, the plots underpinning many of the casinos most played games involve magic realms, and provoke feelings of ambition and bravery in players. These themes are being directly translated from anime into gambling products. But further still is the visual similarities, the color schemes and artistic style is borrowed from anime.

Psychology in commercial gambling has always been a prominent design strategy for developer studios. Rewarding sounds and aesthetically pleasing visuals help enhance the enjoyment of a player and create a feeling of satisfaction enabling longer and more prolonged periods of play. Obviously, the ultimate goal of gambling product design is to increase profitability for the house, anime’s appeal helps build excitement and loyalty amongst the gaming community.

Whilst anime is becoming increasingly prevalent across all forms of gambling both land-based and online, there has been no greater benefactor from the mesmerizing allure of anime than the Pachinko slot industry. There are hundreds of Pachinko parlors across Japan, operating in a legal grey-area the business model exploits a legal loophole that allows the games to only reward voucher coupons to winning customers – that can be subsequently exchanged for real-cash off-premises.

Upon entering a Pachinko parlor you’ll be immediately confronted with the pulsating neon-lights, animated voices and jingles, and rows of machines occupied by seemingly hypnotized players. At the machine screen, itself is usually a rolling clip of a popular anime title rolling through a segment designed to entice the user to find out what happens by playing at the machine.

The coalescing of anime and the Pachinko business model was highlighted in a recent report released by the Association of Japanese Animations looking at the monetary value of anime as a Japanese export and breaking down the major contributors to this value. According to the report, the anime ecosystem has a market value of $19bn – of which the largest contributors were sales and goods, third place was the Pachinko parlor contributing a huge ¥280bn.

The growth of anime popularity means the close association with gambling products shows no signs of slowing down, and in fact, newer slot games such as Swipe Girl and Moon Princess were designed to be marketed towards the Japanese market. The formation of a gambling and anime partnership continues to generate massive profits for companies in both industries, as game studios across Asia continue to churn out anime-themed slot games. 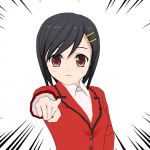