Rugby World Cup Next Round Tips

The World Cup so far has been exceptional in terms of on-field action. Off the field, there have been a series of mishaps and dark spots that have slightly taken the shine of the incredible rugby we have seen so far at this World Cup. 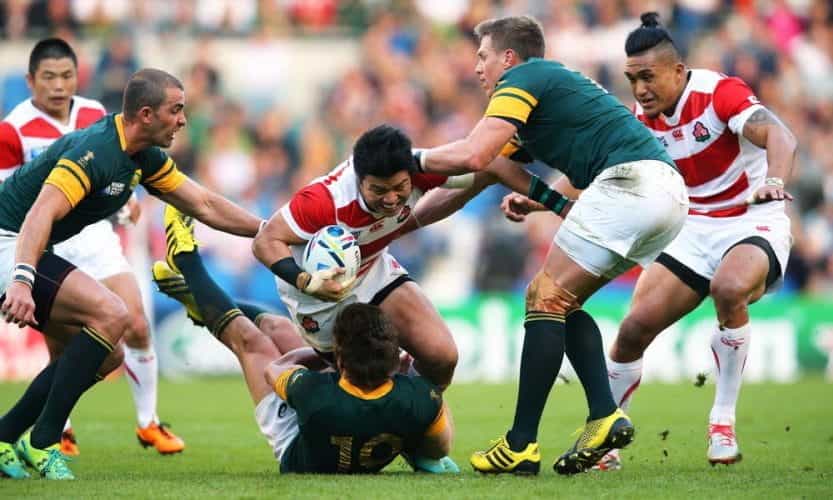 The Japanese Rugby outfit achieved the unthinkable defeating Ireland in an epic showdown in front of their home fans. ©Ministry of Sport

The weather is uncontrollable of course, and the tournament has seen two games canceled thus far whilst Japan east-coast has been battered by a terrible storm and floods – claiming the lives of 60 people. Despite this, the tournament continues and the hosts Japan are making their people incredibly proud after claiming two huge scalps, beating both Ireland and Scotland in defiant and dominant displays of conditioning and dexterity. But what about the games coming up this week? Our experts take a closer look at the current dynamic and bring you our informed predictions on the upcoming games of the Rugby World Cup 2019.

Betting on sport is at times a game of cat and mouse. One approach is to go solely on the data and statistics available and try and make a betting decision that correlates accordingly. This can result in a few typical errors, as any statistician pr mathematician will know, in probability theory when an event is independent of events taking place before, what happens before does not mean it has a higher chance of happening again. This conundrum is known as the gamblers fallacy, betting on something such as the total points in a match being more than 50 purely because it has occurred 3 times consecutively before for a particular team. This method is flawed, and will not yield good results. In fact, this is a very amateur approach to rugby betting, and sports betting in general. Bookmakers rely on their customers lacking basic knowledge in probability distributions. We’re here to teach you not to fall into this trap.

The way to bash the bookies is by being deeply knowledgeable about the context of the fixture you are betting, and to use a learned instinct for spotting good value in the offered odd prices. This is not as easy as it sounds, bookmakers hire armies of talented computer scientists, quants and sports experts to design machine learning algorithm systems and mathematical models that maximize equity over probability space for the betting company. By understanding the context of the fixture, such as the injuries of a squad, or the pre-game preparation of key players, you can outmaneuver them in certain ways. In-play betting also allows for a higher chance of snapping up good odds. Our betting tips are deeply rooted in this contextual knowledge. Although we all love to make a bet instinct and emotion at times, this is an ineffective way to maximize your profits.

With the group games now concluded – the tournament has reached the knockout stages, where the teams finishing in the top 2 positions from each of the 4 groups proceed to the quarter-final matches. With the 4 monumental quarter-final matches being played on the 20th October, we thought we would bring you a detailed analysis of each match, and provide some top tips to assist you with your betting decisions.

The Japanese have truly defied expectations so far in this tournament. They put in a herculean effort against Scotland to ensure they maintained a perfect winning record in the group. The levels of fitness and technical skill shown by the Japanese in the games against Ireland and Scotland, in particular, have truly cemented their status as a top-tier international rugby nation. South Africa will be their toughest opponent yet. As they enter the World Cup quarter-finals for the first time, the world will be watching. With the home support behind them, they will be hoping to achieve the unthinkable and land themselves in a semi-final match against either Wales or France. South Africa are a very strong outfit, they will have studied the victories of Japan and will be preparing to avoid making the same mistakes as other teams that have capitulated against the Rising Sun Nation. Top Tip: Japan + 9.0 Handicap 7/4 (2.75)

The opening game of the knockout stages looks set to be an absolute cracker. Kicking off Saturday morning at the Oita Bank Stadium on the Kyushu Island sees the winner of group C (England) against the second place of Group D (Australia). Eddie Jones will be confident in his England side and will be expecting them to continue the era of dominance over Australia by continuing there 6 consecutive win streak they currently have against the Aussies. But this is the World Cup quarter-finals, statistics and past head-to-head results carry far less importance in a game of such gravity and magnitude. More important is the form and fitness of the squad. England will be hoping to up the intensity from their group round matches, whereby they went relatively untested due to the final group match against France being called off due to the weather. This will be a tough test for England, but one they will fully expect to execute and pull-off a decisive victory. Top Tip: England -8 Handicap – 9/10 (1.90)

This game looks set to blow the roof off the Tokyo Stadium on Saturday, as the All Blacks take on Ireland. As the winners of the previous two Rugby World Cups, New Zealand are largely considered the favourite for this competition, and by the rugby they produced in the opening round of group matches, there is no reason to doubt this squad has the potential to go all the way for a third time in-a-row. Ireland will have confidence though, securing their first win against the All Blacks 16-9 last year on home soil will be the framework of preparation they take going forward into this huge test. Hansen’s All Blacks have lived up to expectations so far, with a decisive and entertaining victory over South Africa in the group they seem to have only gained strength and speed in their back-line since the last major tournament. Top Tip: New Zealand to be winning at Half Time and Full Time – ½ (1.50)

Wales and France go head to head at the Oita Stadium this Sunday in the Oita Stadium on Kyushu Island. This game has all the hallmarks of an absolute belter and we can’t wait to see what the Welsh will conjure up against a resilient France side. After topping their group, the Welsh will be wholly confident in their abilities to defeat France, which is a team that is very much in transition and lacking quality players in a number of key positions across the field. With that in mind, the Welsh backline will be aiming to recycle the ball quickly at the breakdowns, play through the backs and exploit the lack of speed in the French pack moving across the pitch. Top Tip: Wales – 6.5 Handicap 9/10 (1.90)

Who Will Win the World Cup?

It is seemingly impossible to call a World Cup winner out at this stage, as there are several teams that haven’t really been tested yet and so many upsets already. But if one was to objectively look at this situation, there are several contenders. New Zealand is a bookies favorite at 6/5 (2.2) with South Africa at 10/3 (4.33) and England 4/1 (5.0). Given the lack of injuries and the strength and confidence of the squad, Our Top World Cup Winner Tip is England. If you disagree with this hypothesis, we can only respect that, as nobody really knows what will happen in these blockbuster Quarter-Finals and Semi-Final matches. If you fancy having a flutter on the hosts Japan to go all the way they can be backed at 40/1 (41.00). Rugby fans across the world will be shaking with excitement in the build-up to the four matches this weekend. This tournament has been epic so far, the on-field drama and unexpected results have been a testament to the sport and will hopefully inspire a new generation of players to take up the great game of Rugby.