A Journey Through the History of Roulette

Roulette is one of the oldest casino games which is still played nowadays. In this article, I will show you how the game first started and how it has evolved and spread across the world throughout its 400 year history. See the differences that have occurred since its invention, right up to modern day online versions of the game.

The Invention of the Game in the 17th Century

The origin of the game is not 100% clear. It is thought that it probably evolved from the Wheel of Fortune, or Rota Fortunae. This concept comes from medieval and ancient philosophy, where the goddess of fate turns the wheel, and the rise and fall of a king is shown. This symbolises happiness and unhappiness and is a good metaphor for gambling. 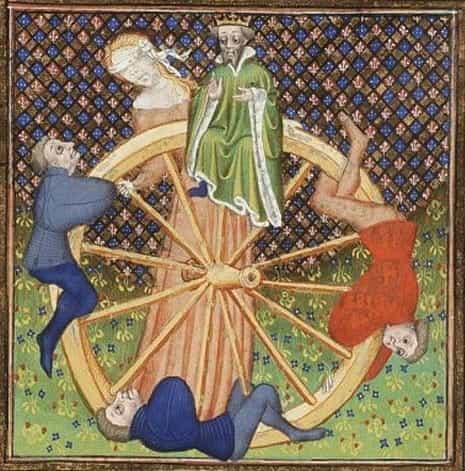 The wheel of fortune represents luck – the goddess of fate is responsible for its rise and fall in the course of life. The blindfold symbolises the randomness of events.
E.O. (Even/Odd) 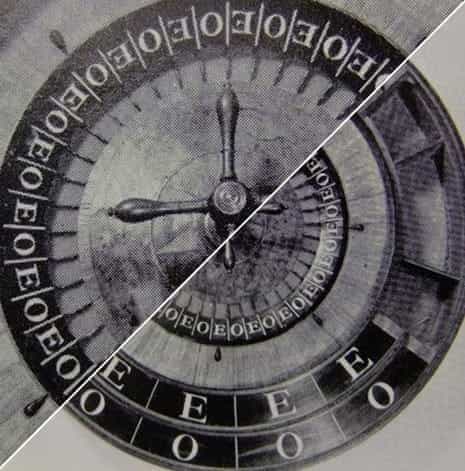 The even and odd positions resemble the simple chances of red/black on the roulette wheel. This game is thought to be one of the main influences on the game of roulette.

Other influences are attributed to English E.O. games (even/odd), and the Italian board game Biribi. There are also other games that have been linked to the invention of roulette, but there is no clear consensus as to which are completely accurate. 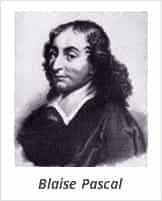 It is widely believed that roulette was originally invented by the French physicist Blaise Pascal. A prominent figure in the world of science and mathematics, Pascal broke ground in his research. His work introduced the mathematical theory of probability. Previously, there was no study of the probabilities linked with gambling. Whilst researching cycloids, he wrote a famous treatise entitled “L’Histoire de la Roulette”. This title was given as the search for a formula to calculate cycloids involved the rolling of wheels. It is believed that the roulette wheel, in a primitive form, was the bi product of his quest to invent a perpetual motion machine.

Amongst these various theories about the origins of roulette, the most likely is that the game was invented in Italy in the 17th century. In fact, until around 1900, encyclopaedias called the game which had 38 numbers either “Italian Roulette” or “Big Roulette”. A smaller version of the game, played with just 18 numbers was referred to as Small Roulette, or German Roulette.

In the 18th century, the game came to France, where it became very famous and popular in casinos. It had a slightly different layout to the modern game. In the late 1790’s, the game had a zero, which was red and a double zero, which was black. However, despite the colours, these were house pockets. So if you bet on red or black, and the ball landed on the zero or double zero, you would lose your bet. In order to avoid confusion, the zeros were coloured green from the 1800’s.

When roulette began to be played in France, King Louis XV tried to ban the game. In fact, in 1806, Napoleon Bonaparte allowed roulette to be played only in the casinos of the Palais Royale. The game was outlawed altogether in 1837, when Louis Phillipe closed down all casinos in France. This led to the golden era of German casinos in Baden-Baden, Bad Homburg and Wiesbaden. During this period, the famous novel “The Gambler” was written by Russian author, Dostoyevsky, based on his experiences in the Bad Homburg Casino. In order to get an advantage over the competition, in 1843, brothers François and Louis Blanc, of the Bad Homburg casino removed the double zero from the roulette wheel. Soon after, the single zero variant of the game could be found at casinos throughout Europe.

The Bad Homburg Casino Under the Management of François Blanc

In the 1860’s, casinos were outlawed across Germany, only being re-opened by the Nazis in 1933. The gambling ban in Germany and France meant that across Europe, it was only in Monte Carlo that casinos continued to operate and thrive. The Blanc brothers moved their operation to Monte Carlo, where they established a prestigious and elite gambling mecca. It was here that the single zero variant of roulette became so popular, and in the years that followed, it was exported throughout the world.

The Story of American Roulette

Not only did the game flourish in Europe in the 18th century, it also made its way over to America around the same time. The earliest forms of the game had only 28 numbers, plus a zero, double zero and an eagle symbol. The eagle – the American symbol of liberty – added extra house edge for the casino. If the ball landed on this or the zeros, then all bets would be lost. Yet this different version of the wheel soon gave way to the European version of the game, with numbers 1 – 36, where zeros only provided the house edge.

The Spread of the Game in America 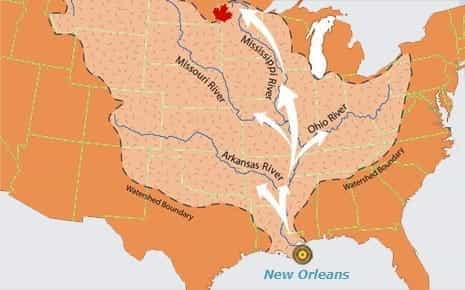 From New Orleans, the game was played on paddle steamers up the Mississippi, and later spread further westwards into the frontiers
The First American Roulette 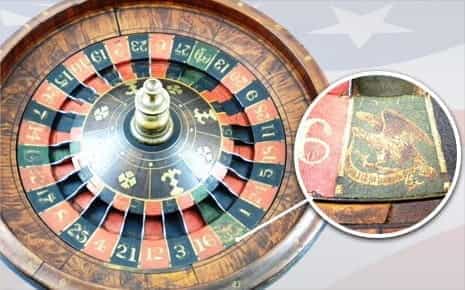 The earliest versions of American Roulette had only the numbers 1 – 28, plus a zero, double zero, and another house pocket – the eagle

Having first appeared in New Orleans, the game worked its way up the Mississippi on the paddle steamers and later westwards. There are also references to the game found in published regulations for Quebec in 1758 (or “New France” as it was then known), where the game was banned, along with some other gambling games. 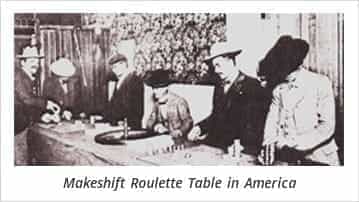 The style of play in America also differed to that in Europe. Within the casinos of Monte Carlo, the game evolved with style, providing a high end, leisurely playing experience. Whereas in America, across the new territories, the game was played in gambling dens. Owing to the practices of cheating by both players and operators, the wheel was placed on top of a makeshift table. This prevented any devices being hidden under the wheel that could manipulate the results. The American Roulette layout was also adjusted to provide simplified betting options, thus making the pace of the game faster.

Whereas the trend in Europe was for the roulette wheel to include just a single zero, the double zero, with its higher house edge remained dominant in the USA. This remains the main difference between the modern versions of European and American Roulette. The American variant of the game is also dominant in Canada, the Caribbean and South America. Whereas the single zero version of the game is predominant elsewhere throughout the world.

20th Century and the Rise of Online Roulette

For the early part of the 20th century, casinos were not widespread. The only two noteworthy places where you could play were Monte Carlo, with the single zero version of the game, and Las Vegas with the American double zero. From the 1970’s, the popularity of casinos increased and they began to flourish across the world. Yet the real boom came with the spread of the internet. With more and more homes having an internet connection, this led to a new generation of casinos where you could gamble online, leading to the best online roulette casino sites that we can access today. Kicking things off was InterCasino, which is credited as the first online casino, having opened its virtual doors in 1996.

The evolution of internet casinos has brought many changes to the way people play. You can play round the clock, with both American and European versions of roulette available. What’s more, the advancement of computer technology has allowed many new and innovative versions of these games to be developed. With physical limitations removed, there is a plethora of variations of the traditional games that can be played online. Some examples of these new types of games include Multiball Roulette, Pinball Roulette, Mini Roulette and Multi Wheel Roulette.

All Or Nothing Real Life Roulette Story

In 2004, British gambler, Ashley Revell, sold everything he had, including his clothes – and placed all the money – US$135,300 – on red at a roulette table in Plaza Hotel and Casino Las Vegas, Nevada. The risky bet was broadcasted live by Sky One as the wheel whirled and the ball came to a rest on red 7 – and Revell walked away with $270,600 in his pocket, giving a $600 tip to the croupier. “It all happened so fast,” Revell said. “It was over before I knew it.” When asked if he wanted to try his luck again, Revell said: ‘No that’s it for me…I don’t want to ride my luck.” Revell’s mother is now begging him to settle down, but the chances of that are slim, as Revell has decided to become a professional poker player. 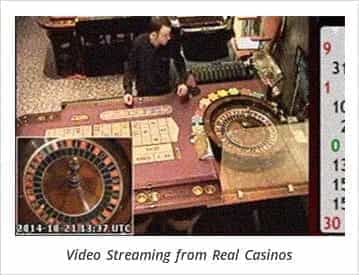 Whereas the benefits linked with the evolution of online casinos were numerous, there was one factor that remained missing – the atmosphere of a real casino. There is no doubt that playing online using casino software is simple and convenient, but it can be less exciting than playing in an actual brick and mortar casino. In order to address this issue, in the new millennium, some online casinos began to offer games streamed live from real casinos. The first company to provide real games to online casinos was VueTec. These first live games used a web cam to stream games from a land based casino. Players at online casinos would bet on the games that were taking place, with the winning number being determined by a real roulette table, rather than an electronic random number generator.

However, this first attempt at providing live games to online casinos had significant weaknesses. Of course, the casino operators did not want to disturb the players within their venues, so cameras were mounted high above the table, or on the ceiling. This was problematic for online players as you would not get a clear view of the table, due to the distance of the camera. Also, other players would get in the way of the action. Online players were not able to interact with the dealer at the real table either. As for the quality of the video streaming, there was a lot of room for improvement. Internet connections at the time were too slow to allow high quality streaming, which again impacted the overall experience. 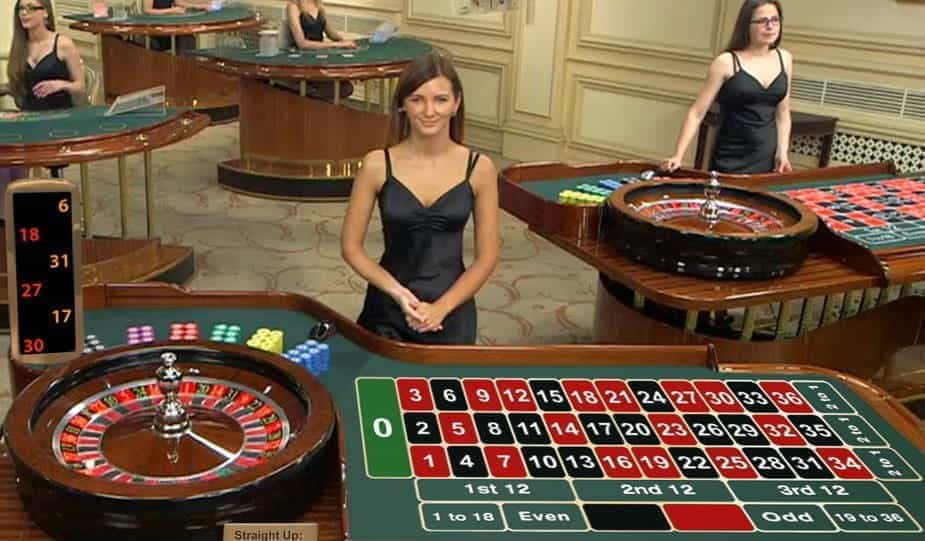 It was not until 2006 that the first dedicated live casino studios were introduced. The current market leaders, Evolution Gaming started the move, by introducing studios that were custom made for providing casino games with real dealers to online casinos. There were significant advantages of creating a studio exclusively for streaming live games. For starters, cameras could be better placed so online players could have an optimal view of the game. What’s more, numerous cameras could be used, providing various different views of the game, and close up shots of the action. Of course, this approach also eliminated other players from interfering with the view, making the game and the croupier clearly visible to the player. Also, for the first time, interaction with the dealer was possible. This undoubtedly improved the atmosphere, bringing it closer to the experience of playing in a real casino.

Different game variants were later introduced with live dealers. Games such as Sports Roulette and London Roulette were offered by some providers. Yet any variants of the classic game were based on the French/European game, with its single zero. There are no live casinos that offer American Roulette. The latest craze in live games is Immersive Roulette. The game offers true HD quality, and numerous camera angles, with close ups and slow motion replays, that really get you up close to the action as it happens. This innovative and cutting edge game has been a huge hit with players, and was even awarded the title of Game of the Year 2013 at the prestigious EGR awards. If you fancy trying out the game for yourself, you can play Immersive Roulette at 888casino.