#ad
Grand Ivy
18+
This site contains commercial content
Advertisement Disclosure
This independent comparison website helps consumers choose the best available gambling products matching their needs. We offer high quality advertising services by featuring only established brands of licensed operators in our reviews. We receive commission for advertising the brands listed on this page. This may influence brand ranking. Please note that although we endeavor to provide you with up-to-date information, we do not compare all operators on the market.
Main menu
Popular Casino Games
Overview of All Casinos
Best Online Casinos Mar 2021
List of All Real Money Casinos
Featured Pages Trending
back to top

Emperor of the Sea is a swashbuckling adventure packed with special features and opportunities to win. Let us take you through what makes this game so bountiful, plus how you can make the most of what’s on offer. Find out how and where to play Emperor of the Sea online, and try out our free demo! 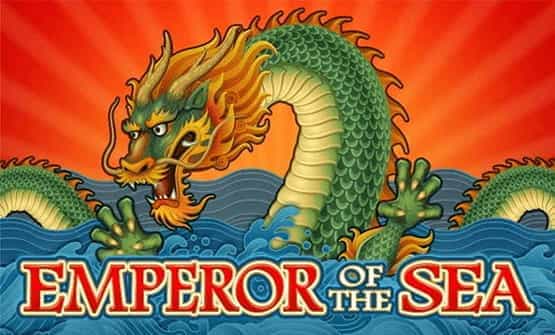 Emperor of the Sea Developer: Microgaming
A £50 bonus is available
Go to Betway to claim your welcome bonus when you play Emperor of the Sea for real money!
Betway
Rated: 4.3/5
Play Emperor of the Sea Online Here!
Full T&Cs apply. New customers only. Opt-in required. 100% Match Bonus up to £50 on 1st deposit of £10+. 50x bonus wagering applies as do weighting requirements. Debit Card & PayPal deposits only. This offer is valid for 7 days from your new account being registered.  Irregular gameplay may invalidate your bonus.

In this Emperor of the Sea review, we’ll take you through all the ins and outs of how this slot works. Read on to discover which symbols boast special powers and which you’ll need to land to trigger the biggest wins. When you’re ready to try out the real thing, we’ll even point you to where to play Emperor of the Sea.

Play Emperor of the Sea for Free

Whether you’re a newcomer to online casino games or a slot aficionado, it’s always advisable to try out a game before you put any real cash on the line. Not all slots are the same, and many feature innovative mechanisms that can take some getting used to.

One of the great things you’ll learn in this Emperor of the Sea review is that this slot is a simple and easy to play slot. That doesn’t mean you shouldn’t practice on the free demo we’ve provided below though. Play Emperor of the Sea for free below, and find out for yourself how to get those reels rolling! 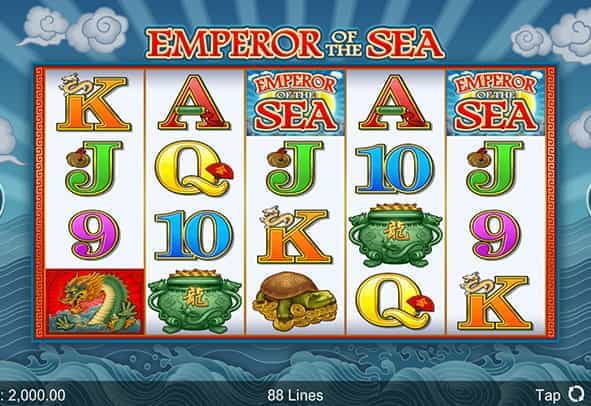 Emperor of the Sea

This free demo is virtually identical to the real thing. You’ll find the same access to settings and a handy paytable, as well as the same game features. The only difference is that you won’t get to keep your winnings, and gambling is why it’s always more thrilling to play real slots.

This free demo is the perfect way to learn how to make the most of this game, without risking your bankroll. That means more to play with once you’ve learned the ropes. You can play Emperor of the Sea for real money at our recommended casino, where you can trust that you’ll be in safe hands.

How to Play Emperor of the Sea

Emperor of the Sea is an elegantly laid out slot featuring five reels and four rows. Get ready for a nautical adventure to the East, where you’ll come across Chinese dragons, koi carp and treasure ships. A calming soundtrack completes the scene, and makes for an immersive playing experience.

This slot boasts a number of adjustable features that you allow you to play however you like best. Choose to play on 88 paylines, or opt for 68 or 38. You can also adjust coin size from £0.01 to £0.05, or toggle coins per line from one to ten. By adjusting these gambling settings you can save choose low bets to play or day, or up the stakes if you’re a high roller.

Other useful features include the Quick Spin option, which allows you to play faster, and the Game History tab. You can easily check the Paytable while playing for more information on symbols and paylines. Next we’ll take you through which symbols to look out for while you play Emperor of the Sea online, and what they all mean.

The ‘Emperor of the Sea’ symbol acts as a Wild, meaning that it can substitute for any other symbol except the Scatter. It can also create a Wild symbol stack, boosting your chances to win. The Scatter symbol is a golden hat, and you will need to land three or more to trigger eight free spins. Free spins feature rolling reels and growing wilds for even more excitement.

The most valuable symbols you can land on the reels are the scatter and wild. Five scatters are worth a massive £4,400.00. Other lucrative symbols include the dragon, green pot, tortoise, koi carp and the ship. Lower value symbols are represented with stylized card values.

Play Emperor of the Sea for Real Money

We love the peaceful look and feel of this game, although the excitement of the free spins is really where it excels. As the reels keep on rolling, you can win again and again. On top of that, each spin adds another wild to the wild stacks. Microgaming haven’t skimped on features, so there’s a lot of winning potential here.

Once you’ve played the free demo you’ll know just how much fun these features are. It’s only when you play Emperor of the Sea for real money that you will be really able to get the most out of this slot though. After all, that’s when you get to keep what you win!

Emperor of the Sea
£50 Bonus For all new players at Betway
Play to Win Real Money Online!
Full T&Cs apply. New customers only. Opt-in required. 100% Match Bonus up to £50 on 1st deposit of £10+. 50x bonus wagering applies as do weighting requirements. Debit Card & PayPal deposits only. This offer is valid for 7 days from your new account being registered.  Irregular gameplay may invalidate your bonus.

When you play for real money, it’s important that you use an online casino that is licensed and regulated. This means that you’ll be safe from scams and that you won’t risk losing your winnings. We only ever recommend licensed casinos, so that our readers can play with peace of mind. Plus, you can even take advantage of a welcome bonus!

What Are the Bet Limits?

Microgaming has made it easy for players to customize bet limits in Emperor of the Sea. With all settings maxed out, the most that you can bet per spin is £44.00. The maximum coin size is £0.05 and you play with up to 10 coins per line. The full number of paylines is 88.

Is Emperor of the Sea Mobile Compatible?

If you’re after a relaxing slot to play while you’re on the go, then you’re in luck. Emperor of the Sea is compatible to play on all mobile devices, whether that’s your phone or a tablet. In fact, the game’s simple layout makes it ideal to play on either Android or iOS devices.

Emperor of the Sea Review: Alternatives Nautical Slots to Try

For more great slots from Microgaming, we think you’ll really enjoy these titles. Dragon’s Myth features breathtaking 3D graphics and a dragon egg gamble option, while Golden Dragon takes on an Eastern theme with simple gameplay. Jurassic Park is based on the most famous dinosaur movie of all time, and Tarzan is your go-to for a jungle jackpot.

Microgaming are also the developers behind Mermaids Millions and Octopays, two other standout slots with an underwater theme. From Blueprint Gaming, there’s the ever popular Fishin’ Frenzy, where you’ll attempt to reel in a big one. Pirates’ Plenty is a swashbuckling affair from Red Tiger Gaming, with a treasure trove of features.

Hopefully we’ve given you all the details that you need to enjoy playing Emperor of the Sea online. If you still have any remaining questions, feel free to email us at contact@online-casinos.com. Below you’ll find useful answers to some of our most frequently asked questions.

Can I play Emperor of the Sea with real money?

Yes! You can play Emperor of the Sea for real money at the site that we've recommended safely and conveniently. You can also browse through some of our many guides to trustworthy online casinos on this site.

Is Emperor of the Sea available on mobile?

Emperor of the Sea is available on mobile. This slot is optimized to play on all types of devices, such as Android, iOS and Windows. You can also play on your tablet, laptop or desktop computer.

It is possible to play Emperor of the Sea for free?

Yes, you can play Emperor of the Sea for free by trying out our free demo. This is a great way to practice the game without having to spend a penny of your own cash.

How do I play Emperor of the Sea?

Emperor of the Sea is a straightforward and easy to play video slot. We take you through all of the rules and special features, step by step in our 'How to Play' guide.