Ted was a smash box office hit back in 2012, as his outrageous behaviour captured the imagination of viewers from across the globe. Ted has now returned larger than life and in digital form, as the star of Blueprint Gaming‘s latest online slot title. 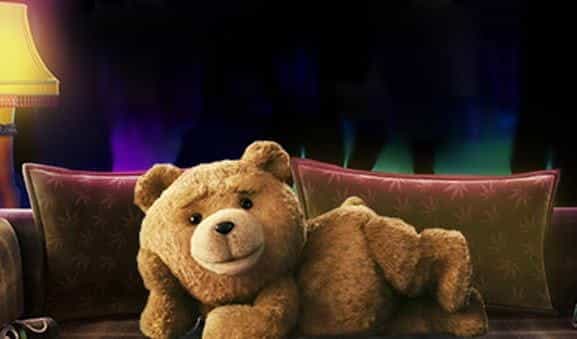 Ted is a raucous, five-reel slot game with a total of 20 fixed paylines, and many of the original film’s elements have been built into the experience. The slot also combines the potential for frequent wins with the largest array of bonus features that we have ever seen, making it a popular choice among casual and serious gamers alike.

Blueprint have certainly pulled out all of the stops in terms of the game’s graphics, with sleek purple reels spinning against the backdrop of a raging party scene in our heroes apartment. Typically, Ted lies in a drunken stupor in the foreground, surrounded by an unhealthy number of empty beer cans! 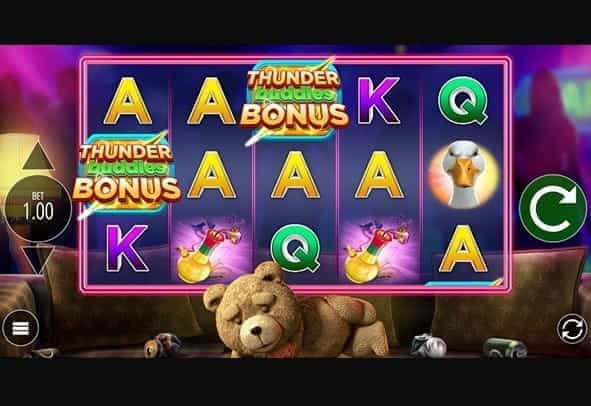 No matter how much you want to party with Ted and his best friend John, however, we recommend that you try the game for free before playing for real. You can access a full simulation through the practice mode above with unlimited top ups of your bankroll as you develop an understanding of the game. Ted is one of the most popular slot games out there right now. To find out more about the most popular games, check out our guide to the best online slot casinos.

As you would expect from such a fun and adventurous title, Ted is a mid to high-variance slot with a huge betting range. There are available coin denominations between 0.25 and 500, while players can also compete for a base game jackpot of 500x their stake!

The process of learning how to play Ted starts by understanding its symbols, with lower value icons including Jacks, Queens, Kings and Aces playing cards. The game’s high-value symbols are represented by more striking imagery, including John’s girlfriend Lori, a swan, a bong and (fittingly) some bottles of beer. The game’s logo is also prominent, as this can appear stacked on the reels and contribute to high value wins.

As for Ted, he is the wild symbol and he can replace almost all others to forge winning combinations throughout the base game. The only symbol that it will not replace is the Thunder Buddies bonus icon which acts as the scatter. If you land three or more of these anywhere in view, you will be transferred to a separate screen with a Wheel of Fortune-inspired game that will reward you with one of five bonus features.

These include the Bar Crawl Bonus, where you select bottles to reveal multipliers, and two free spins rounds, namely the Super Mart Free Spins and Flash Free Spins. The Big Money bonus rewards you with direct entry to the one-off game, where you will be able to compete for at least one huge multiplier of your total bet. Then there is the hilariously titled ‘Wheel of Fortune’, where you select a Ted graphic to reveal an arrow, multiplier boost or free spin to determine your prize. You can collect several prizes during the round, while it may also be possible to qualify for the aforementioned Big Money bonus.

Ted also features a number of exciting modifiers, which can be activated during the base game whenever our hero stirs from his slumber. There are six of these in total, while they are triggered quite regularly to increase your chance of winning and the size of your prizes. There are Laser Gun wilds, for example, where Ted fires beams at the reels to turn symbols wild. We also have Psychedelic Super and Colossal Spins, where Ted takes a huge puff of his bong and blows smoke onto the reels, adding lots of wilds that transform into one, matching icon.

Ted may also spray beer onto a winning combination to create additional combos, while the TV Remote Symbol Streak will also trigger free re-spins with winning symbols frozen in place until there are no more wins to be had!

Make no mistake; Ted includes more bonus features than we have ever seen in an online slot game, with regularly triggered modifiers and some large wins available to players.

There are definitely several reasons to play Ted for real money, apart from sharing in loveable rogue teddy bear’s adventures. You can access the full game by registering with our recommended online casino below, while also qualifying for an exclusive welcome bonus that can be applied across various slot titles!

Overall, Ted comes with a return-to-player (RTP) rate of 95.81%, which is not to be sniffed at. If you’re into licensed slot games, also check out Pink Panther.

Go on a Pop Culture Trip with These Additional Slots

Taking inspiration from movies, TV, and music is hardly a novel approach to making online slot games. Still, though, it’s quite nice to see your favourite titles interpreted as online games, right? That’s why I’ve compiled some game tips for you to get into. Whether you want to see your favourite TV show or movie in reel format, of are aching to see some iconic musical acts in a new packaging, there’s something for everyone here.