Craps is a thrilling and fast-paced game found at casinos both land-based and online. This game’s fanbase is indeed a strong crowd, so it’s no wonder that this game was so quick to be adapted to the online format. Nowadays, pretty much every major online casino has a version or two of craps casino games, and this page is dedicated to helping you find the best gambling spot for this. Apart from live sic bo, craps online games don’t have much competition in their way as it these are quite often the only dice games seen in the non-live game lobby.

Since there are so few dice games on the scene and only a handful of craps games to be found in online casinos, you’ll only meet a couple of software developers who have decided to explore this exciting game in an online format. I’ll take a look at those further down page and give you some more detailed info on finding the best craps casino online.

Other Interesting Articles About Craps

Even though there are not very many craps online games out there, there are more than enough casinos offering this game, each serving up either one or the other developer’s version at a time. That means you’ve got the task of finding the best craps casino ahead of you. But you’re in good hands – in my time spent at online gambling sites, I’ve come up with an approach or two on how to spot the best site for craps online. There’s a lot more to it than just a good-looking shop front – stick around as we go through the most discerning factors when it comes to picking out the best gambling site for this dice classic.

As I mentioned, there’s actually not that much in the way of different variants. The recipe is pretty simple, and, as they say, why change a winning team or reinvent the wheel? Rivalled only by sic bo, online craps enjoys a far greater following in the western hemisphere, while sic bo tends to be popular in Asia. This is apparent in the fact that online casinos offer the former far more than the latter. Whether the Venn diagram of best casino dice games and craps games is indeed a circle, that’s up to subjective opinion – but I do indeed agree with this. No matter if you play one or the other available game, you’ll be well entertained, and knowing in which casinos you can play these games is key.

The above games are the best bet you’ll make (pun intended) when playing at a casino online. Typically, a casino will provide one of the two mainstream iterations of this dice game – either the Vegas Craps by Microgaming or Craps by Playtech. Whichever one you choose; the thrill of this game will remain the same. Make a bet, roll the dice and ride the waves. Though, I have to reward one bonus point to the Playtech variant for providing a Fast Play option, which can speed up the gameplay if you’re a bit hasty. Visually, I also prefer this version – though that’s up to each player to decide. I do have the feeling that the colours are somewhat smoother and, if you’re into that, you can pick what type of background tune you’d like, along with some other customisation features.

The betting limits differ with each casino, but you’ll easily find three-digit upper limits. For instance, 32Red goes as far as £500, and as little as £1, or the equivalent in your local currency. There’s no differentiation between standard and VIP versions – just settle in and start playing! See for yourself in a free demo play version below. 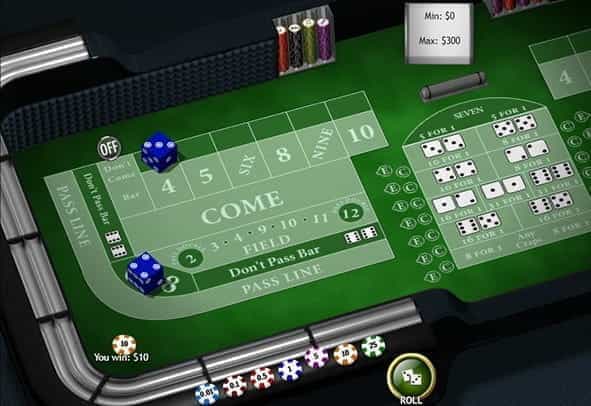 Similar to slots, this dice game also works with the concept known as the RTP. If you’re not familiar with this yet, here’s a brief intro. Basically, during your gameplay, wins and losses will alternate. You’ll lose some money, and then you’ll get some of your wagered cash back. The return to player rate is exactly that – a percentage of your overall wagered money that will land back in your pocket. However, consider this as a theoretical estimate based on extended playing time. And you will likely not play craps online for days on end…

With craps, you’re looking at solid RTPs of mid-to-high 90s. Take, for example, Vegas Craps by Microgaming: with 96.92% you’re better off than with many mainstream slots. And the Playtech variant hits even harder with a 99.53% RTP rate. Again, this is a theoretical rate, so don’t expect to get this percentage back each time. The trick lies in knowing when to quit; leave the table after you’ve hit a net profit, instead of hoping for a greater win only to sink back down.

A foolproof key to choosing the right craps casino online is to not only check which variant is available, but also to take a close look at the available bonuses for new players and examine the conditions tied to each offer. Welcome bonuses are a neat way to pack some extra cash in your pocket, and, at the same time, the casino has got something to entice prospective new sign-ups with. However, not all bonuses are created equal, so knowing your playing style and your habits well will reduce the chances of picking a wrong bonus offer fit.

Craps is not the most rewarding game when it comes to satisfying wagering requirements. So, if you’re after that bonus money as fast as possible, you should be looking at playing online slots. However, if you definitely want to get something out of your gameplay, head to the casino above, where you’ll receive more than what most offer in terms of wagering weight for this dice game. While 5% or even 0% pops up quite often, make sure to pick a casino with at least 10% weighting.

Apart from the Microgaming and Playtech variants, other developers such as Dragonfish, Cryptologic, Netent and bwin have made their own versions of craps. However, after taking the time to review several, a favourite of mine is Microgaming Vegas Craps, which comes equipped with smooth animation that leads you through an upscale casino lobby directly to the craps table. The dice roll occurs with animated dice, and you can watch them tumble and land on the felt. It does a good job of mimicking authentic Vegas vibes. It’s a good starting point for your adventures into the world of online craps. Microgaming is a big-hitter, and you can generally expect great quality from any of their games.

Even though craps is mainly a casino game of chance in which lady luck is the one who decides if you win or lose – I still have a few craps tips I would like to share with you before you play craps for real money.

Place the bets with the best expected return:

No craps system will make you beat the house edge in the long run – the same goes for betting systems – they do not work. However placing bets according to a system can be a lot of fun – but don’t believe that they will make you a winner at the craps table – It all depends on luck.

Look for the Biggest Odds Bets

Odds bets are won to true odds – so there is absolutely no house edge on a odds bet. A few casinos offers you the chance to bet behind even bigger odds bets then the regular max. double your pass line bet. If a casino allows you to bet behind 5x odds this is great. The meaning of 5x odds is simply that you are allowed to place a bet that is 5 times as bit as your original pass line bet – so this will reduce the overall house advantage even further then placing a 2 x odds bet.

The Advantages of Choosing to Play Craps Online

If you’ve already rolled the dice at a land-based casino, you’ll be well familiar with the excitement this game creates. So, playing it online is not a far stretch. Yes, you will experience a totally different environment, far from the crowds, the free drinks and the casino comps in the form of free luxury suites at the Bellagio in Vegas (if you’re a frequent player, that is). On the other hand, online craps carry the benefit of being quick, customisable and potentially with bigger payouts. The minimum bet is also likely to be much lower online than it is at a real, land-based casino. Traditional gambling dens have staff to pay, lights to keep on, and so on, so it is not feasible to allow punters to play craps for pittance. Online, however, where operating costs are lower, you can play for much lower stakes.

The Popularity of Offline Craps

Craps is one of the most popular games in casinos in Las Vegas and throughout the US, however its popularity is not matched in European casinos. Perhaps part of the reason is due to the noise made by the dice themselves, which don’t fit with the quiet casinos in Europe. Indeed, the atmosphere surrounding the craps table in a casino is simply not the same if you compare European houses with Las Vegas casinos. In Las Vegas, the casinos offer far more noise and action than that in a casino in Europe as the players are allowed to cheer and shout when the dice are rolled out on the table. This is great fun in my opinion. Another reason for the popularity of the craps game is the fact that every player gets to throw the dice in turn – whereas the outcome in other casino games depends on the croupier.

What’s In Store for the Future, and News

It’s hard to judge where the game of craps is headed in the 21st century, even for an expert like me. The low number of available casino craps online games shows that the online demand is not mega-high. However, it is one of the most popular land-based casino games, with a high-paced and exciting nature that draws in massive crowds each time. It’s fast and furious, and easy join in. Also, the social aspect of land-based gameplay should not be ignored – everyone can have a slice of the pie. At the same time, who’s to say what virtual reality game-makers have got in store. There’s already been several versions of VR craps, which haven’t really taken off yet. Watch this space for news on when those VR craps experiences are picked up by top real money operators.

Some of the latest casino news

Conclusion: Craps in a Nutshell

Craps has got a lot of appeal stemming from the quick-paced gameplay and the rollercoaster-like nature of frequent wins and losses. Among the handful of casino dice games, craps is definitely the crowd favourite – especially in brick-and-mortar joints. Online, you can enjoy several variants because, frankly, there’s no need to add more bells and whistles in the form of side games or craps hybrid creations when the game formula works. The two most popular variants I’ve reviewed, by Microgaming and Playtech, can be find in many of our top recommended casinos. If craps isn’t your cup of tea, maybe you’d prefer to venture towards the realm of baccarat, or something a bit further removed, like scratch cards or keno.