Illinois has officially become the 15th state to allow legal sports betting after the first sportsbook was launched at the Rivers Casino in Des Plaines. The launch will be of major relief to many local stakeholders, after state gambling regulators took more than eight months to lay the ground rules for the industry.

The next sportsbook is set to open on March 16 at the Argosy Casino Alton, the only other casino that has a clear launch date in mind. Regardless, it is expected that most of Illinois’ 10 casinos will launch sports books over the next year.

In addition to these, residents can expect to see more sportsbooks added at the six new casinos that were approved in last year’s approved gambling expansion bill. Furthermore, the state’s three racetracks will be eligible to open sportsbooks, as well as a number of large stadiums.

The potential for the industry is being lauded by industry speculators, with some experts expecting that the annual revenues could reach between $5 and $10 billion. In fact, many believe that Illinois’ sports betting industry may set to rival or even surpass the markets in New Jersey and Nevada.

With a 15% tax on sportsbook revenues being implemented, the Illinois Governor’s office expects that roughly $60 million a year will be generated for the state each year. This includes money generated from the higher 17% rate applied to Rivers and other casinos that may open in Cook County.

This is due to a controversial stipulation added in the law that applied this penalty period to outsider operators, with the aim to bolster the competitiveness of already existing casinos in the state. Another hotly contested feature of the law sees that betting on Illinois collegiate teams is banned.

The Threat of Illegal Gambling

The launch of Rivers sportsbook comes just in time for the NCAA men’s basketball March Madness tournament. However, due to the aforementioned ban on Illinois’ teams, some are suggesting that residents may be enticed to place illegal bets at unlawful offshore gambling venues.

Illegal gambling sites are already used by many Illinois residents due to their easy access and convenience. Illegal gambling activity could also be fuelled by the fact that there are still no online gambling options available for residents, and even when there are, players will need to register in-person at casinos.

According to Yaniv Sherman, the head of commercial development at 888 Holdings, an online gambling company, the restrictions aren’t likely to inspire these unlawful participants to give up their ways.

“If you’re sitting at home, you have the choice of betting with an illegal operator or driving 45 minutes into a casino and registering a bet on your mobile device, it’s a no-brainer.”– Yaniv Sherman, Head of Commercial Development, 888 Holdings

Sherman highlighted the differences in earnings between states like New Jersey which immediately launched online wagering without in-person registration, and New York and Rhode Island, which introduced more restricted markets similar to Illinois. Despite this, the delay in mobile betting is not without reason.

It is believed that the 18-month delay imposed on outside operators stems from a 2015 ruling that found that DraftKings and FanDuel had broken state law when they offered daily fantasy sports services to Illinois residents. Though the delay will help local casinos launch without major competition, it is also likely a punishment for the earlier offense.

With the new laws approved to help boost much needed state funds, gambling expansion was seen as a way to combat illegal gambling in the state as well. Last week, several Illinoisans were accused of operating an illegal offshore gambling ring, including the mayor of Mettawa in Lake County, proving the prevalence of the issue. 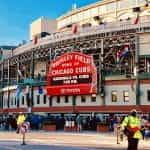