This is the second in a series of highly entertaining Tomb Raider video slots by legendary developers Microgaming. Just like the video games, the slot Tomb Raider 2 – Secret of the Sword the is an action packed adventure with elaborate stunts, explosions and of course Lara Croft, the Tomb Raider herself scantily clad on her adventures. To add to the excitement, this slot has tumbling reels! Check out the demo version below or play at our casino recommendation for real money. 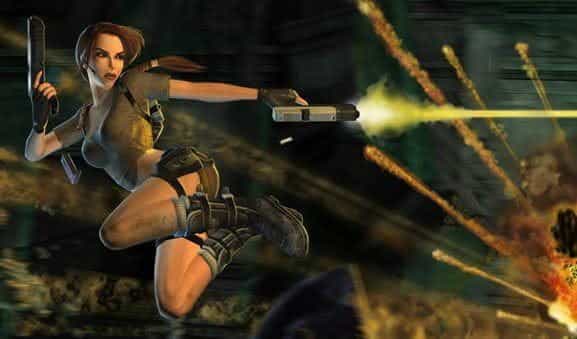 This game’s reel icons are all dominated by the main character Lara animated in different settings. In the search for priceless relics she encounters classic shoot-outs, gnarly motor bike chases and battles rough terrain, all the while dressed in her iconic seductive looks. Relics from her travels reward free spins, sticky Wilds and an exhilarating second screen adventure bonus round. These features have made this game one of the most popular amongst slot fans, and as a result can be found at many of the best slot sites.

Play Tomb Raider for Free and Road Test the Features!

No doubt you’re itching to experience this action packed slot for yourself, which is precisely why we’ve included a fully featured demo version. Take advantage of Tomb Raider the free play version to get a grasp of the game before heading to our casino pick and playing for real money. The nifty thing about the demo version is unlimited play money refills. When you run out of credit, simply refill your free money wallet and carry on playing. 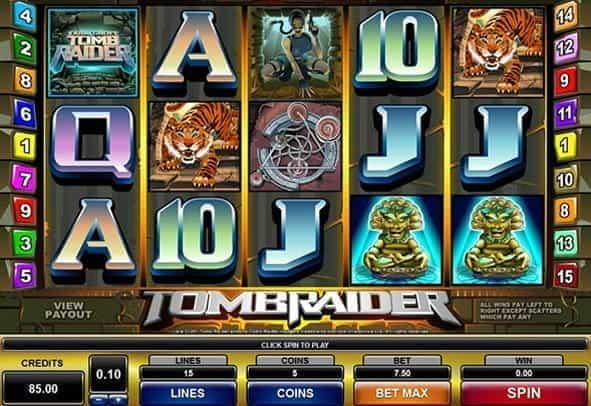 Our charismatic heroine Lara Croft has had many incarnations, starting out as a video game, her success translated into a blockbuster film and now as the lead in her own slot machine. Microgaming have paid impressive attention to detail from realistic graphics to stereo sounds reminiscent of the movie. Check out the original Tomb Raider slot, named simply Tomb Raider, for more adventures on the reels.

How to Win on a Spin! The Rules and Bonuses Explained

This video slot has a standard 5 reels, 3 row formation with 30 selectable paylines. Each reel spins individually from left to right, waiting for the result of the spin to reveal itself. Tomb Raider’s top paying symbol is the portrait of Lara’s face, paying 7,500 coins when 5 hit the reels, this icon also serves as the games Wild substituting for the two bonus symbols which we’ll discuss later.

The Free Spins Bonus is triggered when 3 or more relic symbols hit the reels. The number of free spins awarded is the same as the amount of relics which are spun, for example when 5 relics hit reels in one spin you’ll get the maximum 5 free spins.

The Global Adventure Bonus feature is triggered by activating all 5 reels. To activate a reel, the passport symbol must land on the center position. Activated reels are held until all 5 are accumulated to trigger the bonus game which involves Lara searching for hidden sword fragments across different locations around the world. A successful campaign will reward you kindly, however, beware of booby traps since finding two of these will end the bonus game. There’s a multiplier of up to 450x your stake up for grabs in this lucrative bonus round.

During this round, random symbols will give you the chance to continue you quest onto two more bonus features. Hidden treasure bonuses award one of 3 prizes, either all prizes within a location, a 2x multiplier doubling wins in the current location, a set bonus value, or entry into the shootout bonus. Tomb Raiders shoot-out bonus round presents discs concealing mystery values, select a single disc to shoot and reveal its prize value.

Where to Play Tomb Raider for Real Money

Ready to play Tomb Raider for a real cash prize? We thought so! As much as the demo version is entertaining, nothing beats the thrill of playing a slot for real money. You’ll want to head to a casino to start the fun, that’s why we’ve included our top choice to play this slot. At this casino, new players are offered a fantastic welcome package. Simply head to their site, sign up as a new member and make a deposit to receive your bonus, which can be used against all slots, not just this one!

Each and every slot has a return to player percentage, this is the expected return from playing over an extended period of time. With a high theoretical RTP of 96.56%, we found it hard to find fault with this slot.

Kick-ass female protagonists are not just a Netflix trend; online slots have been on this topic for a while now, so there’s no excuse for you not to try any or all of these amazing titles, all of which feature extras like wilds, scatters, and more. Visually, you’ll find some very advanced graphics in some of these as well, including cutting edge 3D animation. And while you won’t exactly smash the patriarchy by playing online slots, why not give some limelight to the leading ladies of online gaming?