The video game Worms is a cult classic and one that remains popular to this day. Its legacy also lives in the form of this gun-toting sequel by Blueprint Gaming, which is a fun and immersive slot that boasts an outstanding progressive jackpot. 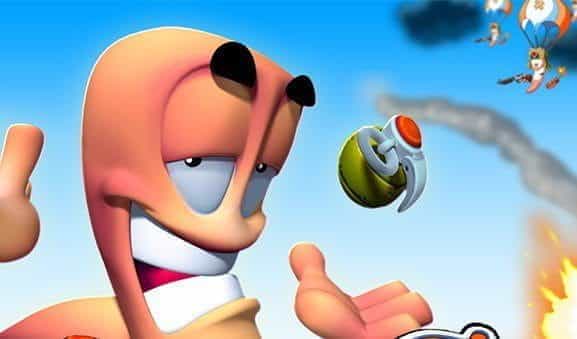 For those who have played the original slot, Worms Reloaded will boast the familiar set-up of five reels and 25 fixed paylines. There are also some superb bonus features on offer, while the lure of that progressive jackpot remains ever-present throughout the base game.

The game itself is beautiful to look at, with a golden frame and fluid reel-set appearing against the backdrop of a battlefield that has been besieged by carnage. The graphics and use of colour make a striking impression, as the worms continue to launch munitions at each other while shrapnel smoulders all around them. 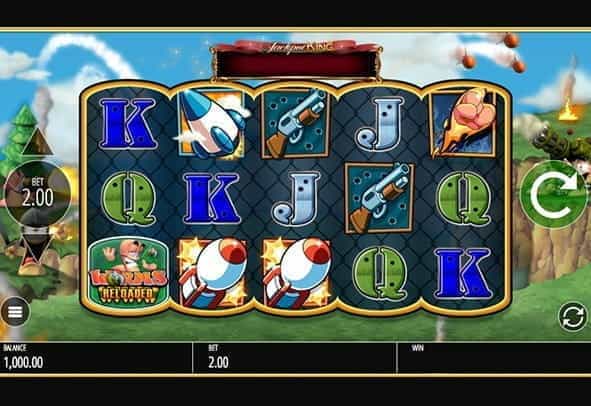 This online slot undoubtedly has a strong video game influence, and this is something that may distract players who did not play the original Worms title. To maintain your focus, you should try the game for free through the practice mode embedded above, while reloading your playing capital as often as you like throughout.

Worms Reloaded is a mid to high-variance game, with available coin denominations between 0.20 and 500. This is an exceptionally healthy betting range, while the presence of a base game jackpot of 500-times your original stake will also be sure to tempt the vast majority of players.

Blueprint Gaming adheres to the online slot game staple of using playing card symbols to replicate the lowest value icons, including Jacks, Queens, Kings and Aces. The higher value symbols include blue and red rockets, a shotgun, a flying, flaming fist and the game’s iconic logo.

When learning how to play Worms Reloaded, you will also note that there is one icon that depicts a playful looking worm in a striking jester’s hat. This will substitute for nearly all other icons (apart from the worms bonus symbol) to form winning combinations during the base game.

If you land the bonus symbol on reels one and three (along with one of four special icons on reel five) you will trigger the game’s main bonus feature. The latter will determine one of four potential games, the first of which is called Battleground Bonus and requires you to keep selecting from the various mines on display to earn cash prizes and multipliers. Next up is the Jetpack Bonus, which introduces UFOs to the game and asks you to select those that you will think will make it to the end of the first stage while avoiding mines and dynamite. If you are successful, you will progress to the Big Money round before selecting a planet to reveal a cash prize.

Thirdly, we have the Blitz Blast Free Spins, which rewards you with unlimited free spins while worm symbols land on reel five. As they do so, you will advance along the multiplier trail until you reach the top and claim your prize. Finally, we come to the Super Sheep Free Spins bonus, during which players are awarded six free spins on a 5×4 reel set as wilds are randomly added to the reels to deliver wins. Watch out for those pesky, but loveable, worms, however, as they have a tendency to shoot the sheep from the reels to end the game abruptly!

You should also keep your eyes peeled for the randomly occurring Worms Grenade, which is marked by the game’s logo exploding and will trigger one of four potential bonus games.

Now there is one symbol that we have yet to mention, and this is the Jackpot King icon. This is arguably the most important symbol, as landing five of these on reels one to five will trigger the progressive jackpot. At this stage, you will be asked to spin a wheel and collect multiple crowns, which enable you to move up the ladder towards the Wheel King. This affords one you final spin and an all-or-nothing shot at the total jackpot prize. If jackpots are your thing, check out our guide to the best jackpot slots online today.

Based on a classic video game and a popular slot title, Worms Reloaded is one of those few sequels that is actually superior to the original. It certainly builds nicely on the first game, adding a huge number of intricate bonus features and the ever-present carrot of a progressive jackpot.

This is certainly enough to encourage you to play Worms Reloaded for real money, and you can do this by signing up for an account with our recommended online casino below. This will also earn you an exclusive welcome bonus that can be deployed on any online slot title within our library, allowing to benefit from free gameplay in the process.

Do not be deterred from the games’ relatively low return-to-player (RTP) rate of 92.66%, either, as this is still competitive given the large wins available through the base game and progressive jackpot feature. If you’re a fan of video game-themed slot games, also check out Tomb Raider.

Other Classics and Crowd-Pleaser Slots

The online gaming industry is no stranger to adapting well-known entertainment items into reel format. Take your pick form a variety of slots based on well-known movies or TV shows, or dip your feet into titles that have acquired an iconic status all on their own. Try some of these titles form my selection below, or start from scratch and browse some other top online casinos and game categories.