#ad
Grand Ivy
18+
This site contains commercial content
Advertisement Disclosure
This independent comparison website helps consumers choose the best available gambling products matching their needs. We offer high quality advertising services by featuring only established brands of licensed operators in our reviews. We receive commission for advertising the brands listed on this page. This may influence brand ranking. Please note that although we endeavor to provide you with up-to-date information, we do not compare all operators on the market.

Dear live casino gamblers, unfortunately we must inform you that the Royal Panda live casino is no longer available in the UK. Instead, we recommend players have a look at the William Hill live casino.

Judging an online casino’s live dealer games used to be so simple. As recent as 12 months ago, it could be argued that it was almost sufficient enough to do so by merely checking the live casino software provider. If it was Evolution Gaming, as is the case with Royal Panda, you were golden. If it wasn’t, you were accepting second best. Today, however, things have changed somewhat, with Playtech’s new state-of-the-art studio in Riga, Latvia, means that we have two evenly-matched players in this area of the market these days. However, Evolution is still the undisputed champion of live casino, and any live suite that’s run by the EGR Live Casino Supplier of the Year for the last EIGHT years in a row is a pretty safe bet. This Royal Panda live casino review will dive below the hood to see how this operator is holding up against the competition.

Not one for detail? That’s cool, you can read my summary of the Royal Panda live casino above and hit the Play Here! button to be redirected to the sign-up page. From there you can register and claim your welcome bonus before heading over to the live games section of the site to get stuck into the roulette, blackjack, baccarat and poker games. For a more detailed look at the live game library, the live dealers, mobile performance and table limits, read on. For a review of Royal Panda’s non-live dealer products, have a look at my main Royal Panda review page.

The Royal Panda live games library is solid, covering all of what you’d expect from a first-class live dealer suite and much more. Your regular Evolution staples are all in place, including Dream Catcher and most of the casino poker variants. There are exclusive Royal Panda live dealers here as well, namely for roulette and blackjack. You’re looking at a selection of more than 50 live tables running at any one time at Royal Panda, spread across eight broad game categories.

For roulette fans, Speed Roulette and Immersive Roulette remain popular, whilst Double Ball Roulette and London Roulette are pleasant, relatively new, additions. In terms of blackjack, you’re looking at a load of tables, but not a huge amount of variety. It’s hard to mix up the twenty-one formula when using live dealers though, and this is still the best live dealer blackjack game library you will find online today. Casino poker fans are covered well with Live Caribbean Stud Poker, Ultimate Texas Hold’em and Three Card Poker. Evolution’s brand-new Texas Hold’em Bonus is yet to come to Royal Panda, but it’s only a matter of time before the brand-new poker variant makes its way over. Finally, it’s worth mentioning Dream Catcher. The television gameshow-style setup looks nothing like a traditional casino game, but since its launch, it has added character and personality to Evolution Gaming’s line-up.

Exclusive Royal Panda games come packaged in as well. I should clear up what exactly is meant by “exclusive” here. Evolution Gaming offers this service to all of its partners and rather than involving unique game variants or rules changes, exclusive Royal Panda Roulette is simply a classic European Roulette table plastered with Royal Panda logos with a matching backdrop. The same is true of Royal Panda Blackjack. However, what the service does allow operators to do is design promotions and offers around the outcomes of these live dealer games. As the tables are not shared with customers of other online casinos, such as the regular Evolution games, the potential for operator specific deals is realised.

Whilst there is some truth to the claim that playing at one Evolution Live Casino is indistinguishable from playing at another, table limits play a key role. The game library at Royal Panda might look identical to that of LeoVegas, Betway, or any other Evolution-powered live suite, but the minimum and maximum bets vary from operator to operator. For 90% of online casino gamblers, the boundaries are broad enough to satisfy whatever they want to risk, but for a small minority or players looking to play either very low or very high stakes, table limits are important.

It’s important to pay close attention to the actual table you sit at when you are playing live dealer casino games. This is especially true of blackjack. The large number of tables playable at any given time is because of the need to offer players a wide range of limits. You can see the specific minimum and maximum betting values for any given table by hovering your mouse over the game window for a second or so. For roulette, the minimum wager refers to the value of a single bet within the game. It is common for there to be a minimum total required to be eligible for the spin. For example, you might be able to place 20p on number 14, but you’ll need to risk a total of £1 before you can take part in the game.

Are the Live Dealer Games Playable on Mobile Devices?

I get asked this question a lot, and my answer is always the same. Yes, of course you can. Mobile internet use has overtaken desktop internet in the United Kingdom. The casino business has been online for more than a decade now, and these operators know how to earn a quid or two. The idea that you could be a successful online casino without offering your services on mobile devices is becoming more and more infeasible by the day. Royal Panda live casino is delivered excellently on mobile, with almost all of the desktop games making the jump across the platforms. For more information on specifications and non-live mobile games, check out my Royal Panda mobile app review.

Evolution Gaming has a total of seven studios throughout Europe. The largest of which is in Riga, Latvia. In 2013 the Riga studio opened its 100th live table to become the largest single-site casino operation in Europe. The studio still holds that record today. It’s Grand Casino in Bucharest was the first fully certified live casino facility in Romania. The company also recently announced it has plans for another new studio in Tbilisi, Georgia. Another of its big studio is in Tallinn, Estonia. As a result of this wide Eastern-European reach, most of the Royal Panda live dealers you will encounter come from these regions.

All the dealers I encountered whilst reviewing Royal Panda were professional, brought some personality and atmosphere to the live games they were running. All communicated well with punters leaving comments in the live chat feature that features on all of Evolution Gaming’s games.

As I mentioned earlier, this idea of having an exclusive live table with operator-specific branding opens the potential for online casinos to run promotions on live dealer games. Royal Panda takes full advantage of this with its Lucky 21 blackjack promotion which you can read about in my Royal Panda bonus review.

There is no dedicated deposit here for the Royal Panda live casino, but you can use your regular welcome bonus for playing live dealer games though. Just be aware that you will only be making a 10% contribution towards the 35x wagering requirement though.

Royal Panda casino live is delivered by Evolution Gaming. I cannot wax lyrical enough about this powerhouse. The company launched in 2006, but it was in 2009 that it really started to pick up the pace. That year, it expanded its Riga studios to a 2,000-square meter facility enabling dedicated tables and environments to be launched by online casinos. The same year, the company picked up EGR Live Casino Software Supplier of The Year and Software Rising Star of the Year. The resulting eight years have been all about Evolution dominance in this market. Not even Celtic win this many consecutive titles. The list of total awards the company has won is exhausting to cover. Put simply, Evolution Gaming is to live casino what Serena Williams is to women’s tennis. Not only do you know she is going to win, you know she going to make the competition look like toddlers.

Online casino players looking for some live dealer action can choose Royal Panda safe in the knowledge that there really is no risk of disappointment here. When you sign up with Evolution Gaming in this business, it’s really quite difficult to mess it up from there. Royal Panda has gone further and incorporated a really nice live casino promotion with its Lucky 21 blackjack draw, and now that the site is in the hands of LeoVegas, you can be sure that its future remains secure.

Any balanced review takes into account both the strength and weaknesses of a product, but I’m honestly struggling to find fault with this live package. The only tiny criticism I’ve got here is that the brand-new Texas Hold’em Bonus Poker game was not available at Royal Panda’s live casino suite despite having already been released on LeoVegas. But I’m nit-picking, as at the time of writing the new game has only been out a day or so.

If something you’ve read in this review doesn’t make sense, or you are looking for more answers about Royal Panda, then please submit your questions to contact@online-casinos.com. Here is a common request sent by our visitors.

Where is the Royal Panda casino live broadcast from? 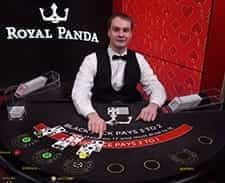 Take on the Royal Panda live dealers at blackjack and earn big winnings. 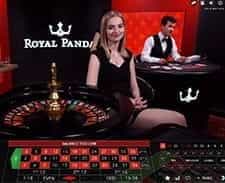 Try your hand at many different roulette tables, each offering a unique challenge.